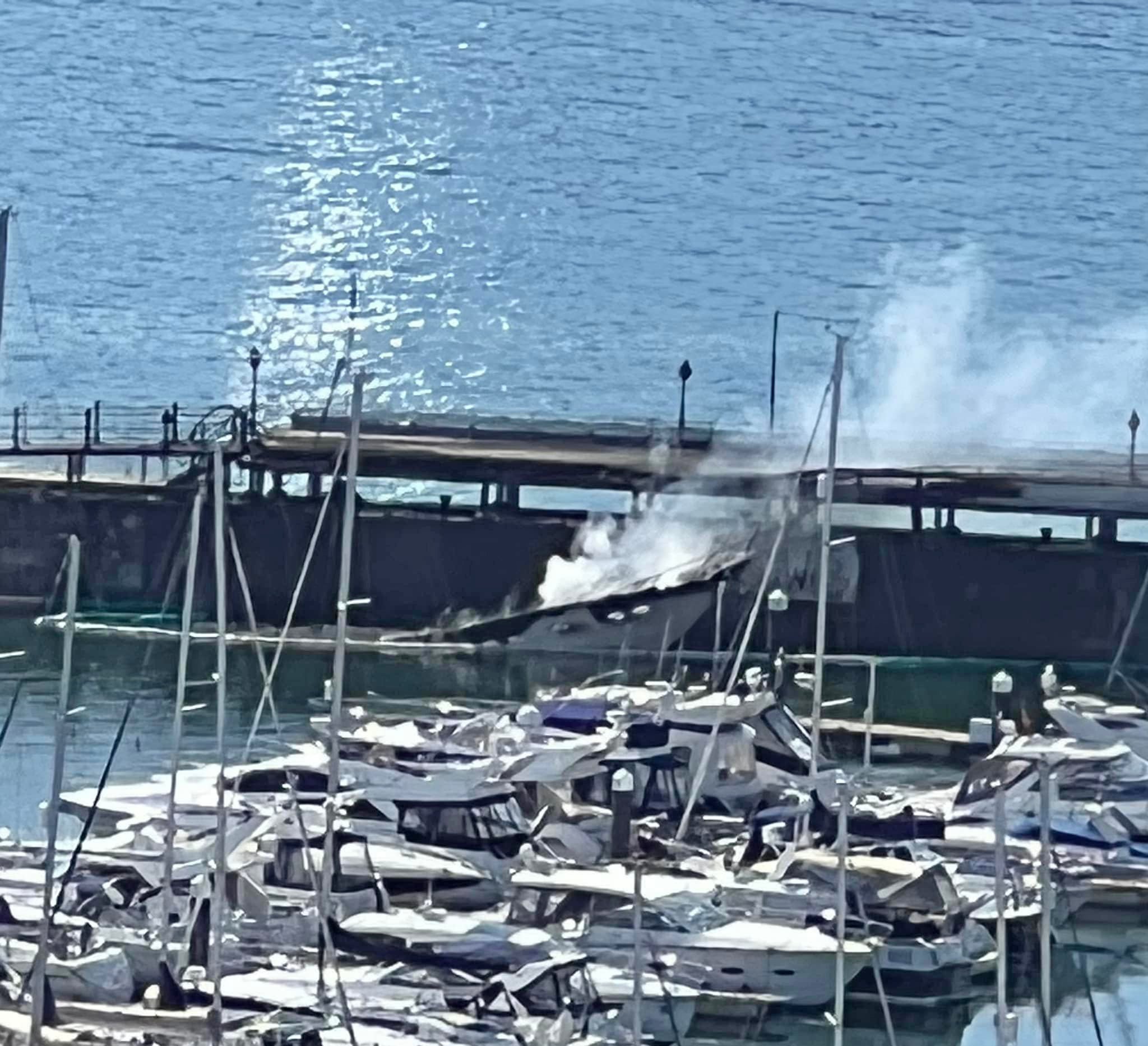 ork is under way to prevent pollution after a blaze on a superyacht carrying around 8,000 litres of fuel which later sank in a marina, raising fears of an oil spill.

Firefighters battled for hours to extinguish the fire as it ripped through the 85ft vessel in a harbour in Torquay, Devon, on Saturday.

Emergency services declared a major incident and officers evacuated a nearby beach and roads, with one witness describing the blaze as “like a fireball”.

Dramatic footage on social media showed thick plumes of black smoke billowing across the harbour and flames enveloping the boat.

No injuries were reported but the harbour was temporarily brought to a standstill, with fears over a large amount of diesel on the yacht.

Witnesses described seeing the flames burn through the rope mooring the boat, cutting it adrift so it floated along the marina before hitting a bridge, which acted as a barricade.

It later sank and by 6pm firefighters were damping down the pier, DSFRS said.

It was quite a spectacle, it was just an unbelievable sight

Torquay-based musician David Balmer, 58, said the sinking raised fresh concerns about fuel on the boat leaking into the water.

“That could create another hazard in the harbour. They’re worried about the fuel getting into the water and into the harbour, which is obviously the last thing you want,” he told the PA new agency.

“There were masses of people around. It was engulfed in flames and there was this huge cloud of black smoke.

“It was quite a spectacle, it was just an unbelievable sight.”

One witness said onlookers had been told to leave the area because “there might be an explosion” and were moved to a safe distance away.

After the yacht went under, the case was handed over to the harbour master and the Environment Agency (EA).

The EA said officers were helping with advice and guidance on bathing water and on Saturday issued two pollution alerts for the nearest beaches to the marina.

It is understood more pollution recovery equipment is expected to arrive from Birmingham on Sunday.

An EA spokesperson said: “Our officers are providing assistance to the Harbour Master Authority (HMA) to contain the oil and fuel within the booms that have been set up in the marina.

“The Environment Agency will be providing further advice in the coming days to the HMA on waste management as part of efforts to recover the sunken yacht.”

Grace Kedzior-Macdonough, 20, was visiting the seaside town with her partner when she heard “bangs or explosions” coming from the harbour.

She told PA she saw crew in neighbouring vessels spraying hoses to stop them catching alight as the fire was “spitting” flames out on to the water.

“We were just confused at first because we were just sat round the harbour and there was just this black smoke coming from nowhere.

“It was just getting worse because it broke off from the harbour because the ropes burned off and that’s when it travelled down (to) the bridge.”

Police said on Saturday that the cause of the fire was being treated as unexplained and inquiries were continuing.

A Devon and Cornwall Police spokesman said: “Police were called at 12.10pm today to Princess Pier in Torquay following reports of a fire on a yacht moored in the marina.

“There have been no reported injuries at this time.”

Torquay Marina said in a statement that the area had been saved from a “major catastrophe” by authorities and emergency services at the scene.

“We had to deal with a major incident today. Sadly one of our boats was destroyed by fire. I can confirm there were no casualties or other boats damaged,” the statement said.

“Due to a fantastic team effort by the emergency services, harbour authorities, my staff and our customers, we were able to contain the emergency situation and avoid a major catastrophe.

“We now have several booms around the area to protect the environment. Please continue to be patient during the clean-up process.”

The state of Washington agreed last week to dismiss an appeal of a decision that found the state’s truck driver meal and rest break...
Read more

A New York judge on Friday set an Oct. 24 trial date for the criminal case against the Trump Organization and its former chief...
Read more

The state of Washington agreed last week to dismiss an appeal of a decision that found the state’s truck driver meal and rest break...
Read more
Safety Apparel

A New York judge on Friday set an Oct. 24 trial date for the criminal case against the Trump Organization and its former chief...
Read more
Emergency