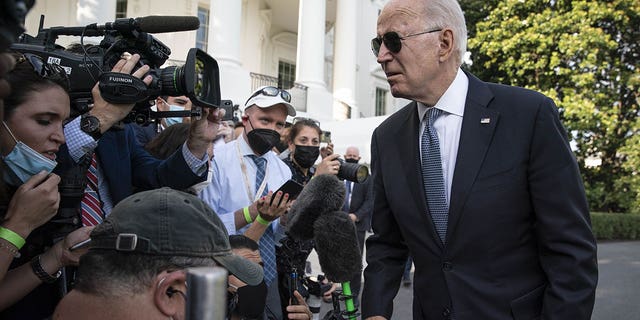 A new argument over whether Joe Biden or Donald Trump has gotten worse media coverage should not turn on obscure algorithms.

A more serious debate about whether the media needs to go easier on Biden is actually pretty troubling.

I’ve covered dozens of studies over coverage being declared positive, negative or neutral, and here’s the key fact: These studies can be useful as a rough gauge, but fail to account for tone and intensity.

Consider: A story that says “Joe Biden is sliding in the polls as he grapples with multiple crises and his agenda is stalled on Capitol Hill” would be scored negative.

And a story that says “Donald Trump is a racist, misogynist and psychopath who is determined to destroy this country” would also be scored negative.

But there’s obviously no comparison. The vast majority of even the toughest stories on the incumbent president might challenge his competence but not his character.

IT’S BIDEN’S WASHINGTON, BUT THE PRESS CAN’T GET ENOUGH OF TRUMP

Many of the stories on the former president — to this day — depict him as a fascist who would stop at nothing to install himself as a dictator.

The subject caught fire when Dana Milbank, a liberal Washington Post columnist, used data from an outfit called Fiscal Note to argue that Biden’s coverage for the last four months has been as bad as — and at times worse than — the coverage of Trump for the same four months last year.

Journalism is being undermined by a belief among some that reporters need to be activists, supporting either Donald Trump or Joe Biden.
(Getty Images)

Data guru Nate Silver says many of the Biden stories are “totally random. Lots of stories about the stock market. Many have nothing to do with Biden at all (‘Haiti President Assassinated At Home, Wife Wounded’).”

But just for the sake of argument, let’s assume the analysis was accurate. This is Milbank’s conclusion:

“My colleagues in the media are serving as accessories to the murder of democracy.”

“We need a skeptical, independent press. But how about being partisans for democracy? The country is in an existential struggle between self-governance and an authoritarian alternative. And we in the news media, collectively, have given equal, if not slightly more favorable, treatment to the authoritarians.”

So this is the mindset: Biden may have his flaws, but Trump is basically evil (Milbank runs through Covid, election fraud, Jan. 6, etc.). If the media are equally tough on Biden and Trump, they are choosing the “wrong” side. Ergo, journalists must ease up on Biden.

SUBSCRIBE TO HOWIE’S MEDIA BUZZMETER PODCAST, A RIFF OF THE DAY’S HOTTEST STORIES

This is exactly the approach that has cost the media so much credibility over the last half-dozen years. Milbank is arguing that the stakes are so high that journalists must be activists, that they have an obligation to tilt the playing field toward a preferred outcome. And that is what has undermined the profession.

President Biden is seen outside the White House before boarding Marine One in Washington, Friday, July 30, 2021.
(Getty Images)

How is it that we haven’t learned this lesson? The solid reporting on Trump has certainly made clear what he did, but the overtly hostile hasn’t convinced anyone who doesn’t already hate the guy.

Ross Douthat, the New York Times conservative and no fan of Trump, says it is “this view of the press’s role that actually empowers demagogues, feeds polarization and makes crises in our system much more likely.”

He contends “the essential problem with the idea that just a little less media neutrality, a little more overt alarmism, would put Trumpism in its place. You can’t suppress a populist insurgency just by rallying the establishment if suspicion of the establishment is precisely what’s generating support for populism in the first place.”

And if Biden’s coverage has turned pretty grim, says Douthat, “it’s turned grim for reasons that an objective and serious press corps would need to acknowledge in order to have any credibility at all.”

Again, I don’t accept the notion that, for all of Biden’s missteps, the press has vilified him with Trump-like passion. But what the mainstream media have done has backfired big time.

Footnote: Dana Milbank has, on the other hand, offered a touching tribute to his boss, Washington Post Editorial Page Editor Fred Hiatt, who recently died unexpectedly at age 66. Fred is an old friend who was smart, warm, gracious and a first-class human being – and when his regular conservative columnists turned against Trump, he made sure to recruit some pro-Trump voices.