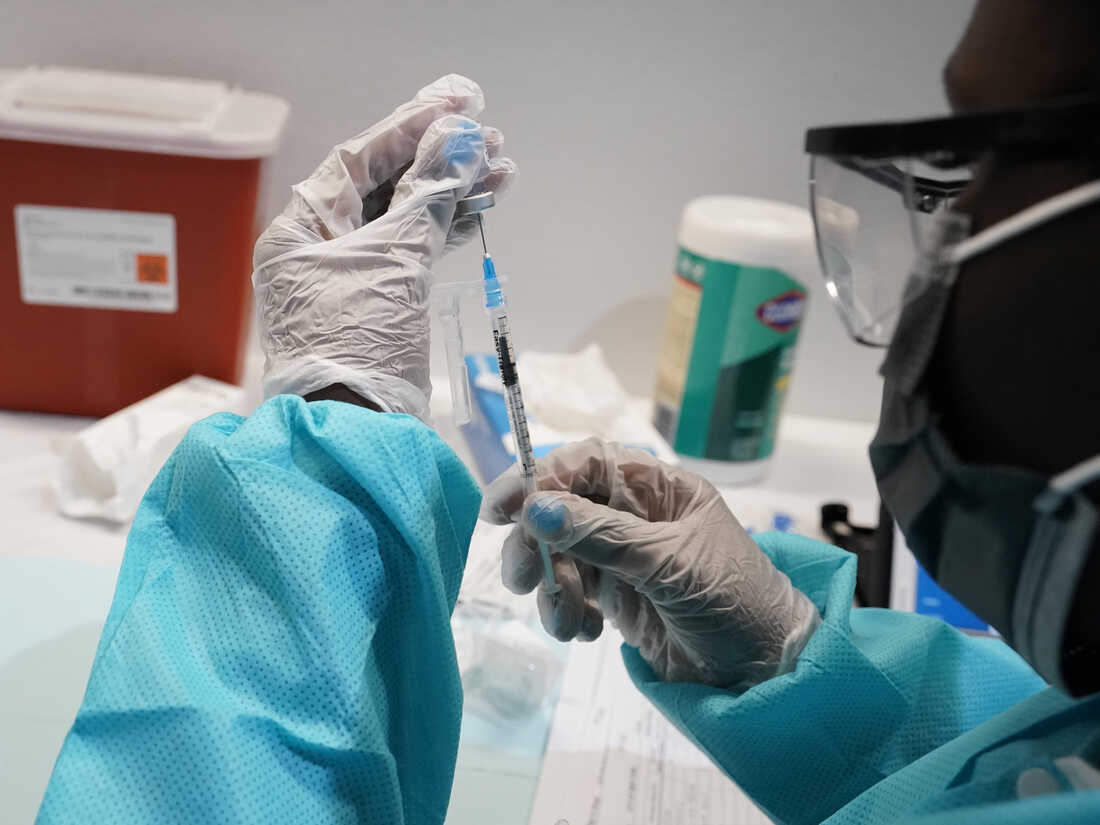 A Palestinian medic administers a dose of the Pfizer-BioNTech COVID vaccine during an inoculation campaign at a medical center in Gaza City on Aug. 23.

The Food and Drug Administration has given its full approval of the Pfizer-BioNTech COVID-19 vaccine, calling it a “key achievement for public health.”

The approval, says the FDA, means “the public can be very confident that this vaccine meets the high standards for safety, effectiveness, and manufacturing quality the FDA requires of an approved product.”

How does a drug get final FDA approval?

Back in December 2020, the FDA allowed the Pfizer vaccine to be used under an emergency use authorization. Pfizer and BioNTech applied for full approval in May.

Now that it has gone through a full review by a U.S. regulator, this final stamp of approval means the Pfizer vaccine can now be marketed with other approved vaccines and drugs.

The process of final approval, outlined by the FDA, requires an analysis of the drug’s benefits that also examines its risks and looks at clinical trials from the drugmaker. Much of this was already done when the FDA authorized the vaccine’s emergency use.

But among the measures the FDA required for full approval that weren’t required for emergency use were data on how people fared six months after being fully vaccinated. The FDA also inspected manufacturing facilities in the intervening months.

The final approval also means the Pfizer vaccine gets a brand name: Comirnaty (it’s pronounced koe-mir’-na-tee, according to the FDA).

Should kids under age 12 still not get vaccinated?

The FDA still does not recommend that children under age 12 get the Pfizer vaccine.

Janet Woodcock, the acting FDA chief, said it “would be a great concern” for children under 12 to get the vaccine, as the FDA does not have the data on what the proper dosage would be or data on the safety of the vaccine for younger kids.

“They are not just small adults. We have learned that time and time again,” she said.

Peter Marks, the director of the FDA’s Center for Biologics Evaluation and Research, said that trials regarding vaccinating children under 12 are still ongoing and that the FDA is waiting for data to be submitted.

The American Academy of Pediatrics also warned doctors not to give vaccines to children under 12 until authorized by the FDA.

A health care worker fills a syringe with the Pfizer-BioNTech COVID-19 vaccine at the American Museum of Natural History in New York.

Is there a legal difference, when it comes to mandates, between emergency use and full approval?

There isn’t a lot of clarity on this. Law professor Lindsay Wiley from American University in Washington, D.C., told NPR it’s an open question right now whether having the full approval makes a difference in terms of legal authority to issue a vaccination requirement.

She said a few court cases have started to navigate the legal aspects of what it would mean for states and private employers to require a person to accept an unapproved product — but so far, it seems that courts are not eager to use FDA approval as a limitation on vaccine mandates.

What does this mean for school and employer vaccine mandates?

It’s likely we’ll see more vaccine requirements put in place now that there is one vaccine with full FDA approval.

The Defense Department, for example, has already announced that all service members will be required to get the vaccine now that the FDA has approved the Pfizer vaccine. Without the approval, it would have taken a presidential waiver to allow the secretary of defense to require service members to be vaccinated.

Even before the FDA’s full approval of the Pfizer vaccine, federal departments including the departments of Health and Human Services and Veterans Affairs had mandated that their employees who work with patients get the vaccine.

Misty Cunningham yells at a passing motorist outside Winchester Medical Center on Aug. 10 in Winchester, Va. Health care workers went on strike over a COVID-19 vaccine mandate by their employer Valley Health.

Outside of government entities, it’s possible that more universities will require vaccines for adults over age 18, something that many states have long required for meningitis, for example.

How will the FDA approval impact those who are vaccine hesitant?

Health officials are hoping the full approval will provide some peace of mind for those who have felt hesitant about getting vaccinated.

“While millions of people have already safely received COVID-19 vaccines, we recognize that for some, the FDA approval of a vaccine may now instill additional confidence to get vaccinated,” Woodcock of the FDA said.

The White House’s chief medical adviser, Dr. Anthony Fauci, told NPR’s All Things Considered that he estimates the FDA’s “official stamp of approval” will convince as many as 20% of the 90 million vaccine-eligible people in the U.S. who are still unvaccinated to sign up.

“I believe that those people will now step forward and get vaccinated,” he said.

A Kaiser Family Foundation survey from June showed that roughly 30% of unvaccinated adults who felt hesitant about the vaccine said a full approval would mean they would be more likely to get vaccinated.

But the same survey showed that two-thirds of adults either already believe the vaccines available in the U.S. are fully approved by the FDA or are unsure if they have approval.