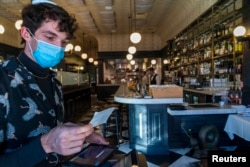 The Biden administration is contending it has the legal authority to mandate that large U.S. employers force their 84 million workers get vaccinated against the coronavirus by January 4, or else wear face masks in the workplace and submit to weekly testing.

A U.S. appellate court last week temporarily blocked President Joe Biden’s mandate, pending further court action, with a nationwide stay of his directive he says is aimed at curbing the ongoing pandemic that has killed more than 750,000 people in the U.S. The death toll is more than in any other country.

Numerous Republican state governors have voiced their opposition to the Democratic president’s order. The governors and some employers filed suit to block it, claiming the vaccination and masking mandate exceeds the government’s authority.

But in a 28-page filing Monday at the Fifth Circuit Court of Appeals, the Justice Department contended that keeping the mandate from being imposed “would likely cost dozens or even hundreds of lives per day, in addition to large numbers of hospitalizations, other serious health effects, and tremendous costs. That is a confluence of harms of the highest order.”

The government’s Occupational Safety and Health Administration (OSHA), under Biden’s directive, issued the mandate last week, forcing companies with at least 100 employees to require unvaccinated workers to wear masks indoors starting December 5 and to get vaccinated by a month later or to undergo weekly testing at work.

The White House said Monday that legal challenges to White House orders are commonplace and urged employers not to wait for a final legal decision before requiring their workers to get vaccinated, as several prominent companies have already done.

A federal judge in Texas ruled Monday that United Airlines, one of the biggest U.S. air carriers, can put its unvaccinated workers on unpaid leave, even if the airline had already granted them medical or religious exemptions. About 2,000 United workers are affected by the ruling, but the airline said 99.7% of its employees are fully vaccinated.

U.S. District Judge Mark Pittman in Fort Worth, Texas, rejected claims that the airline’s strict vaccination mandate put workers in an “impossible position” by forcing them to choose between getting inoculated or being placed on unpaid leave. He said human resource policies are up to the company.

The coalition of opponents to Biden’s mandate has argued that it is an unlawful overreach that exceeds OSHA’s authority. The opponents contend that Congress intended for OSHA to be an agency with limited jurisdiction, to protect workers from dangerous workplace substances like asbestos — “not a public health agency with wide-ranging authority to address communicable diseases through regulation.”

On Sunday, Ron Klain, Biden’s White House chief of staff, told NBC’s “Meet the Press” show, “I’m quite confident that when this finally gets fully adjudicated, not just a temporary order, the validity of this requirement will be upheld.”

Klain characterized the Biden vaccination order as “common sense” to help end the pandemic in the United States.

He said if OSHA “can tell people to wear a hard hat on the job, to be careful on chemicals, it can … put in place these simple measures to keep our workers safe.”

The U.S. Supreme Court last month approved a vaccination mandate covering health care workers in the northeastern state of Maine but has yet to consider a broad national mandate such as Biden’s order affecting private businesses or his order requiring 4 million federal employees and contractors working for the federal government to get vaccinated by November 22.

Numerous Republican state governors opposed to the Democratic president’s national mandate, along with some government employee unions and individual workers, have filed lawsuits in an effort to block Biden’s orders, all claiming they are an overreach of his authority.

In filing a lawsuit against the Biden order affecting workers at private businesses, Texas Attorney General Ken Paxton called the vaccine mandate “a breathtaking abuse of federal power” that is “flatly unconstitutional.” He contended that the mandate goes beyond OSHA’s “limited power and specific responsibilities.”

On Saturday, the conservative-dominated Fifth U.S. Circuit Court of Appeals temporarily blocked the Biden mandate for private businesses, saying there were “grave statutory and constitutional” issues concerning the rule.

White House aide Cedric Richmond defended the use of the OSHA authority to mandate the vaccinations, telling the “Fox News Sunday” show, “OSHA’s job is to protect workers. If it means doing something tough, that’s what this president does.”

It appears that hundreds of thousands of federal workers have been vaccinated ahead of the deadline in two weeks, but opposition to the shots has emerged at some agencies, especially those related to law enforcement and intelligence.

Other lawsuits filed by workers unions and individuals that contest Biden’s mandate remain to be adjudicated. There is no testing option available for government employees as there would be for workers in the private sector.

The number of new coronavirus cases has been diminishing for several weeks in the U.S., but even so about 70,000 additional cases are being recorded every day.

More than 194 million people in the U.S. out of its population of 333 million have been fully vaccinated. But millions of adults have for various reasons refused inoculations, curbing Biden’s effort to fully control the pandemic.