Transport for London bans e-scooters on transit network after fires 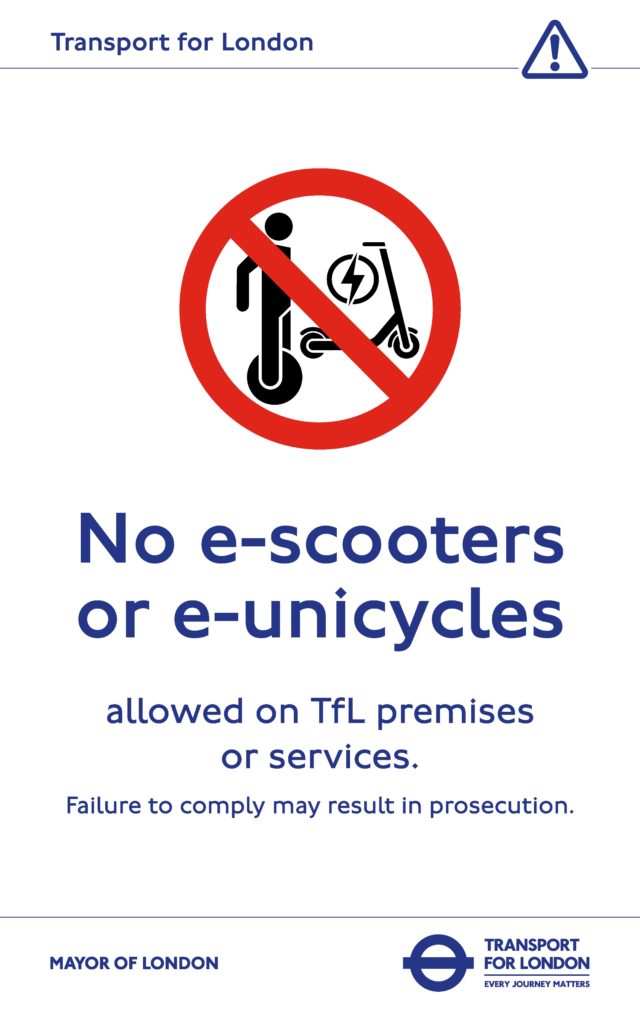 Transport for London (TfL) has announced that all privately-owned e-scooters and e-unicycles, including those that can be folded or carried, are now banned on London’s transport network.

According to TfL, the ban, which came into effect on Monday, December 13, is the result of safety concerns about the items following recent fires on TfL premises and services. Customers in possession of such devices will not be permitted to enter any premises on London’s transport network or travel on any of the services, including on the Tube, buses, Overground, TfL Rail, Trams and DLR.

The ban does not include mobility scooters that are permitted on the network or foldable e-bikes.

Recently there have been incidents of privately-owned e-scooters and e-unicycles catching fire whilst on TfL services or infrastructure. In response to these incidents, TfL has undertaken further work to review the safety of the vehicles and their suitability for carriage on the TfL transport network.

This review has found that the incidents that occurred were caused by defective lithium-ion batteries which ruptured without warning. This led to fires that caused toxic smoke to be released. TfL considers that if this were to happen again and fires occurred in an enclosed area like a Tube train or a bus, there could be significant harm to both customers and staff, as well as secondary injuries from customers trying to escape the area.

Whilst privately owned e-scooters remain illegal to use in public spaces, they are widely available for purchase. Private e-scooters and e-unicycles are currently unregulated, meaning they are not currently required to meet any minimum vehicle standards. TfL will keep these changes under review pending any future changes to legislation by the government regarding e-scooters and e-unicycles, specifically around safety standards. TfL is collecting data from the rental e-scooter trials to help shape future policy on safety standards in London and the rest of the UK.

TfL’s trial of rental e-scooters, which began in June 2021 as part of trials permitted nationally by the Department for Transport (DfT), offers the only e-scooters legally allowed on London’s roads. Rigorous safety measures are central to the trial, with vehicles that exceed the DfT’s regulatory requirements for trial vehicles and that are considerably more robust than the most common private e-scooters. The safety criteria for the trial were agreed by TfL, London Councils, the participating boroughs and the DfT, as well as with key stakeholder groups and other cities that have previously launched similar trials. These e-scooters are also not currently allowed on TfL services.

Lilli Matson, TfL’s chief safety, health and environment officer, said, “Our primary concern is always for the safety of our customers and staff. We have been extremely worried by the recent incidents on our public transport services, which involved intense fires and considerable smoke and damage. We have worked with London Fire Brigade to determine how we should deal with these devices and, following that review, we have decided to ban them. Customers who try to bring them onto our network will be refused access to our stations and premises, and not be permitted to use any of our services.”

Anybody who does not comply with the ban may be refused entry, directed to leave the network or face a fine of up to £1,000. The Metropolitan Police has also appealed to retailers to be responsible in selling e-scooters and has reminded Londoners that the use of privately-owned e-scooter and e-unicycles on public roads, cycleways and highways is illegal.

British Transport Police superintendent, Lisa Garrett, added, “Our priority is the safety of passengers and the staff members working across Transport for London services. We’ll be working alongside frontline staff to engage with the public on this issue and enforce where necessary.”

The Federal Motor Carrier Safety Administration is moving closer to settling a controversy over how to define freight brokers while also clarifying the level...
Read more

Comment on What’s the status of AB5 and its possible impact on trucking in California? by Sonu Babbar

It’s been a quiet few months in the battle over whether California’s independent contractor law, AB5, will be applied to trucking in that state....
Read more

The Log Book is a weekly rundown of human-interest stories related to the transportation industry. This week: Theresa DeSantis takes home a second SuperRigs...
Read more

Viewpoint: Rail regulators have been afflicted with ‘Beltway fever’

The Federal Motor Carrier Safety Administration is moving closer to settling a controversy over how to define freight brokers while also clarifying the level...
Read more
Safety Apparel

Comment on What’s the status of AB5 and its possible impact on trucking in California? by Sonu Babbar

It’s been a quiet few months in the battle over whether California’s independent contractor law, AB5, will be applied to trucking in that state....
Read more
Safety Apparel

Viewpoint: Rail regulators have been afflicted with ‘Beltway fever’