Top US Health Officials: Tough Fight Ahead Against Omicron Variant 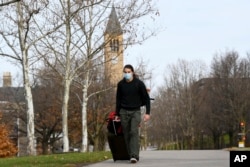 Two top U.S. health officials said Sunday the country faces a “tough few weeks” ahead to curb the spread of the omicron variant of the coronavirus, just as the strain is also leading to an increase in COVID-19 cases around the world.

“We’re in a world of trouble in the next few weeks,” Dr. Francis Collins, the retiring director of the National Institutes of Health, told the “Fox News Sunday” show. “The virus has thrown us a curve ball.”

In addition, millions more people in the United States have received their first inoculations but have yet to get booster shots that health experts say are essential to greatly increasing their protection against the omicron strain.

Dr. Anthony Fauci, the country’s top infectious disease expert and President Joe Biden’s top medical adviser, said on CNN’s “State of the Union” show, “If you want to be optimally protected, get boosted.”

Fauci, however, said the rapidly multiplying number of coronavirus cases will lead to “a significant stress” on the availability of hospital beds in some particularly hard-hit parts of the U.S.

At the moment, “We’re trying to get a veil of vaccinations” across the country, Fauci said, but Americans also need to wear face masks in crowded public settings. In addition, he said the country needs to do better in providing COVID-19 tests.

Biden is set to address the nation Tuesday to announce how the government is preparing to respond to the growing number of cases caused by the variant.

The surge in cases in the U.S. has resulted in some universities announcing that they have moved or will be moving to remote learning, including Harvard, which said it will engage in remote learning for at least the first three weeks of January.

In Europe, the growing number of cases has caused some governments to call for restrictions reminiscent of COVID closures imposed earlier in the pandemic that dates from the first weeks of 2020.

“The Netherlands is shutting down again,” Prime Minister Mark Rutte said Saturday in a televised address. The new measures, beginning Sunday, Rutte said, are because of a “fifth wave” of COVID-19, due to the highly contagious omicron variant.

Under the new rules, all non-essential shops will be closed through at least mid-January. Only two guests will be permitted to visit a household at one time. Four guests, however, will be allowed during the coming holidays from December 24-26 and New Year’s Eve and New Year’s Day.

Schools will be immediately closed until at least January 9.

While the Netherlands boasts an 85% inoculation rate, only 9% have received booster shots.

Jaap van Dissel, the chief of the Dutch outbreak management team, said the shutdown will give people time to get their booster jabs and hospitals time to prepare for the possible surge in cases.

Meanwhile, Germany has declared Britain as an area of variants of concern because of its increasing number of omicron cases.

People entering Germany from an area of variants of concern must quarantine for two weeks, regardless of their vaccination status or whether they have recovered from the COVID-19 illness.

Scientists are warning that the British government needs to go further to prevent hospitals from being overwhelmed amid the surge. The warning comes after the government reimposed an indoor mask requirement and ordered people to show proof of vaccination or a recent negative coronavirus test when entering nightclubs or large venues.

The new variant has fueled infections in Britain close to the peak levels of early 2021.

Sajid Javid, Britain’s health minister, has been highly critical of the unvaccinated, blaming them for “taking up beds” that could be used by other people.

In France, the government said it would start inoculating children between the ages of 5 and 11 on Wednesday. Prime Minister Jean Castex said Friday that the omicron strain was spreading like “lightning” and proposed requiring proof of vaccination for those entering public establishments.

More than 5.3 million people have died of COVID-19 globally since the coronavirus that causes the disease emerged two years ago, according to the Johns Hopkins University Coronavirus Resource Center.

The center reported early Sunday that more than 8.6 billion doses of vaccines have been administered worldwide, a massive logistical campaign complicated by omicron’s surge.

Several countries are racing to accelerate vaccination campaigns as mounting evidence supports the need for booster doses to combat the variant.

Some information in this report came from Agence France-Presse, The Associated Press and Reuters.