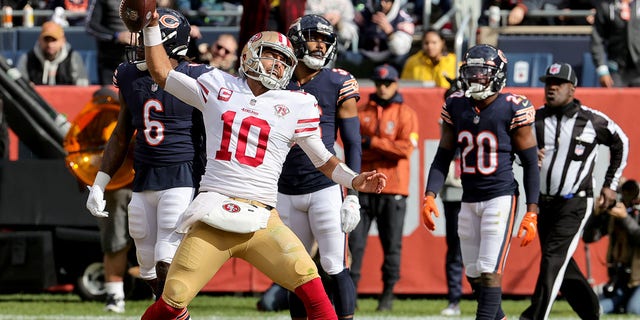 It was the week of backup quarterbacks.

Jets quarterback Mike White was called upon to fill in for the injured Zach Wilson, and Cowboys signal-caller replaced MVP candidate Dak Prescott, and both managed to come away with victories for their respective teams.

Here are the other QBs who dominated and led their teams to big wins in Week 8.

Matthew Stafford completed 21 of 32 passes for 305 yards and three touchdowns in a 38-22 win over the Texans. It was the fourth straight victory for the Rams, who will square off against the Titans on Sunday Night Football next.

Jimmy Garoppolo completed 17 of 28 passes for 322 yards and added two rushing touchdowns for the 49ers in their bounce-back 33-22 victory over the Bears. Garoppolo led three touchdown scores in the second half.

Next up for the 49ers is a date with the Cardinals.

Buffalo Bills quarterback Josh Allen (17) reacts after throwing a touchdown pass in the first half of an NFL football game against the Miami Dolphins, Sunday, Jan. 3, 2021, in Orchard Park, N.Y. (AP Photo/John Munson)

Josh Allen and the Bills bounced back against the Dolphins.

The Wyoming product completed 29 of 42 passes for 249 yards and two scores and added 55 yards and one more touchdown on the ground in a 26-11 win over their AFC East rivals.

The Bills will travel to Jacksonville to face the Jaguars next.

Cooper Rush filled in for Dak Prescott, who was a game-time decision and eventually ruled out before the team’s game against the Vikings on Sunday night.

Rush, who was making his first NFL start, completed 24 of 40 passes for 325 yards and two touchdowns in a Cowboys 20-16 win over Minnesota.

There’s a good chance Prescott will return next week against the Broncos, but if he doesn’t the Cowboys know that they have a solid backup option.

It was quite the performance for Mike White.

The Jets backup QB completed 37 of 45 passes for 405 yards and three touchdowns in New York’s improbable 34-31 win over the Bengals. White and Cam Newton are the only two quarterbacks since 1950 to throw for 400 or more yards in their first career start.

White became the first Jets signal-caller to throw for 400 or more yards since Vinny Testaverde did it back in 2000. And he also set an NFL record for the most completions in a quarterback’s first start.

It will be a quick turnaround for White, as the Jets take on the Colts on Thursday night.