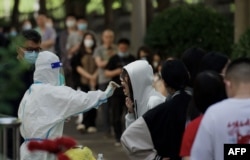 A Beijing man has landed thousands of his neighbors in quarantine after he ignored an order to stay at home and later tested positive for COVID-19, prompting a police investigation.

The Chinese capital has ordered hundreds of thousands of residents to stay home over the past five weeks to curb its largest coronavirus outbreak since the start of the pandemic.

Officials said Sunday that a man in his 40s surnamed Sun had failed to follow a requirement to isolate that he was given after visiting a shopping center considered high risk.

“During the home isolation period he … went out many times and walked in the neighborhood,” said Beijing public security official Pan Xuhong.

Sun and his wife later tested positive, prompting authorities to lock down 5,000 of their neighbors at home and send 250 to a government quarantine center.

It came as virus restrictions started easing in Beijing on Monday, with authorities reopening parks, museums and cinemas and declaring the outbreak under control.

China is wedded to a zero-COVID strategy of hard lockdowns, mass testing and long quarantine periods to wipe out clusters as they emerge.

There are tough penalties for breaking the rules, and Sun is now under police investigation.

Beijing’s omicron-fueled cluster has seen more than 1,700 infections since late April — a tiny number by global standards but troubling for China’s rigid approach to the virus.

Case numbers have dropped sharply in the past week.

“There have been no new cases found in society (outside quarantine centers) for two days,” Xu Hejian, a spokesman for the Beijing government, said Sunday. “The situation is stable and improving … but the risk of a rebound still exists.”

Most bus, subway and taxi services in three of the capital’s most populous districts were running again Monday, and millions were told to return to work.

A handful of tai chi practitioners and locals were enjoying balmy weather in a reopened downtown park.

“I think people are waiting to see whether there will be new cases before coming out in large numbers,” said Zhi Ruo, a government employee who had brought his 5-year-old child out to play.

China’s commercial hub of Shanghai also announced the lifting of more restrictions on Monday, nearly two months after economic activity ground to a halt in a hefty citywide lockdown.

The number of people kept at home has been gradually decreasing, and the municipal government said it would “not restrict the access of residents or villagers into and out of their communities for any reason” from June 1 — except in communities classified as high-risk or controlled areas.

Some 900,000 people across thousands of communities in the city are still in these brackets, according to the state-run China National Radio.

Public transport will also “resume basic operation” from Wednesday, authorities said, adding that taxis would be able to operate normally.

Private cars will be allowed to take to the road again in Shanghai — except for controlled areas — but will still not be allowed to leave or enter the city.

Shops remain closed, as well as most schools.

The city has been gradually easing restrictions over recent weeks, including allowing more residents out for a few hours at a time.

But some have complained of discrepancies between official announcements and relaxed rules being enforced on the ground.

Vice Mayor Wu Qing told reporters Sunday that the city would “eliminate unreasonable restrictions … and abandon the approval system for work and production by enterprises.”

Wu announced a slew of measures to shore up Shanghai’s virus-battered economy, including cutting property taxes, subsidizing gas and electricity for businesses, and ordering banks to lend more to small- and medium-size enterprises.

NEWYou can now listen to Fox News articles! Iran will conduct a rocket launch amid the reopening of negotiations over the nation's nuclear...
Read more

A deadly shooting at a WeatherTech facility in Illinois on Saturday occurred after a temporary employee robbed two other workers and was confronted, police...
Read more

“Who remembers where they were on a given night five months ago?” Figgers said.“I never asked anybody to believe what I was saying,” James...
Read more

NEWYou can now listen to Fox News articles! Iran will conduct a rocket launch amid the reopening of negotiations over the nation's nuclear...
Read more
Covid-19

A deadly shooting at a WeatherTech facility in Illinois on Saturday occurred after a temporary employee robbed two other workers and was confronted, police...
Read more
Emergency

“Who remembers where they were on a given night five months ago?” Figgers said.“I never asked anybody to believe what I was saying,” James...
Read more
Emergency

Trump is out of office. But the Supreme Court is ensuring his legacy lives on.