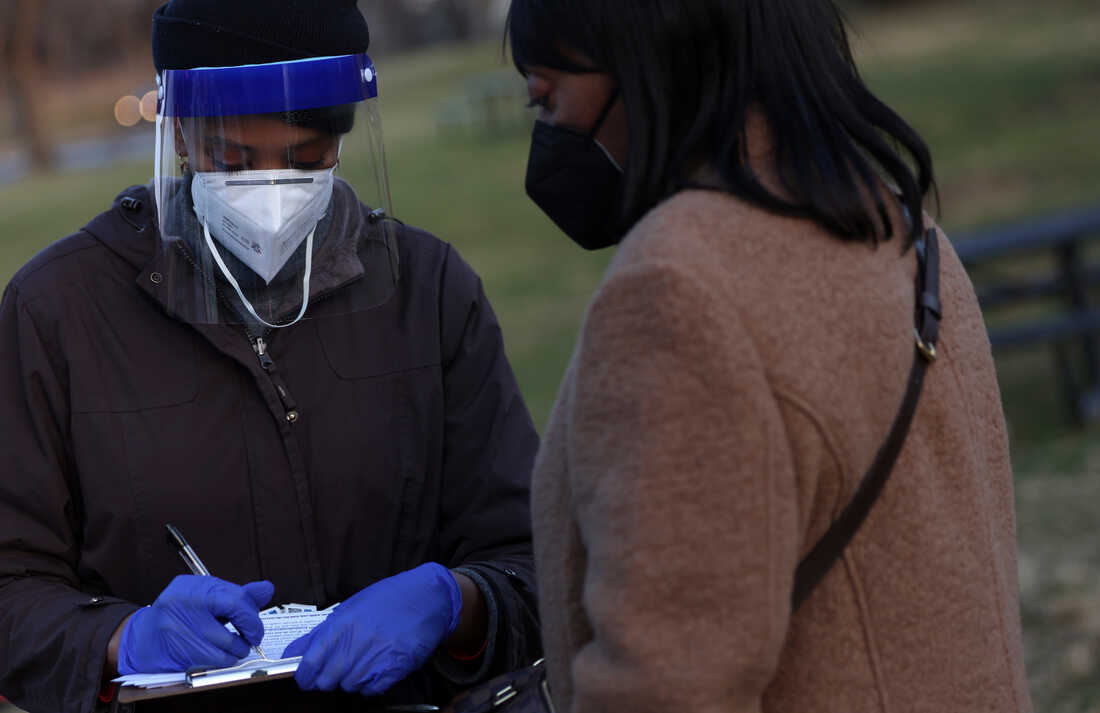 A line forms at a walk-up COVID-19 testing site last week at Farragut Square, just blocks from the White House.

Washington, D.C., is experiencing a major pandemic surge — making it the highest-risk place for COVID-19 infection in the nation.

D.C. experienced an average of 1,192 new cases per day over the past seven days, and 169 cases per 100,000 people as of Monday, according to data from the Center for Systems Science and Engineering at Johns Hopkins University.

Despite relatively high vaccination rates, D.C. is experiencing a surge because of several factors, according to Dr. Neil J. Sehgal, an assistant professor of health policy and management at the University of Maryland School of Public Health.

“I suspect what we are seeing in D.C. is the collision of increased opportunity for transmission due to the demographics of the District, a missed policy opportunity to prevent transmission, and the transmission dynamics of omicron — while vaccinated people are less likely to contract or transmit, with omicron, clearly both are happening,” he told NPR.

Demographically, the D.C. area skews younger than the rest of the country; about 50% of residents of the District are between the ages of 20 and 49.

“Before vaccines were available, we learned that transmission in the United States was largely driven by adults 20 to 49 years of age,” Sehgal said. “People age 20-49 are simply more transmission-efficient.”

That’s thanks to an increased likelihood of in-person work, a greater likelihood of household transmission due to raising young children and a greater chance of socializing outside the home, particularly during the holidays, he said.

What actions D.C. is taking

Like many places across the country, the hunt for an at-home COVID-19 test in the District meant long lines. The city started distributing free test kits to residents prior to the holidays as COVID-19 case numbers reached new highs, alongside offering on-site testing.

The testing program, which includes daily distribution of rapid test kits at public libraries, stands out against surrounding areas where tests can be harder to come by.

D.C. COVID-19 public testing sites are set to be closed on New Year’s Eve and New Year’s Day, but the city will still be distributing test kits at select locations.

An indoor mask mandate would have helped cut down on transmission before it got so bad, Sehgal said. But the city dropped the requirement in November (it had a mask and social distancing advisory in place instead).

Sehgal said he and other health experts called on Mayor Muriel Bowser to bring the mandate back when cases began rising in the District just after Thanksgiving.

“We know now that omicron was circulating alongside delta at that time, and the reluctance to keep reasonable, science-based precautions in place seeded the transmission that we are seeing today,” Sehgal said. “At that point we were on the ‘flat’ part of the exponential growth curve, but with every infected person passing the virus on to more than one other person on average, you can see how cases would continue to climb.”

Now, the city has again cracked down on requirements for masks and vaccines. On Dec. 21, the city brought the mask mandate back through at least Jan. 31. At the time, Bowser said that she did not regret having dropped the mandate earlier and that “as conditions warranted, we’ve changed our interventions, and we are changing them again.”

Starting Jan. 15, D.C. businesses — including restaurants, bars, gyms, and music venues and certain meeting spaces — will be required to ask patrons ages 12 and older for proof of vaccination to enter. When enforcement begins, patrons will only need to show proof of one shot to enter. By Feb. 15, two shots will be required for entry.

For the latest on the coronavirus in the D.C. area, follow member station WAMU’s coverage here.