Should You Be Worried About Flying? What We Know About Air Travel During the Shutdown 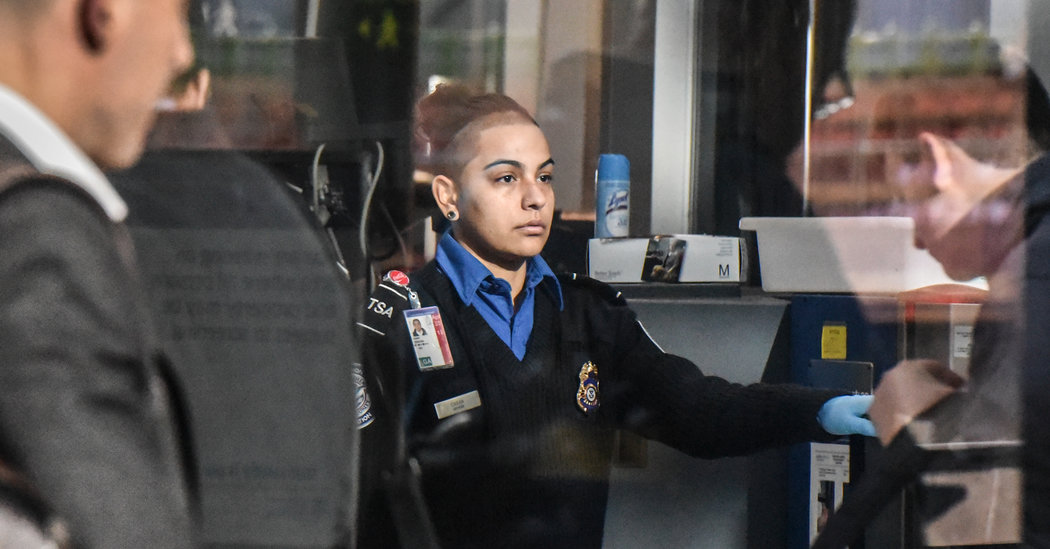 Aviation unions have raised concerns about the shutdown’s effect on the safety of the nation’s air travel system.

“In our risk averse industry,” their presidents said in a joint statement, “we cannot even calculate the level of risk currently at play, nor predict the point at which the entire system will break.”

The partial shutdown, nearing five full weeks, has caused strain across the air travel system. For more than a month, thousands of transportation security officers and air traffic controllers have been working without pay. Union officials have been warning that the additional stress the shutdown has put on the workers could have dangerous consequences.

“We are less safe today,” Sara Nelson, the international president of the Association of Flight Attendants-CWA, said on Thursday.

The nature of the concern being expressed by aviation union leaders is more general than specific. In effect, they are warning that the complex system intended to keep air travelers safe is being seriously tested by the shutdown and its consequences, from staffing changes to the financial stress it has inflicted on workers who do not know how long they will have to survive without a paycheck.

Still, the Federal Aviation Administration insisted on Thursday that “the traveling public can be assured that our nation’s airspace system is safe.”

“The F.A.A. continually reviews and analyzes the performance of the national airspace system to assess its safety and efficiency,” the agency said in a statement. “We have not observed any appreciable difference in performance over the last several weeks compared to the same periods during the previous two years.”

Who’s working and who’s at home?

Air traffic controllers, who are responsible for keeping planes from colliding, have been working without pay.

It’s more complicated for safety inspectors, who are responsible for oversight of commercial aircraft, pilots and maintenance facilities.

Last week, the F.A.A. announced it was bringing back furloughed inspectors and other employees in order to ensure safety. Its revised shutdown plan called for having 3,113 employees responsible for aviation safety designated as essential to protect life and safety, meaning that they would work without pay during the shutdown rather than be furloughed.

The F.A.A.’s original shutdown plan called for only 216 aviation safety positions to be considered essential for life and safety. The union representing inspectors had warned that furloughing those workers was hurting the safety of the air travel system.

There are still plenty of F.A.A. employees who have been sidelined. Over all, about 14,000 of the F.A.A.’s 45,000 employees are furloughed under the revised shutdown plan.

What about airport security?

More than 40,000 transportation security officers — employees of the Department of Homeland Security who screen passengers at the airports — have worked through the shutdown. But they have been failing to show up for their shifts at a rising rate — about one in 10 were absent on Sunday. On average, they make less than $40,000 a year and many of them have had to borrow money, seek side jobs or turn to food pantries to get by.

Despite reassurances from Transportation Security Administration officials, the agency did have a lapse in early January that frightened travelers. A woman passed through a screening checkpoint at Hartsfield-Jackson Atlanta International Airport with a gun that she carried onto a flight that landed Jan. 3 in Tokyo.

The agency later said that any perception that the shutdown caused the failure to detect the gun, which was in a carry-on bag, “would be false.” No similar lapses have been reported during the shutdown.

Why are air traffic controllers so worried?

Staffing was already an issue even before the shutdown, their union said.

The number of certified controllers is at a 30-year low, according to the National Air Traffic Controllers Association. The centralized radar facility for the airports that serve New York City, which is known as a Tracon, has only about 130 controllers, far short of its full complement of 228, said Rich Santa, a regional vice president of the controllers’ union. And 50 of them are eligible to retire now, he said.

Many of the controllers were already working the maximum of 60 hours per week — 10-hour shifts, six days in a row — before the shutdown, said Mick Devine, a Boston-based regional vice president of the controllers’ union. Having received their second biweekly statements showing pay of $0.00 on Thursday, the controllers are worrying about how they will pay their mortgages and school loans when they “need to be 100 percent focused 100 percent of the time,” Mr. Devine said.

Paul M. Rinaldi, the president of the union, said he was “starting to see routine mistakes in clearances being made because controllers are distracted.”

Citing the large number of controllers who can retire, he asked how long they would continue to work without pay “before they just fill out their retirement paperwork and then go wait tables or drive Uber or Lyft so that they could put food on the table.”

The shutdown has also caused the F.A.A.’s training academy in Oklahoma City to close, prompting concerns about disruptions to the pipeline of new controllers.

A 2017 report from the Transportation Department’s inspector general found that the F.A.A. had fallen well short of its hiring goals for air traffic controllers from 2013 through 2015. The report concluded that the agency would “continue to face challenges in meeting its hiring goals and ensuring it hires and trains enough new controllers to offset retirements.”

So far, according to the F.A.A., the shutdown has not driven air traffic controllers to quit.

The F.A.A. said it has seen “no measurable increase” in unplanned retirements or resignations by air traffic controllers.

How are workers coping?

Many transportation security officers have been accepting handouts from food pantries and free meals from airport concessions. Some said they had resorted to selling possessions on eBay or seeking out odd jobs like delivering food. Mr. Devine said controllers are barred from side jobs that could be considered a conflict of interest. To avoid running afoul of the rules, he said, they are taking low-skill, low-pay gigs, such as driving for ride-sharing services or tending bar.

“Some people just hop in their cars as they’re leaving the airport and head to the Uber stand and pick someone up on their way home,” Mr. Devine said, describing how some controllers are earning money on the side.

So should I be afraid to get on a plane?

At a news conference on Thursday, Mr. Rinaldi, the president of the controllers’ union, was asked directly if the flying public was safe.

He answered, “The flying public is safe.”

Air traffic controllers, he said, “are going to make sure that you get from Point A to Point B safely.” But he could not promise that travelers would be on time or would make their connections, and he expressed concern about how the departure of controllers would affect flights.

“We cannot hold this schedule when we lose that many controllers,” he said, “and we’re about to lose a lot of controllers.”