Sarah Sanders upfront about ‘nationalizing’ Arkansas governor’s race: ‘You bet I am’ 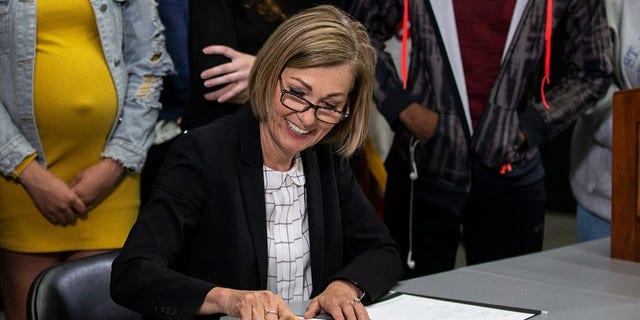 CABOT, Ark. — She’s toured the state in an RV emblazoned with her name, launched a TV ad that’s airing during Arkansas Razorbacks football games and spoken to packed rooms at restaurants. Former White House press secretary Sarah Sanders’ introduction as a candidate for governor hasn’t strayed from most campaigns here.

Except for the crowds, which are far beyond what people have seen in this mostly rural place. And the campaign talk, which often isn’t about the state.

“As I travel around the state, I keep hearing this criticism, ‘Oh, there’s that Sarah Sanders, nationalizing the race,'” Sanders told hundreds of people packed at a Colton’s Steak House in Cabot, a half-hour drive from the state capital of Little Rock. “And my answer to those people is, ‘You bet I am.’ Because if you’re not paying attention to what is happening in this country, you’re missing what is going on.”

“If you’re not paying attention to what is happening in this country, you’re missing what is going on.”

Sanders’ celebrity as former President Donald Trump’s spokesperson granted her immediate front-runner status in one of the nation’s most Trump-friendly states. It’s also transforming politics in a place where voters in state races are used to hearing overwhelmingly about Arkansas taxes, Arkansas roads and Arkansas schools.

This is hardly the only state where local politics isn’t local anymore. Republican candidates for governor elsewhere also are focused more on President Joe Biden than their own opponents and on federal, rather than state, issues. And many Democrats would rather talk about Trump than about their rivals.

“Her approach suggests she understands the contemporary electorate in Arkansas and everywhere,” said Janine Parry, a political science professor at the University of Arkansas. Politics, Parry said, “is in a period of profound nationalization.”

“Her approach suggests she understands the contemporary electorate in Arkansas and everywhere.”

— Janine Parry, political science professor at the University of Arkansas

It’s a sharp contrast with past races for governor in Arkansas, where Republican Gov. Asa Hutchinson campaigned on requiring computer science education in schools. His predecessor, Democratic Gov. Mike Beebe, ran on phasing out the sales tax on groceries.

Sanders, 39, announced her bid in January with a promise to fight the “radical left,” something that’s awfully hard to find in solidly red Arkansas. On Twitter and elsewhere, she rails against Biden on his coronavirus pandemic response, immigration and the withdrawal from Afghanistan.

“Sarah Sanders is not running for governor of Arkansas. She is running on a national stage,” said Michael John Gray, a former chair of the state Democratic Party, who’s now heading an independent committee focused primarily on defeating Sanders’ bid.

Sanders’ approach reflects just how polarized the country has become in recent years. Invoking unpopular national Democratic figures is seen as the best voter-motivating tactic, even in local races.

In Iowa, Republican Gov. Kim Reynolds, who is expected to run for reelection, is criticizing Biden on numerous issues including federal spending.

In Oklahoma, Republican Gov. Kevin Stitt, who faces reelection next year, has had little to say about his state’s battle with COVID-19 — which hit the grim milestone of 10,000 deaths this week — but issued a slick video on Biden’s Afghanistan performance.

Some Democrats are also leaning national. California Gov. Gavin Newsom defeated a recall attempt earlier this month with a campaign that railed against “Trumpism.” New Jersey Gov. Phil Murphy is campaigning on abortion rights and gun control, and at a recent rally, he criticized states like Florida and Texas for their right-wing policies.

When Sanders does talk about Arkansas, she does so only in broad strokes. She says she’s tired of the state being at the bottom of many rankings. She said she wants to eliminate the state’s income tax, though she offers no hints on how. She also mentions doing something on education and workforce training, which she said hasn’t changed substantially since her father, Mike Huckabee, was governor from 1996 to 2007.

“We have to stop just trying to push kids through the system and actually focus on how are we preparing them to go into the workforce,” she told The Associated Press.

Though best known for her White House briefings, during which she sparred with reporters and faced questions about her truthfulness, Sanders is no stranger to the state’s politics. She appeared in TV ads for her dad’s campaigns in the 1990s and early 2000s and chaired Arkansas Sen. John Boozman’s campaign.

She’s mostly steered clear of referring to the current governor, Hutchinson, whom Trump has branded as a RINO, or Republican in Name Only, after he vetoed an anti-transgender bill. Hutchinson is barred by the state’s term limits from running for governor again.

Her first TV ad features footage of her dad and former President Bill Clinton as they marked the 40th anniversary of Little Rock Central High School’s desegregation. It quickly pivots to a favorite target, claiming that the “radical left wants to teach our kids America is a racist and evil country.”

“[The] radical left wants to teach our kids America is a racist and evil country.”

Sanders embarked on a statewide tour this month that included a rally with country singer John Rich that drew 1,000 people and a parade on Lake Ouachita that her campaign said included more than 1,500 boats.

At her stop in Cabot — a city of about 25,000 — Sanders got the loudest applause when she talked about Trump.

“I’m proud of the fact I worked with a president who did exactly what he said he was going to do,” she said.

Sanders’ only rival in the Republican primary, Attorney General Leslie Rutledge, has lagged far behind in fundraising. Sanders in July reported raising $9 million since she announced her candidacy, with the majority of the money coming from out of state.

“While my opponent talks about the liberal left in Washington, D.C., she has done nothing to effectively combat them in the last several years,” Rutledge told the AP.

Democrats, who face an uphill climb, are trying to highlight Sanders’ White House stint as a sign she can’t bring people together.

But in Arkansas, where Trump won with more than 62% of the vote, her hyperpartisan past is an asset to many. In Cabot, some in the mostly unmasked audience donned red Trump hats and shirts depicting the former president.

“Everything she stands for is just maintaining the American way, the conservative way of life, keeping our rights alive,” said Kristen Harrington, who works at a honey company in Cabot and who wore a shirt that read “Mean Tweets 2024.”

Harold Glenn Earnest, a 96-year-old veteran from tiny Romance, about 30 miles north of Cabot, whom Sanders talked with at the eatery, said he’s already thinking beyond the governor’s mansion for Sanders.

“She’ll be the governor. There’s no question about that,” Earnest said. “I want to see her run for president.”