Policies past their sell-by-date: how can we make urban transport more inclusive? 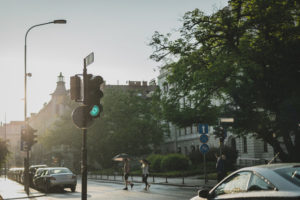 Kyle Rowe, SVP of partnerships and policy at Spin, an electric bicycle-sharing and electric scooter-sharing company based in San Francisco, looks at the decriminalization of jaywalking for safer and more equitable transportation

Why is jaywalking even a thing?

Terms like jaywalking were coined over a century ago and we’ve become so accustomed to arcane pedestrian policies that we rarely pause to reflect on their efficacy. While in some countries, including in the UK, jaywalking is generally not an offense, in many states in the US crossing the street illegally is against the law.

When we re-examine these laws, we find that they often not only fail to improve safety but have led to disproportionate policing against people of color. Many rules surrounding where people can walk or ride bicycles have proven to be ineffective and in many communities, harmful. Especially in underprivileged neighborhoods with poor infrastructure like missing sidewalks, it’s not always possible, or even safe, for people to observe those laws.

These laws do not have to be the status quo. We have an opportunity to make city streets safer for bicyclists, pedestrians, and motorists but rather than criminalizing these acts, we should first consider removing laws that would unfairly target these behaviors and push to improve infrastructure instead.

Despite the growing number of bicycle and scooter programs entering the ring in major cities, our traffic laws still cater to a more car-dominant transportation system. It’s promising that we are beginning to see the emergence of bike lanes and expanded sidewalks, but road redesigns are too often focused on wealthier neighborhoods.

In August, the National Association of City Transportation Officials (NACTO) released a study showing that in the US, black pedestrians were twice as likely to be killed while walking as white pedestrians between 2015 and 2019. In that same period, the fatality rate for black bicyclists was 25% higher than it was for white bike riders.

It’s not you. It’s me, the infrastructure.

The report cites infrastructure, not minor walking and biking laws, as driving the disproportionate number of fatalities amongst black bicyclists and pedestrians. The bike lanes and sidewalks that are protecting people walking and or using bikes and scooters in predominantly white communities have not yet extended toward more diverse communities. Their absence has become a danger to everyone on the road.

When cities revise their approach to transportation safety and move away from laws that foster racial bias, they can shift their focus to building safer, more equitable infrastructure. We’ve already begun to see that in Seattle, where advocates were able to convince lawmakers to repeal the city’s all-ages helmet laws by presenting studies that showed the laws did not improve cyclist safety but were used to target unhoused residents and other underprivileged groups.

There are factors standing in the way of this progress. The issues with pedestrian and bicycle traffic laws aren’t always a controversial issue that will get a city official elected, and even when attention is finally drawn to the problem, elected officials are tasked with making complex policy decisions on transportation infrastructure without advisory experts.

In 2008, the League of American Bicyclists ranked Kansas City, Missouri, as the least bike-friendly city in the country. The city was so notoriously bad for bicyclists that the BBC produced a documentary to gasp at the failings of this American city’s infrastructure. The negative – and even international – press coverage was a wake-up call for the embarrassed city officials, leading to Mayor Mark Funkhouser vowing in 2008 to make the city one of the best places to cycle in the US by 2020.

Last year, Kansas City became one of the first major US cities to remove laws against minor walking and biking infractions. The change was primarily driven by advocacy and support from the non-profit BikeWalkKC and Safe Routes Partnership and as a result, the city was able to create more accessible and equitable spaces to walk, bicycle, and live. BikeWalkKC’s step-by-step guide on how to drive such change is available for free online for other communities and cities to tap into. NACTO’s latest report showcases the process and progress of the new initiative that could serve as a guide to what other cities can start implementing.

A key element to getting started is assessing the benefits, if any, of the current laws in place. Before city council members eliminate an outdated law, they should consider whether the statute can be enforced in an equitable manner. There’s also the question of whether the law’s enforcement could be conducted without a police officer. City officials also need to assess how safety would be impacted if the law was removed entirely. Ultimately, we need to know whether the statute is effective at making transportation safer or if is it simply creating opportunities for more racial bias.

A more inclusive and safer city

Kansas City was able to identify and remove the walking and biking statutes that were disproportionately enforced on marginalized people, the result of which has led to fewer infractions and a redirected focus on safer infrastructure. NACTO’s report includes this among several case studies that can help politicians and advocates get involved with improving their own city policies.

Removing laws against minor walking and biking infractions not only helps reduce the targeting and over-policing of marginalized communities, but it also gives cities a chance to redirect their attention to improving transportation infrastructure. Our municipalities shouldn’t wait until they land on an embarrassing list for transportation failures.

Drivers are already sharing the road with cyclists, scooter riders, and pedestrians. More than ever they all require safe and accessible infrastructure. We can protect people’s safety by addressing the shortcomings of current road space, including sidewalks, and that starts with eliminating the laws that no longer serve the people.