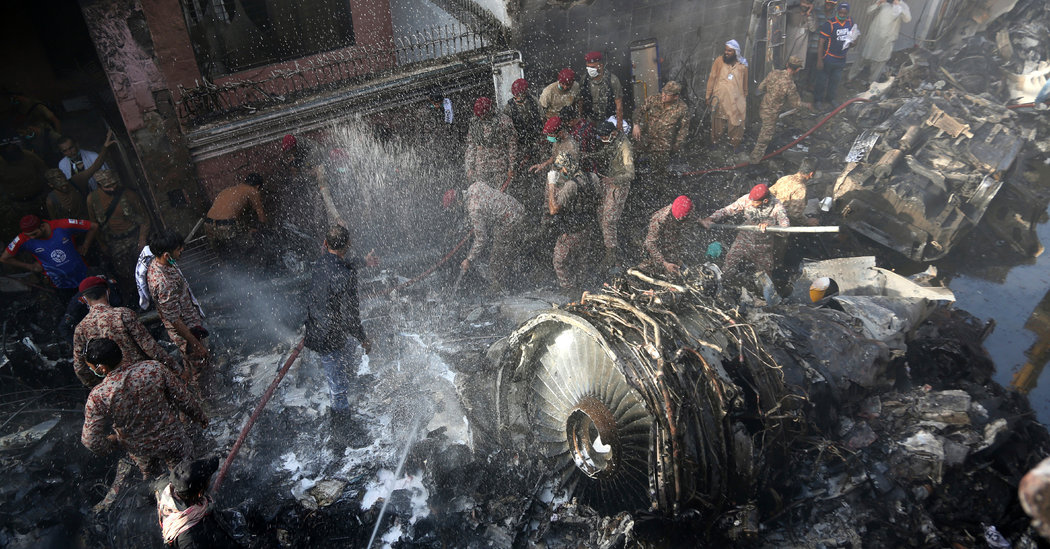 The pilots ignored repeated warnings that they were flying too high approaching Karachi’s airport, and failed to lower the landing gear, according to a preliminary report.

The pilots of a Pakistani airliner that crashed last month in Karachi were busy talking about the coronavirus and repeatedly ignored directions from air traffic controllers before their plane went down, killing 98 people, Pakistan’s aviation minister said Wednesday.

The Pakistan International Airlines pilots also ignored automated warnings in the cockpit and failed to lower the landing gear, causing the plane’s engines to hit the runway, according to a preliminary report on the crash.

The aviation minister, Ghulam Sarwar Khan, said air traffic controllers warned three times that the plane was flying too high on its approach to the runway at Karachi’s airport and directed it not to land.

“But the pilot ignored these warnings,” he said.

The plane was carrying military officers, executives and bankers on a flight from the eastern city of Lahore to Karachi on May 22 when it crashed into a residential area. Many passengers were headed to the port city to reunite with family members for the Eid al-Fitr holiday after being in lockdown for two months.

Of the 99 people on board, only 2 passengers survived. Four others on the ground were injured and one subsequently died.

Mr. Khan said the pilot, Captain Sajjad Gul, was very experienced and there were no technical faults with the aircraft reported by the pilots during the flight.

“The pilots were discussing corona throughout the flight,” Mr. Khan said. “They were not focused.”

“When the control tower told the pilot about the plane’s dangerous height, the pilot said ‘I’ll manage’ and the pilots started discussing coronavirus again,” the minister added during a hearing at the National Assembly in Islamabad, the capital. “There was overconfidence.”

Like many developing countries, Pakistan is struggling to contain the coronavirus pandemic. The number of deaths and infections have spiked in recent weeks. The country has 188,926 officially confirmed cases — but the real number is thought to be much higher — and 3,755 people have lost their lives to the virus.

The crash brought into focus the dismal state of affairs of Pakistan International Airlines, the national carrier, and after the crash, Prime Minister Imran Khan demanded an immediate inquiry.

The airline has experienced huge financial losses in recent decades. Corruption, nepotism, overstaffing, lack of quality control and favoritism in making appointments due to political pressures have plagued the airline, and attempts by successive governments to turn it into a profit-making entity have failed.

Adding to these troubles is the airline’s history of air disasters. The deadliest was in 2010, when an Airbus flying from Karachi crashed into a hill, killing all 152 onboard. In 2016, a Pakistan International Airlines plane burst into flames after one of its two turboprop engines failed, killing 48 people.

The aviation minister presented an alarming statistic about Pakistani aviation, saying that 40 percent of the pilots in the country were flying with fake licenses.

On Thursday Pakistan International Airlines said it was grounding 150 pilots because of questions about their credentials to fly.

“It’s a tough decision that will impact our commercial interests, but safety takes precedence over everything else,” said Abdullah Khan, the spokesman for the airline.

According to a preliminary government report on the May 22 crash, air traffic controllers warned the pilots about the plane’s “excessive height” as it prepared to land, “but landing approach was not discontinued.”

The landing gear was not down at the time of the attempted landing, the report said.

“The aircraft touched the runway surface on its engines,” it said. “Flight crew applied reverse engine power and initiated a braking action. Both engines scrubbed the runway at various locations, causing damage to both of them.”

The pilot pulled the airliner back up into the air to execute a “go-around.” But irreparable damage had already been done to both engines, causing them to fail. The plane was unable to stay aloft and crashed into a residential neighborhood, bursting into a huge fireball.

The crash damaged 29 houses, and the government will compensate the residents for their losses, the minister said.