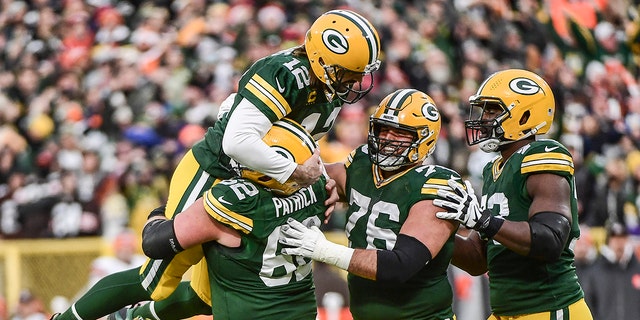 Rodgers surpassed Brett Favre to become Green Bay’s all-time leader in touchdown passes, and the Packers intercepted Baker Mayfield four times in a 24-22 victory over the Cleveland Browns on Saturday. Cleveland nearly came all the way back from a 12-point second-half deficit before Douglas’ second interception of the day sealed the game with 43 seconds left.

“We’ve got to do a better job of closing games out,” Rodgers said. “Our defense has closed out a lot of games, the last two weeks stopping that 2-point conversion (in a 31-30 victory at Baltimore) and Rasul coming up with that big pick. It’s nerve racking, but winning is difficult in this league.”

Rodgers went 24 of 34 for 202 yards with three touchdown passes to increase his career total to 445. Favre threw 508 touchdown passes during his Hall of Fame career, 442 of them with Green Bay.

But it was Green Bay’s defense that clinched this victory by sacking Mayfield five times and forcing him into his first career four-interception performance. All three touchdowns by the Packers (12-3) came after Mayfield interceptions.

“It was just missed throws,” Mayfield said. “Uncharacteristic, and I hurt this team. That’s the most frustrating thing for me, because I thought our defense played tremendous against a really, really good offense. But when you turn the ball over on your own territory, in the red zone and around midfield and give them extra opportunities, they’re going to take advantage of it.”

Mayfield was 21 of 36 for 222 yards with two touchdowns as well as those four picks in his return from the reserve/COVID-19 list, which caused him to miss a 16-14 loss to the Las Vegas Raiders on Monday.

Nick Chubb ran for 126 yards and a touchdown to lead the Browns’ 219-yard rushing effort that kept them in the game.

The Browns (7-8) trailed 24-22 and had third-and-10 at the 50 when Douglas picked off Mayfield’s pass intended for Donovan Peoples-Jones at the 40.

Since getting signed off the Arizona Cardinals’ practice squad in early October, Douglas has a team-high five interceptions. He had a game-clinching interception in the final minute of a victory at Arizona earlier this season.

“Coaches told me as long as I keep catching them, they’ll keep coming,” Douglas said. “I’m just trying to catch them when they come.”

Green Bay Packers quarterback Aaron Rodgers (12) is lifted up by guard Lucas Patrick (62) after setting the franchise record for most passing TDs in the first quarter during the game against the Cleveland Browns at Lambeau Field.
(Benny Sieu-USA Today Sports)

Darnell Savage and Chandon Sullivan also had interceptions. Rashan Gary had two of the Packers’ five sacks against the Browns, whose offensive line was decimated with left tackle Jedrick Wills and center JC Tretter both on the COVID-19 list.

Until the Browns produced their second-half threat, the day belonged to Rodgers, who broke Favre’s record by throwing an 11-yard TD pass to Allen Lazard in the first quarter.

“Aaron breaks so many records,” Lazard said. “Literally every week it’s almost like I get on Instagram Monday morning and someone’s always posting some new record that Aaron’s breaking. For us, in a sense, it’s another day at the office. Obviously this one’s a bigger milestone in that sense.”

“Aaron breaks so many records. Literally every week it’s almost like I get on Instagram Monday morning and someone’s always posting some new record that Aaron’s breaking.”

Rodgers spent his first three NFL seasons backing up Favre before taking over in 2008. Favre sent a message to Rodgers in a video that aired on the Lambeau Field scoreboard after the record-breaking touchdown pass.

“Hey, 12, congratulations, man, on passing my touchdown record,” Favre said. “I have one request. Go get us another Super Bowl. Congrats.”

“Definitely got me a little teary-eyed on the bench,” said Rodgers, who saluted the Lambeau Field crowd that gave him a hearty ovation. “A moment I’ll never forget, for sure. I’m thankful for Favre’s message, for the response from the guys and the crowd obviously was really special.”

Rodgers later threw two touchdown passes to Davante Adams, who had 10 catches for 114 yards. Adams has caught at least 10 passes for 100 yards and two touchdowns in eight career games, the most of anyone in NFL history.

Green Bay Packers quarterback Aaron Rodgers (12) celebrates with wide receiver Allen Lazard (13) after setting the franchise record for most passing TDs in the first quarter during the game against the Cleveland Browns at Lambeau Field.
(Benny Sieu-USA Today Sports)

“When you start stacking up the numbers for Davante, it’s mind blowing,” Rodgers said. “I really feel like he’s the best player that I’ve played with.”

The Packers already have clinched the NFC North title and are seeking the conference’s top playoff seed as they chase their first Super Bowl berth since their 2010 championship season. They have lost in the NFC championship game each of the last two seasons.

Rodgers went to the locker room late in the first half after aggravating his toe injury but didn’t miss a down. Rodgers has been playing with a fractured left pinky toe. … Packers DL Tyler Lancaster left in the fourth quarter.

Packers: host the Minnesota Vikings on Jan. 2 in their regular-season home finale.

With the U.S. workforce slowly undergoing a change from baby boomers to a labor pool full of Generation Z workers, attracting and retaining candidates...
Read more

Falling from a height due to the absence of a proper harness is one of the major causes of injury in the workplace, and...
Read more

Beat the Heat on the Jobsite – How to Stay Cool at the Construction Site?

The summer is upon us, and as we all know working long hours at the construction site is going to be an enduring test....
Read more

How to Use a Fire Extinguisher

Proper use of fire extinguishers helps prevent loss of lives and property, especially in areas prone to fire-related accidents. Homes, offices, factories, and other...
Read more

Falling from a height due to the absence of a proper harness is one of the major causes of injury in the workplace, and...
Read more
SAFETY PRODUCTS

Beat the Heat on the Jobsite – How to Stay Cool at the Construction Site?

The summer is upon us, and as we all know working long hours at the construction site is going to be an enduring test....
Read more
Feature news

How to Use a Fire Extinguisher