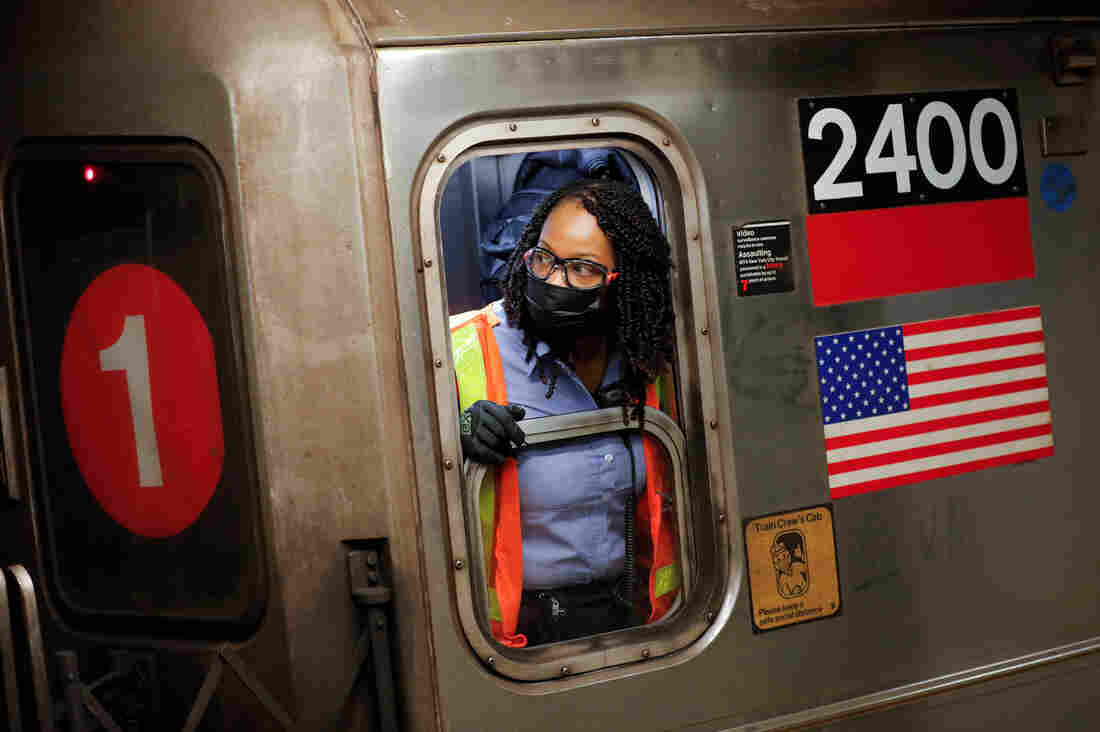 New York City Mayor Bill de Blasio said Monday that city workers will be required to be vaccinated or get tested weekly for COVID-19. De Blasio is seen here in Brooklyn on Sunday at a rally in support of Haiti.

Across the country, officials are rolling out new requirements for mandatory vaccines for public employees — and the possibility of penalties if they fail to comply — as cases of the delta variant of the coronavirus rise sharply and vaccination rates stall.

The mayor of Los Angeles said Tuesday that city employees would be required to be vaccinated. Eric Garcetti noted that some employees had been asking for enhanced protection.

The announcement follows a succession of similar ones on Monday. In New York City, Mayor Bill de Blasio announced all city workers would have to either get vaccinated or tested weekly for the virus. In California, Gov. Gavin Newsom declared a similar policy for state employees and health care workers.

At the federal level, Secretary of Veterans Affairs Denis McDonough said the department will require front-line health care workers to get vaccinated in the next two months. It will be the first government agency to set such a mandate.

And a range of medical groups representing millions of doctors, nurses, pharmacists and other health workers released a statement calling for all health care and long-term care employers to require their employees to be vaccinated against COVID-19.

Vaccination or weekly testing will be required

De Blasio cited the danger and lethality of the rapidly spreading delta variant in announcing the new mandate, which will apply to roughly 340,000 city workers, including teachers and police officers. The policy takes effect in mid-August for people who work in foster care, shelters or senior centers and in September for the remaining city workforce.

Renee Campion, commissioner at the New York City Office of Labor Relations, said if employees refuse to comply, they will be put on leave without pay.

“We’re leading by example,” de Blasio said, noting that he hopes the city’s stance will push private employers to follow. “Right now there are employers ready to act, who will take heart from our announcement.”

In New York City, some 71% of adults have had at least one dose of a COVID-19 vaccine. Information on the vaccination rate among city workers is incomplete, but it is thought to be similar to the overall rate for adults.

Part of the goal of the new mandate is to “lift all boats” by creating a higher standard, said New York City Health Commissioner Dave Chokshi.

An MTA worker wears a protective mask while working on a subway train in New York City on Monday as coronavirus cases continue to rise, fueled by the virus’s delta variant.

City workers who are unvaccinated must wear a mask when indoors at work, de Blasio reiterated, adding that workers who don’t will be removed from the workforce.

The city’s largest teachers union, the United Federation of Teachers, released a statement in support of the new policy, saying vaccination and testing “helped keep schools among the safest places in the city.”

“This approach puts the emphasis on vaccination but still allows for personal choice and provides additional safeguards through regular testing,” the union said.

FDNY EMS Local 2507, which says it represents over 3,000 EMTs, paramedics and fire inspectors, says it is strongly opposed to the new rules.

“The city and the mayor cannot simply disregard the civil liberties of the workforce. The United States FDA has YET to give final approvals of the Covid-19 vaccinations and that remains troubling for some,” Local 2507 president Oren Barzilay said in a statement.

Campion, the city labor official, said that under the New York City collective bargaining law, the city does have to negotiate with unions regarding the safety impacts of these policies.

The city is in talks with various unions, De Blasio said, but added that it has the right as an employer to take urgent actions to protect the health and safety of workers in the middle of a global pandemic.

“It’s quite clear the delta variant has changed the game. Now it’s time to focus on one thing and one thing only — vaccination. No more excuses, no more delays,” de Blasio said. “Our goal here is simple: make it maximally easy for people to get vaccinated and create an atmosphere where there’s clearly consequences if you don’t get vaccinated. Because vaccination is the only answer at this point.”

A few hours after de Blasio’s news, Gov. Newsom said California would make a similar move: Beginning in August, state employees and health care workers will be required to provide proof of vaccination, or get tested regularly.

“As the state’s largest employer — we’re leading by example. Vaccines are the solution. We encourage local governments and other businesses to follow suit,” Newsom tweeted.

Using a phrase that has become common, Newsom wrote: “We’re experiencing a pandemic of the unvaccinated. Everyone that can get vaccinated—should.”

VA workers have eight weeks to get vaccinated

The VA’s mandate will apply to the roughly 115,000 employees with the closest contact with patients, such as doctors, dentists, optometrists, registered nurses, physician assistants and others. Staff members will have eight weeks to get fully vaccinated.

“I am doing this because it’s the best way to keep our veterans safe, full stop,” McDonough, the VA secretary, told The New York Times.

The VA said four employees have died due to COVID-19 in recent weeks, all of whom were unvaccinated. There have also been three outbreaks among unvaccinated employees at VA facilities.

More than 50 medical groups, including the American Medical Association and the American Nurses Association, signed a statement calling for all health care and long-term care employers to require vaccinations for their employees.

“Vaccination is the primary way to put the pandemic behind us and avoid the return of stringent public health measures,” they wrote.

They noted vaccination is important not only for health care workers’ own health, but also for that of colleagues, families, residents of long-term care facilities and patients — particularly unvaccinated children and the immunocompromised who are vulnerable to COVID-19.

“As the health care community leads the way in requiring vaccines for our employees, we hope all other employers across the country will follow our lead and implement effective policies to encourage vaccination. The health and safety of U.S. workers, families, communities, and the nation depends on it.”

Some employers have already introduced vaccination mandates for employees.

A federal judge threw out the employees’ lawsuit, saying the requirement broke no federal law. “Methodist is trying to do their business of saving lives without giving them the COVID-19 virus. It is a choice made to keep staff, patients, and their families safer,” wrote U.S. District Judge Lynn Hughes.

After that, more than 150 employees at the hospital system who refused to get vaccinated either resigned or were fired.

The U.S. Equal Employment Opportunity Commission has issued guidance stating that employers have the legal right to require COVID-19 vaccination for all employees physically entering the workplace. In some circumstances, employers must provide reasonable accommodations for those with disabilities or religious objections.

Many long-term care operators have begun mandating that their workers get immunized to keep their jobs, and several universities have also mandated that staff get a COVID-19 vaccine.

Other employers are sticking with incentives to try to get employees vaccinated.

Meanwhile, according to the National Academy for State Health Policy, governors in five states have signed legislation barring businesses from requiring COVID-19 vaccinations as a condition of work.