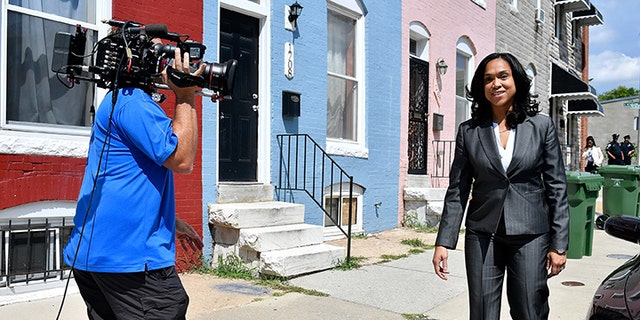 Earlier last month a grand jury indicted her on two counts of perjury and making false statements on a loan application to purchase the vacation homes. She also allegedly failed to disclose past unpaid federal taxes on the mortgage applications. She pleaded not guilty to all four counts, FOX 45 of Baltimore reported.

Mosby, 42, has refused to resign and has claimed the charges are politically motivated.

“This is a politically charged case,” her defense attorney A. Scott Bolden said, adding that Mosby wants her trial to start within two months. “My client is in the middle of a re-election campaign. The government has decided to bring an indictment against her four or five months out.”

Mosby allegedly claimed she had suffered financially because of the coronavirus on an application in order to take $90,000 from her retirement account and ultimately withdrew $81,000, according to FOX 45. In 2020, Mosby’s salary was about $247,000 and was never reduced because of the pandemic, according to the indictment.

Baltimore State’s Attorney Marilyn Mosby addresses the media outside her office on a day after her indictment on federal perjury charges on Friday, Jan. 14, 2022.
(Associated Press)

U.S. Magistrate Judge J. Mark Coulson, who presided over Friday’s hearing, told Bolden he will have to take up his request for a trial date with U.S. District Judge Lydia Kay Griggsby. A conference call between Griggby and the lawyers is scheduled for Feb. 23.

She first came to national prominence in 2015 as a prosecutor on the Freddie Gray case, a Black man who died in police custody. Mosby brought charges against six police officers but all six were ultimately acquitted or had charges against them dropped.

Mosby maintains her innocence. “I wanted the people of Baltimore to hear it from me: I’ve done nothing wrong. I did not defraud anyone to take money from my retirement savings,” she said in January.