TfL has revealed that it has begun to search for a new sponsor for London’s iconic cable car. More than 13 million journeys have been made on the Emirates Air Line since it launched in the summer of 2012.

Since opening, the fully accessible, unique experience has established itself as one of London’s favourite leisure attractions. The cable car regularly sees 40,000 passengers a week during the summer months.

This summer has been one of the most popular for the cable car since opening, with figures reaching more than 60,000 journeys a week. The recent August Bank Holiday weekend was the most popular since 2012 with 28,000 journeys, and the week in total also had the highest number of customer journeys in eight years.

The cable car, which opened as part of TfL’s preparations for the London 2012 Olympic and Paralympic Games, crosses the River Thames. The landmark feature has complemented major regeneration in both the Royal Docks and the Greenwich Peninsula. By providing a new, spectacular way to cross the river, it has helped encourage new shops, experiences and homes to be built on both sides of the Thames.

TfL’s initial 10-year deal for the sponsored naming rights for the cable car will end in June 2022 and TfL has now begun the process of seeking a new commercial partner who shares the ambition to build on this success and cement the cable car’s position as one of the best things to do in London.

The new deal will be for a minimum of three years and would provide the new partner with a unique opportunity to rename London’s cable car in collaboration with TfL. This would help to promote their brand to a massive public audience in London as well as across the globe on the iconic Tube map.

“Our cable car is unique to London and it provides spectacular views for those wanting to cross the Thames to get to the Royal Docks or Greenwich Peninsula,” says Josh Crompton, TfL’s head of the cable car. “These latest figures show that it remains as popular as ever with Londoners and visitors. The Emirates Air Line is an instantly recognizable part of London now and we are keen to work with a brand following our successful 10-year partnership with Emirates. This exciting opportunity will enable the successful brand to get both national and global awareness, building on the success of this unique part of the London transport network as well as feature on the Tube map.” 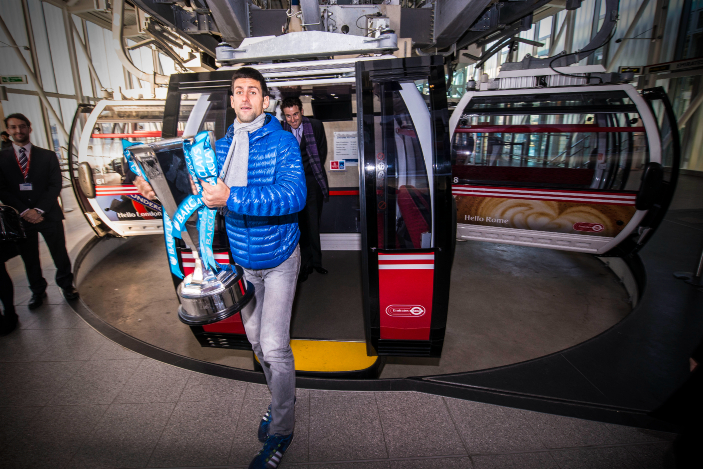 “Emirates is proud to have helped establish what has become an iconic part of the London skyline and to have contributed to the regeneration of the local area in the process,” says Boutros Boutros, divisional senior vice president, corporate communications, marketing and brand at Emirates. “We have thoroughly enjoyed our great 10-year partnership, but it is now time to pass the baton onto a new partner. We wish the team behind this unique experience all the very best in the future and will watch with pride.”

Providing connections to both ExCeL London and The O2, over the years the Emirates Air Line has been visited by famous faces such as Arnold Schwarzenegger, tennis player Novak Djokovic, boxer David Haye and singer-songwriter and podcaster Jessie Ware.