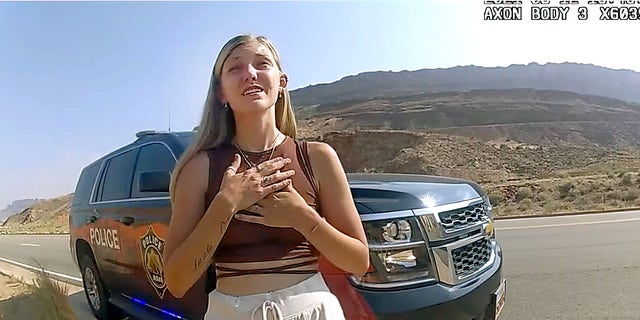 Domestic violence survivor Jana Kramer is speaking out about the dangers of abuse, stressing to her social media followers that it’s “never okay.”

The actress took to Instagram on Saturday after speaking at a seminar about domestic violence earlier in the day. The “I Got the Boy” singer also shared photos of a journal entry from 2004 about her first abuser.

She also cited homicide victims, such as Gabby Petito, whose homicide made national headlines last year.

“I spoke this morning at a seminar about domestic violence. All types of it. I decided to look back in my journal last night and I felt pulled to share this. This entry was from my journal back in 2004 when I was dating my first abuser. The sad truth is, I was in that cycle for many years after that. Believing that was what I deserved. I think back to the beautiful Gabby Petito and so many women who have lost their lives to the hands of a man and it’s heartbreaking the cycle and how we view ourselves and hang on to their words and ‘hope,’” Kramer wrote in her caption.

The Hallmark actress went on to share that “abuse is NEVER okay.”

HANK WILLIAMS JR.’S SON CLAIMS HE’S TRAPPED IN A CONSERVATORSHIP AND ‘WANTS OUT’

“Mentally, physically, emotionally etc. Never okay. I KNOW how hard it is to leave. I know how they can literally deplete you of any self worth. That’s what they do best. Make you believe no one else in the world would want you. Heres the truth. You DON’T deserve that. No one ever does. And I’m here to tell you you ARE WORTHY and you ARE STRONG ENOUGH,” she continued.

Kramer added that her first abuser tried to “kill me and strangled me to the ground.” She now considers herself “one of the lucky ones” for being able to get away.

In the journal entry shared to her Instagram on Saturday, Jana wrote about a man who told her “he was going to get his gun and kill me.”

Her entry continues, “I was the most confused and hurt in my life…and I couldn’t even recall what started it. He then went off on a huge psycho rant threatening to put the dogs on the 101 and kill them, kill himself, and burn my clothes, and ruin my life. Its hard to write all this and say I’m with him after all that. I was so weak that I let him back in. II want all the stuff that we have always talked abut but I can’t keep living like this. Things have sorta changed a bit…”

After being “choked to the ground” by the same man, a younger Jana admitted to herself that she’s “so done hurting.” “I truly realized that I deserve the best and I’ll get it.,” her journal entry concludes.

Gabby Petito appears highly distraught in Aug. 12 police bodycam video showing the couple pulled over in response to a report of a domestic incident between them.
(Moab PD )

This isn’t the first time Kramer has spoken out about past abuse. In September, the star penned a lengthy post to her 2 million Instagram followers in which she discussed her journey to healing after apparently being on the receiving end of threats and examples of gaslighting from previous partners.

“I’ve been mentally physically and emotionally abused in past relationships. I allowed certain behaviors to continue on because I actually believed the negative voices in my head that were spoken to me,” her post began.

The mother of two then got real about how past abusive relationships have stunted the realization of her positive attributes.

“For years I’ve repeated patterns, fallen into the trap of believing those voices, hurting myself and hurting others because of my desire to be chosen, to be enough. And I’ve fallen for the same abuse in a relationship because it’s what I thought I deserved. My healing…your healing…our healing is to stop those negative voices,” Kramer added.

“Now is the time to grow, learn, HEAL, and love ourselves. We are enough. You are enough. I am enough,” she continued.

Last year, Kramer filed for divorce from her ex, Mike Caussin. She has since announced on Instagram her new relationship with boyfriend Ian Schinelli.