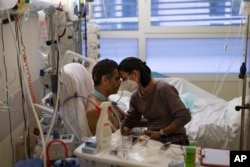 Doctors in Israel began administering a fourth dose of the COVID-19 vaccine Monday as part of a trial study to determine if the extra shot can boost immunity against the virus.

The trial study involving about 150 staffers at Sheba Medical Center near Tel Aviv comes just days after a special health advisory panel recommended that people 60 years old and older, as well as those with compromised immune systems and medical workers, receive a fourth dose of the Pfizer vaccine.Health Ministry Director Nachman Ash must give final approval to the panel’s recommendation.

Israel has outpaced much of the world in vaccinating its citizens, including offering booster shots, but the pace has slowed in recent weeks as it faces a fifth wave of new COVID-19 infections driven by the omicron variant of the coronavirus.

The fast-spreading variant has led to chaotic closures and cancellations around the world since it was first identified last month in a handful of southern African nations.

Thousands of flights in the United States and around the world were cancelled as flight crews called in sick after testing positive for COVID-19, leaving passengers stranded and unable to join family and friends during the Christmas holiday weekend.

In U.S. college football, two post-season “bowl” games scheduled this week are the latest to be cancelled due to a large outbreak of COVID-19 infections among players. Boston College was forced to withdraw from Monday’s contest against East Carolina in the Military Bowl inAnnapolis, Maryland, while the University of Virginia pulled out of its matchup against Southern Methodist University Wednesday in the Fenway Bowl, which was to be staged at the iconic home of Major League Baseball’s Boston Red Sox. The two programs join the University of Hawaii, Texas A&M and Miami to withdraw from their respective bowl games because of a high rate of infections that left them without enough players available for the game, which will cost the programs hundreds of thousands of dollars for failing to participate.

Elsewhere in the world, French President Emmanuel Macron is expected to announce a new set of COVID-19 related restrictions Monday after holding an emergency meeting with his Cabinet.

The new measures come as France posted a new single-day record of100,000 new coronavirus cases on Saturday.Among the expected new measures is limiting France’s health passport, which is required to enter restaurants and other indoor public venues, only to those who have been fully vaccinated.

And authorities in the northern Chinese city of Xi’an have tightened its strict lockdown of the city of 13 million residents as it continues to battle a spike in new COVID-19 cases. The new rules announced Monday bans residents from driving even within city limits unless for work or taking part in virus control work, with violators facing 10 days in detention and up to $78 in fines. Residents are already banned from leaving their homes unless they have essential jobs.

Xi’an, the home of the world-famous Terracotta Warriors, recorded 150 new cases for Sunday, bringing its total number of new infections since December 9 to well over 600, although it is not known if the surge is being driven by omicron or the previous delta variant.

Some information for this report came from the Associated Press, Reuters and Agence France-Presse.