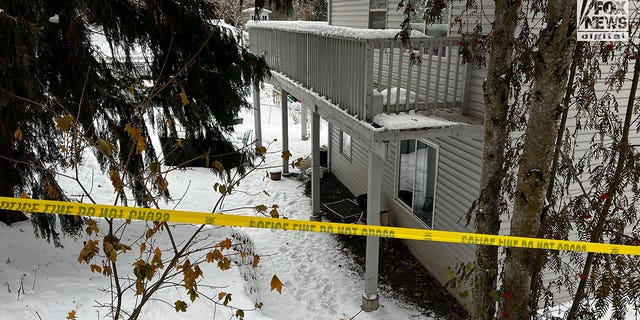 New video emerged Friday of officers responding to complaints of a loud party at the off-campus home 10 weeks before four University of Idaho students were murdered at the property, according to a report.

The body-camera footage shows Xana Kernodle, 20, opening the door of the King Road home at around 12:30 a.m. Sept. 2 wearing shorts and an orange sweatshirt.

“What’s your name?” an officer can be heard asking. “Xana,” she replied, according to the footage obtained by ABC News. Fox News Digital was not able to independently verify the footage.

“We can hear you from clear down the road when we were coming up here, we could hear the music,” one of the officers said.

UNIVERSITY OF IDAHO STUDENTS KILLED: A TIMELINE OF EVENTS

The victims of the Nov. 13 University of Idaho massacre.
(Instagram @xanakernodle / @maddiemogen / @kayleegoncalves)

“I’m so sorry about that,” she answered.

“Any outside music, any loud yelling needs to be done because next time you’re getting a ticket,” one of the officers cautioned her.

It was the second time cops had been called to the house in under four hours.

MOSCOW POLICE CALLED TO HOME OVER PARTY 10 WEEKS BEFORE MURDERS: ‘YOU HAVE A HOUSE FULL OF RANDOM PEOPLE’

Fox News Digital previously obtained police body-camera footage showing officers knocking on the door at 8:45 p.m. Sept. 1. Two unidentified men came downstairs to speak with them, and none of the residents appeared to be home.

“I just looked for everyone that lives here, and they’re not here right now,” one of the men said. “I have no clue where they went. No clue.”

The exterior of the backyard of the home in Moscow, Idaho, Dec. 4, 2022, where a quadruple homicide took place on Nov. 13.
(Hunter Richards for Fox News Digital)

Officers eventually spoke to 21-year-old Madison Mogen, who lived at the house before her murder.

“None of the occupants who live at this address are here right now. So now you have a house full of random people. You need to let them know that the noise needs to come down,” one of the officers said.

Mogen apologized profusely, but police appeared to have returned over the same complaint hours later.

Kernodle, Mogen, Ethan Chapin, 20, and Kaylee Goncalves, 21, were stabbed to death in the early morning hours of Nov. 13 inside the off-campus home near fraternity row and yards from university property.

Police have yet to publicly identify a suspect in the gruesome slaying.

Several neighbors and a former resident described the home as a “party house” and said there was often loud music playing as well as large numbers of people coming and going.

Police announced Thursday that a private company would begin cleaning the home Friday morning to remove “potential biohazards and other harmful substances used to collect evidence.”

Although the residence remains an active crime scene, it would soon be turned over to the property management company.

A supervisor for the company told the Idaho Statesman that the owner “doesn’t have future plans at this time” for the home.

The Moscow Police Department is urging the public to submit any images or information that they think could be important or useful to their investigation. They can do so by calling 208-883-7180, submitting tips through tipline@ci.moscow.id.us and sending digital media here.

Rebecca Rosenberg is a veteran journalist and book author with a focus on crime and criminal justice. Email tips to rebecca.rosenberg@fox.com and @ReRosenberg.