How We’ll Know When The COVID-19 Crisis Is Over 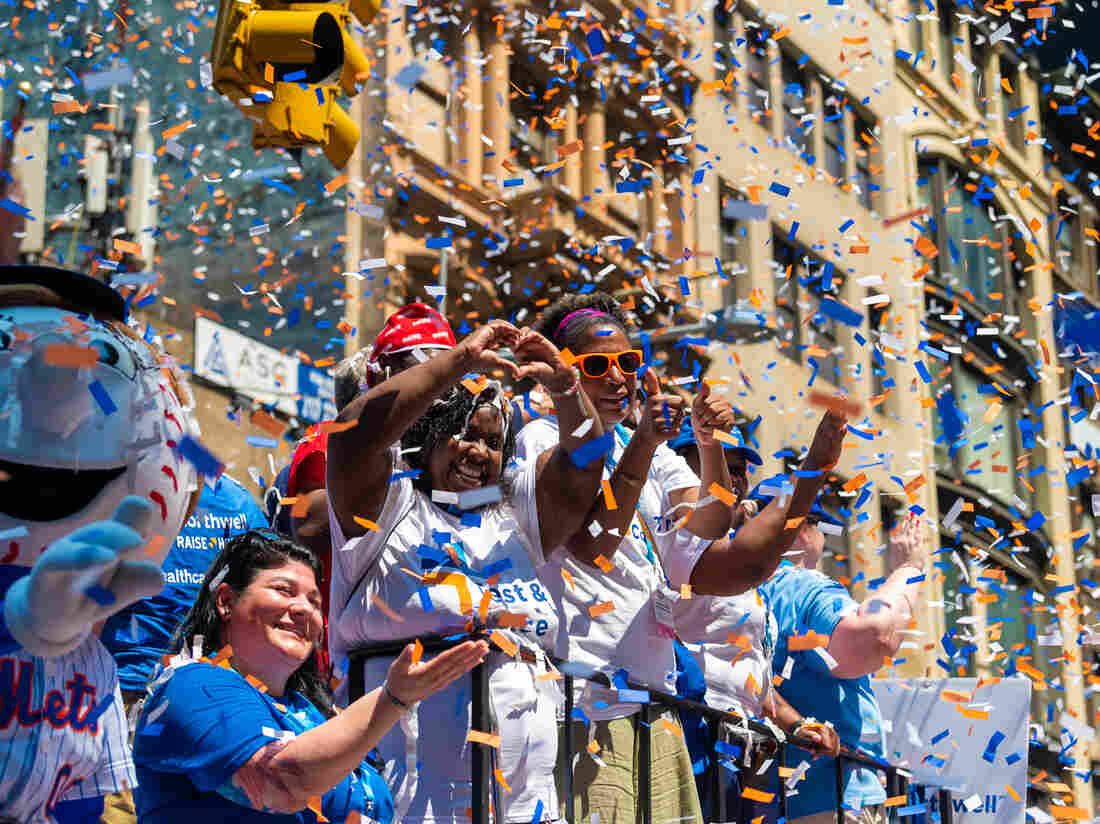 People relax at the Georgetown Waterfront Park on Monday in Washington, D.C. While pandemic restrictions have been lifted for much of the country, the Delta variant of COVID-19 is hospitalizing thousands of people in the U.S. who have so far not gotten a vaccine.

In many ways, American life is returning to normalcy: Masks are no longer required in many locations, schools and universities are slated to re-open, and the days of social distancing begin to fade as concerts and sporting events bring spectators back.

In the U.S., we’re now averaging 154 deaths a day from COVID-19 — a tiny fraction compared to the pandemic’s peak — and there are still some safety measures and restrictions in place. Late pandemic American life hasn’t quite returned to the status quo, but it feels much closer to normal than it did six months ago.

But while we may long for authorities to give an all-clear and say the pandemic is history, the crisis isn’t over, in the U.S. or abroad.

The question of when the crisis will actually be over is a layered one — with different answers from a local, national and global perspective.

After many months in which the U.S. led the world in coronavirus cases, the virus is now under much better control, due to wide availability of COVID-19 vaccines.

That federal emergency status is still in effect — it has been renewed several times, most recently in April. It can be extended by the Secretary of Health and Human Services for as long as the emergency is deemed to exist.

Healthcare workers, first responders and essential workers are honored for their service during the COVID-19 pandemic at the “Hometown Heroes” ticker tape parade in Manhattan on Wednesday.

It’s not clear whether the Centers for Disease Control and Prevention will issue any sort of all-clear. The CDC did not respond to NPR on the matter.

Ali Mokdad, an epidemiologist at the University of Washington, hopes that the CDC will eventually give Americans that go-ahead sign. He previously served in numerous roles over nearly 20 years at the CDC.

When the time comes, Mokdad tells NPR, “It’s very important for our own CDC … to say ‘We’re out of danger right now. We should move on with our lives.’ “

He says there aren’t set-in-stone metrics to determine when a pandemic is over, because the situation is dynamic and changing so fast. And the virus itself is evolving, too.

“When you look at the genetic makeup and sequencing of the virus … and how it has been changing, there’s still a lot of room for it to mutate. It’s not at the end of the mutation cycle that it can do. So that virus could still carry a lot of surprises,” he says.

The Foo Fighters reopened Madison Square Garden last month in New York City. The concert, with all attendees vaccinated, was the first in a New York arena to be held at full capacity since March 2020.

How a pandemic officially ends

The World Health Organization declared COVID-19 a pandemic on March 11 last year – the same day that life began to change dramatically in much of the U.S.

So when the virus eventually is under control, will WHO declare the pandemic over?

But it emphasized that the characterization of the outbreak as a pandemic has no formal meaning under international law.

What does have a formal meaning is a “public health emergency of international concern” – a status assigned to COVID-19 at the end of January 2020. That’s the highest level of health alarm under international law.

WHO convenes an international committee every three months to determine if an outbreak should still be considered such a global health emergency. When it’s over, WHO says it’s over. That’s what it did last summer regarding an Ebola outbreak in Africa.

But it will most likely be a while before that happens.

As WHO’s Director-General Tedros Adhanom Ghebreyesus frequently states: none of us will be safe until everyone is safe.

The U.S. is not out of the woods yet

The Delta variant has spread just as fast through the U.S. as epidemiologists feared it would. It now accounts for more than half the cases in the U.S., and far more than that in certain states.

Lynn Goldman, an epidemiologist and dean of the school of public health at George Washington University, says the U.S. has certain things working for it, and some against it.

The good news is we’ve shown the ability to lower rates of transmission and deaths from the virus. And of course, Americans have widespread access to COVID-19 vaccines.

The bad news is there’s resistance to the two main ways to prevent transmission – getting vaccinated and wearing a mask.

Graduates participated in a USC commencement ceremony at the Los Angeles Memorial Coliseum in May.

As a result, Goldman says, we’re likely to see continued transmission of the virus in the U.S., concentrated in the areas with lowest rates of vaccination.

The current vaccines are highly effective against COVID-19, including the Delta variant. That means vastly different outcomes for those who are vaccinated and those who aren’t. Last month, for example, 92 people died of COVID-19 in the state of Maryland. All of them were unvaccinated.

Local numbers can tell you more than state or national ones

The most precise indicators of progress or problems are very local.

National and even state-level metrics for infection or vaccination rates can be misleading, Mokdad says. A state’s overall vaccination rate can disguise much lower numbers in certain pockets that remain highly vulnerable to outbreaks.

While there are many ways to track progress (or not) in controlling the virus, Mokdad says one especially useful metric is hospitalizations.

“There is no way to make a mistake or underreport hospitalization for COVID-19, because everybody who goes to a hospital right now is being tested for COVID-19,” says Mokdad.

That’s in contrast to cases, which can go uncounted due to a lack of testing, and the number of deaths, which can spike weeks behind other indicators when an outbreak hits.

Accompanied by his family, a student gets vaccinated at a pop-up COVID-19 vaccination clinic on Tuesday in Winnetka, Calif.

Even though U.S. cases are much improved from the peak, unvaccinated people will continue to die from COVID-19 until we successfully control transmission.

Experts say the next big challenge will come this winter. Another wave is expected as people move inside during colder months. There will likely be some outbreaks as students go back to school — children under 12 are not yet eligible for the vaccines.

How dangerous the virus continues to be will depend on vaccination levels of the population and the lethality of the variant circulating when winter comes. How quickly a state or local government is willing to go back into restrictive measures – like wearing masks indoors — will play a role, too.

“For the short term, it will be seasonal, like what we see with the flu, simply because we don’t have enough vaccine to vaccinate everybody in the world,” Mokdad says.

If we do the right things like increasing production of the vaccine, he says, it’s possible we eventually won’t have to worry about COVID-19 anymore.

Goldman sees two possible scenarios for the U.S. in the near future.

One is that the virus evolves to more readily evade the vaccines that have been administered.

If that happens, she says, “then we’ll have to go into a whole other round of re-vaccinating everybody.” Drugmakers are already working on booster shots in case they become necessary.

On the other hand, that might not happen, and the current vaccines will continue to be highly effective.

In that case, Goldman believes that within the next several months “we’ll see near elimination of the pandemic, certainly in the United States and Europe, other wealthy countries, Japan, Taiwan,” while efforts will continue to immunize people in the rest of the world.

It’s very likely, Goldman says, that even when we can say the pandemic is over, transmission will continue in parts of the country that have low rates of vaccination.

But one thing is clear. No matter what happens, the effects of the pandemic — including long COVID, mental health issues, and economic fallout — won’t end when the official emergency does.