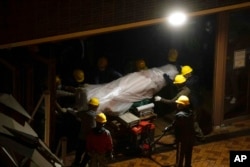 Thousands of weary residents are leaving Hong Kong every day as the city continues to battle its worst wave of the COVID-19 pandemic.

But an exodus of Hong Kong residents has been taking place for a couple of years, data suggests.

Experts say residents are leaving because of the city’s recent political unrest and ongoing restrictions due to the pandemic.

According to immigration data, over 94,000 Hong Kong residents have departed the city via Hong Kong International Airport in 2022 alone, with 26,000 residents arriving. It is not clear whether the departures are permanent or temporary.

Hong Kong has required lengthy quarantines for residents and professionals entering the city making it an unattractive prospect for residents to travel overseas.

Vera Yuen, a business lecturer at the Hong Kong University (HKU), said the length of the departures would depend on two factors.

“If the current travel restrictions and quarantine measures remain for a sustained period, these temporary exoduses may become permanent,” she said.

Hong Kong is facing its worst coronavirus infection rate to date. With the rapid spread of the highly transmissible omicron variant, the city has recorded more cases in 2022 than in the previous two years combined.

Hong Kong Chief Executive Carrie Lam has ordered compulsory testing for all 7.4 million residents in March, while rumors of lockdowns have unsettled the population with residents scrambling for food and resources, leaving some supermarket shelves empty.

“We used to have a large amount of civil societies, NGOs, or even elected legislative and district councillors to provide neighborhood aid. But after the introduction of [the] national security law, disqualification of councillors and dissolution [of] the civil society, this is one of the reasons that Hong Kong people are now hoarding food and daily supplies.”

“It’s hard for us to look for jobs. There’s no similar positions available and due to the epidemic, other industries are streamlining their manpower as well,” he added.

Following the anti-government protests in 2019, Beijing enacted a national security law in Hong Kong. It strictly prohibits acts deemed as secession, subversion, foreign collusion and terrorism, carrying a maximum of life in prison. Street protests have stopped, while civil societies and independent media outlets have closed. At least 150 dissidents have been arrested, including dozens of democratic lawmakers.

Discontent with living in Hong Kong under the new conditions was shown in Hong Kong’s legislative council elections in December, with only 30.2% of the population casting votes.

According to data released by the Census and Statistics Department, Hong Kong recorded a population decline of 1.2% in 2020, approximately 89,200 people, the same year the security law took effect.

A Hong Kong government representative denied the population decline was due to the law.

But Yuen said the recent population decline is no surprise to the pro-democracy opposition, many of whom are in jail and are facing charges under the security law, following their roles in the protests two-and-half years ago.

“[It is] not surprising to the opposition. The surprise is that the change came so quickly.”

Yuen said the trend of people leaving Hong Kong would continue amid recent political trauma in the city. She referred to the Tiananmen Square crackdown in Beijing in 1989, when China’s armed forces killed an unknown number of pro-democracy demonstrators following large-scale demonstrations.

“Estimates suggested that after Tiananmen, around half-a-million Hong Kongers emigrated in the ensuing years.”

“It will [continue]. There is a lot to prepare for migration. Early adopters prompt late adopters to think of leaving. What Hong Kong society will become and how the government will govern will further affect the intention to leave or to stay.”

Hong Kong was a British colony until 1997 when the city was returned to China.

Following the implementation of the security law in 2020, Britain offered a lifeboat plan to millions of Hong Kong residents.

British National Overseas (BNO) passport holders from Hong Kong now can work and study in Britain for five years and can apply for citizenship afterward. A recent amendment by British lawmakers has extended the plan to Hong Kong residents 18 to 25 years old.

According to data from the British government as of December, 103,900 BNO applications had been received.

“The U.K. has been the most favored destination for Hong Kong people who plan to leave,” Joseph Cheng, a political analyst formerly of Hong Kong, told VOA.

“Given the expectation that Beijing’s Hong Kong policy will be maintained, the momentum of the exodus will not decline for at least one or two years,” Cheng added.

But Yuen believes Hong Kong is still an attractive option for professional talent. In 2019, Hong Kong’s economy dropped into a two-year recession before rebounding last year with 6.4% growth.

“If the pandemic measure will be eased and business is still thriving in Hong Kong, top talents will come back.”

“For homegrown top talents, still the low tax and competitive wage in Hong Kong is quite attractive. If they choose to leave, they will likely make a big monetary sacrifice on top of separating from their families and friends. It’s never easy.”