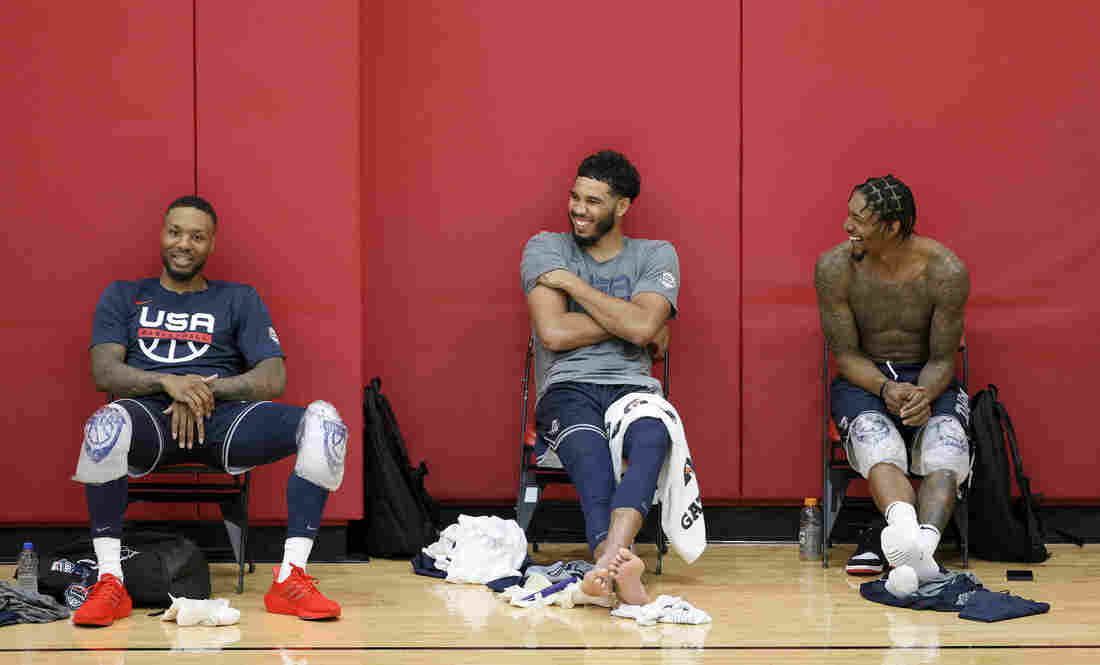 U.S. basketball player Bradley Beal appears in an exhibition game against Australia on Monday in Las Vegas. Beal tested positive for the coronavirus and will not be going to the Tokyo Olympic Games.

With Euro 2020 and the Stanley Cup in the books, the NBA Finals nearing an end, baseball past the All-Star break, and the Olympics a week away — sports are running full steam ahead, even as cases of COVID-19 tick up across the U.S.

Many stadiums and arenas in the U.S. have allowed fans to return at full capacity with many dropping mask requirements following a year of pandemic restrictions that prevented spectators and travel.

Plans for the Tokyo Olympics, which bring together athletes from around the world, are going ahead as scheduled next week.

Yet staff and fans remain at risk — as a handful of recent positives show, disrupting schedules and Olympic rosters — and some teams are still struggling to vaccinate a majority of their players.

From left, Damian Lillard, Jayson Tatum and Bradley Beal of the 2021 USA Basketball Men’s National Team talk after practice on July 7 in Las Vegas as the team gets ready for the Tokyo Olympics. Beal will not be playing in Tokyo.

Multiple Olympic teams have been affected by positive cases

Bradley Beal, a guard on the U.S. Olympic basketball team, will sit out the Summer Olympics, USA Basketball announced Thursday.

Beal, a star for the Washington Wizards, tested positive for the coronavirus and was placed under the team’s health and safety protocols earlier this week. ESPN and The Athletic reported that his spot on the roster would be filled by Keldon Johnson of the San Antonio Spurs.

Bradley Beal, who was placed under USA Basketball’s health & safety protocols on Wednesday, will remain in protocol & will be unable to participate in the Tokyo Olympic Games.

Out of an abundance of caution, Jerami Grant has been placed under health & safety protocols.

“As far as Bradley’s concerned, I’m dying for him. We all are,” said Team USA coach Gregg Popovich at a press conference on Thursday. “Since he was a little kid, this has been a dream of his. He was playing great. He was having fun, being a big part of us coming together chemistrywise and as a family — so for him, for his immediate family, it’s devastating.”

The team canceled an exhibition game against Australia that was scheduled for Friday. A second player, Jerami Grant, is also in the health and safety protocols, the team said, though it was unclear whether he would be allowed to travel to Tokyo. The Athletic reported that Grant has not tested positive for the coronavirus.

Meanwhile, as thousands of athletes and staff arrive in Tokyo for the Games, the city is under a state of emergency as cases rise. More than a thousand new cases are confirmed daily, bringing the city to its highest caseload since winter.

A number of other teams have already been affected by COVID-19 — including nearly the entire Refugee Olympic Team, whose arrival in Tokyo was delayed when a team official tested positive after a welcome party in Qatar for athletes and staff. Reports of teams in isolation include the Russian women’s rugby sevens team and the South African men’s rugby sevens team.

The IOC announced earlier this week that there are three positive cases among the roughly 8,000 athletes and staff who have arrived in Tokyo. All three are in isolation, and any close contacts are following health protocols.

Just two days after baseball’s All-Star Game drew the league’s top players together in Denver, Thursday night’s game between the New York Yankees and Boston Red Sox was postponed due to a COVID-19 outbreak among the Yankees. The teams are also scheduled to play Friday.

“We’re in a very fluid situation right now,” said Yankees manager Brian Cashman at a press conference Monday. “We’re thankful that we’re vaccinated in most cases — not in all cases, but in most cases — so we’re ultimately protected.”

Members of the Boston Red Sox take batting practice at Yankee Stadium on Thursday. The game between the Red Sox and the New York Yankees was postponed due to positive coronavirus tests within the Yankee organization.

The team announced three players were confirmed positive and moved to the COVID-19 list: pitchers Jonathan Loaisiga, Nestor Cortes Jr. and Wandy Peralta. All three had been vaccinated, two with Johnson & Johnson and one with a two-shot vaccine.

Additionally, Cashman said, an additional three players have tested positive on multiple rapid tests and are awaiting official lab results. The three players are currently in quarantine. He declined to say whether any are symptomatic.

“Thankfully I can report that, as of right now, everybody’s OK,” Cashman said. “Those vaccinations are working, and ultimately they’re to protect us against severe illness and/or death.”

According to ESPN, All-Star outfielder Aaron Judge is among the additional three positives, prompting concerns about his contact with other players at the All-Star Game, especially among his American League teammates.

As a result, the five Red Sox players who attended the All-Star Game are now undergoing additional testing, ESPN reported.

The postponement is the eighth game delayed this season due to COVID-19, but the first in months. The outbreak is the Yankees’ second this year, even though the organization says it has cleared a benchmark 85% vaccination rate among players and certain staff that allows the team to operate with fewer pandemic restrictions.

Four NFL teams have fewer than half of players vaccinated

With the NFL’s preseason games beginning in less than three weeks, The Associated Press reports that four teams are still under 50% vaccinated. Those teams are the Washington Football Team, Indianapolis Colts, Arizona Cardinals and Los Angeles Chargers.

Overall, about three-quarters of NFL players have received the vaccine, the AP reported. Ten teams have cleared an 85% threshold, including Pittsburgh, Miami, Carolina and Denver.

Teams that reach a certain vaccination rate will be allowed to travel and practice with fewer restrictions.

While the league is not requiring vaccinations, it has placed a number of restrictions on those who choose to skip the vaccine: daily testing, room capacity limits and restrictions on which team facilities they’re allowed to access.

Last season, the league was reluctant to cancel games due to COVID-19 outbreaks among players, instead preferring to delay the game and then proceed with any confirmed positives sitting out, often causing a competitive disadvantage for the affected team — most memorably when Denver was forced to start a practice squad wide receiver at quarterback and the Baltimore Ravens played a game down 16 players, including seven Pro Bowlers.