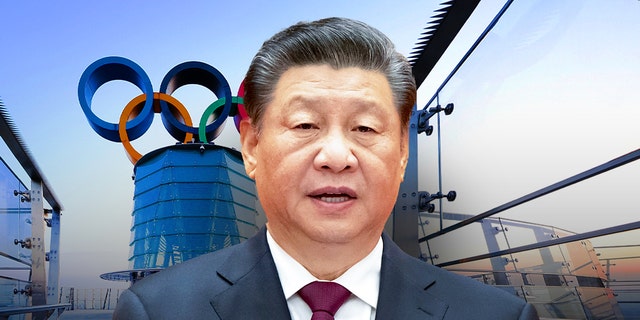 “Please know that I am personally offended by the posters. I treasure the opportunity to work with talented people from all over the world, including China,” George Washington University President Mark Wrighton wrote in an email.

“I, too, am saddened by this terrible event and we will undertake an effort to determine who is responsible.”

A screenshot of the email was posted to Twitter by the artist behind the posters, known only as Badiucao. He is a China-born political cartoonist who frequently uses his work to criticize the Chinese Communist Party.

The art took aim at Uyghur genocide, oppression in Tibet and Hong Kong, the coronavirus and China’s surveillance of its citizens.

In one poster, the words “Beijing 2022” are surrounded by depictions of Chinese athletes, including one snowboarding on a security camera, another participating in a curling competition with an image of the coronavirus molecule, an athlete holding a shotgun aimed at person wearing the Uyghur flag, and an athlete ice skating through what appears to be blood depicting Hong Kong’s flag.

The posters were designed as a “a full scale campaign to boycott Beijing Olympics,” according to Badiucao.

“As an artist, it’s my duty to use art to spark discussion on important issues of our time,” Badiucao told Fox News Digital in direct messages on Twitter on Monday. “As a China born [person], it’s my duty to help my people in China to fight against CCP‘s oppression.

“Silence is complicity. I must speak up,” he said.

Badiucao said he could not disclose who sent him the screenshot of Wrighton’s reported email but pointed to a WeChat group for the George Washington Chinese Cultural Association that also said “the university’s new president had said that he was personally offended by” the posters.

The posters first appeared on campus last Thursday, according to the WeChat group. They have all been removed and were posted without proper school permission.

“Some Chinese students saw the posters and engaged in heated discussions on social media platforms,” a message on the WeChat group reads, adding that some outraged students contacted the school’s police department to investigate.

Wrighton was elected the president of George Washington University last month, after he served as interim president in 2021.

The school’s president issued a statement Monday saying he “responded hastily” to concerns over the art and that such responses as his “were mistakes.” He added that no investigations are underway in regard to the art and that he supports “freedom of speech.”

“At that time, and without more context on the origin or intent of the posters, I responded hastily to the student, writing that I, too, was concerned. University staff also responded to ensure the posters were removed. These responses were mistakes. Every member of the GW community should feel welcome and supported, but I should have taken more time to understand the entire situation before commenting,” Wrighton said in his statement sent to Fox News.

“I have since learned from our university’s scholars that the posters were designed by a Chinese-Australian artist, Badiucao, and they are a critique of China’s policies. Upon full understanding, I do not view these posters as racist; they are political statements.”

“Mr Wrighton is not an ignorant person. And certainly he is not innocent after this saga as well,” Badiucao told Fox News. “Perhaps his intimate tie with CCP and RMB has covered his love to students and human rights.”

Critics of Wrighton’s remarks are sounding off on social media, including the China director of Human Rights Watch, who asked why Wrighton is “supporting suppression of #academicfreeom.”

China has long been criticized for its human rights record, and the Olympics, which kicked off in Beijing last week, are slated to shine a new light on China’s abuses.

Chinese President Xi Jinping, also general secretary of the Communist Party of China CPC Central Committee and chairman of the Central Military Commission, addresses a Chinese Lunar New Year reception at the Great Hall of the People in Beijing, capital of China, Jan. 30, 2022. The CPC Central Committee and the State Council held the reception on Sunday in Beijing. ___ BEIJING, CHINA – JANUARY 16: A general view the Beijing Olympic Tower on January 16, 2022 in Beijing, China. The Beijing 2022 Winter Olympics are set to open February 4th.
(Photo by Li Tao/Xinhua via Getty Images  |  Photo by Lintao Zhang/Getty Images)

“When this Beijing Olympics happens, they are planning that this will be them showing the world that they are the new superpower of the world, and you mark my words, after this Olympics if everything goes smooth, they’re going to take Taiwan. And when they take Taiwan, it’s over,” former U.N. Ambassador Nikki Haley said recently on “The Glenn Beck Program.”

Top Republicans in the House also told the U.S. Olympic and Paralympic Committee to keep U.S. athletes safe during the games, and to also warn them about China’s human rights abuses. While the FBI warned U.S. athletes to leave their personal cellphones at home and to stay off social media while in the country.