Gutfeld: US should follow lead of anti-mandate Canadian truckers 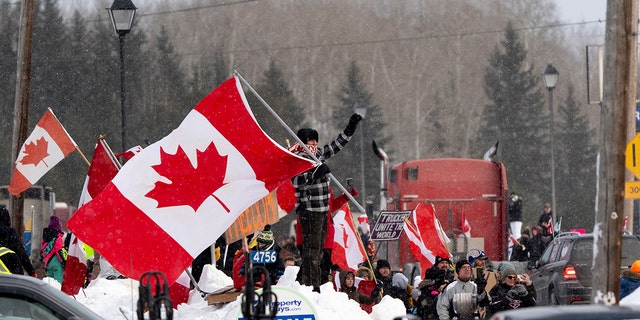 You know what makes me hot right now other than my blue eyes and gorgeous pecs?

Canadian truckers — yeah. In the era of COVID craziness, they said, “Screw this madness.” And they stepped on the gas.

NARRATOR: “This started with vaccine mandates, but for most here, it’s about a lot more. Well over a thousand people lining the Trans-Canada Highway outside of Winnipeg in -30 wind chills protesting what they call government overreach. It all started a couple of days ago in Delta, B.C. Truckers protesting vaccine mandates at the border. Now, as the convoy logs more kilometers, it’s getting more support.

Yeah, Canadian truckers protested vaccine mandates placed on their industry with a massive convoy that might break the world record set by Democrats vacationing in Florida.

According to organizers, it’s 70 “kilometers” long, which is roughly five of Kat’s hair extensions tied together.

Actually, it’s 43.5 miles, and that is pretty amazing. It’s the best thing to come from Canada since moose — that’s where they come from — Canada.

Anyway, the freedom convoy, as it’s called, left Sunday from Vancouver for Ottawa — places that hockey fans inform me are cities, to protest the mandates for cross-border truckers that took effect on Jan. 15.

It’s estimated that roughly 15 percent of truckers in the country are not fully vaccinated, which is about 16,000 truck drivers, or 80 percent of the total Canadian population.

But I enjoy the convoy. Fact is, if you mess with the truckers, you don’t get your stuff from MyPillow, to hockey equipment, beer, clothing, to 150 illegals from Guatemala. It just takes too long by dog sled.

Meanwhile, who comes out against the truckers? The Canadian Prime Minister Justin Trudeau, the low-life skunk.

My apologies to Pepe Le Pew. Here he is trashing the truckers.

CANADIAN PRIME MINISTER JUSTIN TRUDEAU: The small, fringe minority of people who are on their way to Ottawa or who are holding unacceptable views that they are expressing do not represent the views of Canadians following the science. Stepping up to protect each other is the best way to continue to ensure our freedoms.

He is the PM — more like a B.M. This pile of human dung just said the protesters are a small, fringe minority who are holding unacceptable views.

So what are these unacceptable views, you jerk? Explain it to us, since this fringe helped keep your country going when you couldn’t.

Seriously, he just crapped on people who made sure Canadian citizens like him got their toilet paper, their ginger ale, the cheese curds for their poutine, or whatever they eat in Canada these days, during the pandemic.

Just like having a dad who was prime minister, working from home is a privilege most don’t have.

These people work tirelessly until they’re red in the face, as opposed to their PM, who prefers to only be in blackface when the only thing black about him is his heart.

If he was in Alberta, they’d sell him as oil shale.

What an embarrassing, virtue-signaling impostor.

Yes, I wrote this while I was drinking, and those raspberry hard seltzers were delivered by truckers, so God bless them.

But you know who else rules? The Danes. You might even say they’re great — not the dogs. The people of Denmark or the government of Denmark.

They have a government there, I hear, unlike our country today.

Anyway, yesterday, Denmark also became heroes by announcing the end of the pandemic. And on what day to day choose, you ask?

Yes, I answer, Feb. 1 — the date this show picked as the end to the pandemic.

Yeah, apparently they watch “Gutfeld!” in between cobbling and smoking mackerel.

How amazing is that? According to whatever I read, Denmark is ending all its pandemic measures and virus restrictions on the last day of January.

That’s Martha McCallum’s birthday, by the way. Yeah, I know. I hope she likes the present I got her, although I forgot to poke holes in the box.

But their reasoning for ending the restrictions — the disease, like Andrew Cuomo, no longer poses a threat to society.

So they’ll be reclassifying the pandemic as an endemic. For more, let’s go to our Denmark correspondent Hans Leifen Schnoz.

JUDGE JEANINE PIRRO: Greg, are you stupid? Do I look Danish to you? Look, I’m not a Danish correspondent. Get your head out of your a–. And I’m working. Leave me alone.

So this easing of restrictions follows other countries like the U.K. and Ireland, as people find out that omicron is less severe than the sentences handed down for a gun crime.

Where Delta was Charles Manson, omicron is more like Charles Nelson Reilly, so they realize that no restriction is going to stop the contagious, but mild, strain.

Omicron is like Dana Perino’s dog pictures. It’s everywhere, but you can handle it.

We don’t need the government or Neil Young telling us what to do.

Right now, Denmark, a nation of 6 million people, has just 44 COVID-19 patients in the ICU, and I’m willing to bet they are older than Stuart Varney and Brit Hume combined.

So like listening to the couple in the next apartment having sex, it sounds to me like they know what they’re doing.

So what about us? What are we doing?

Feb. 1 is next week. When are we going to take the lead here and bring this to an end since our leaders won’t?

So let’s take inspiration from the Canadian truckers and the Danish cobblers and declare this thing over once and for all.

And then get back to normal life where we make fun of Canadians and Danes instead of complimenting them.

This article is adapted from Greg Gutfeld’s opening monologue on the January 28, 2022 edition of “Gutfeld!”

Around a dozen fearless members of the public dug through rubble to rescue a seriously injured man from a burning building after a gas...
Read more
Emergency

WASHINGTON — The White House signaled Monday that it is not pursuing a Senate Democratic proposal that says the Biden administration could offer abortion...
Read more