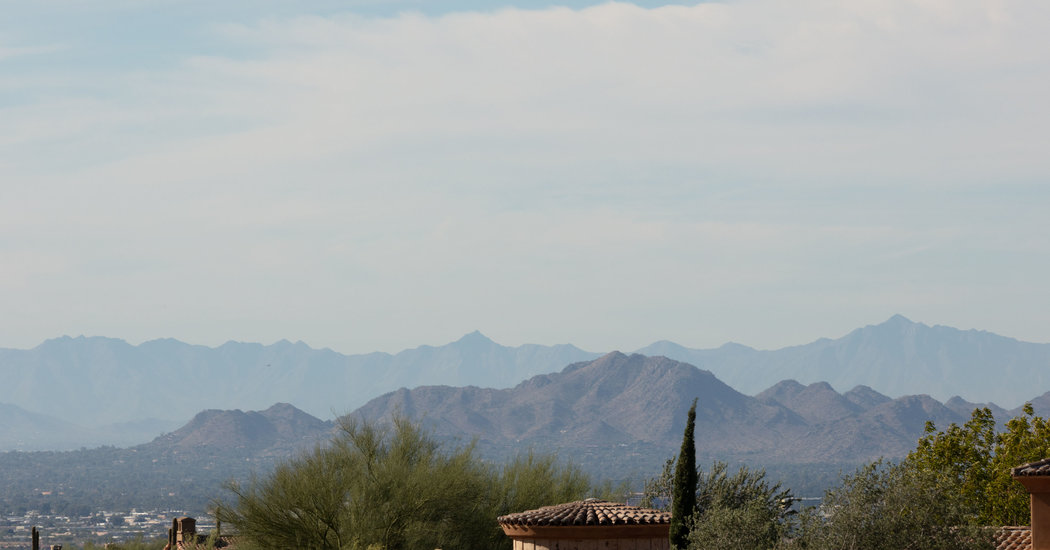 The F.A.A. is rolling out a system that allows planes to fly closer to one another, but the roar that it creates is unbearable, people in the flight paths say.

Fall used to be Michael Baker’s favorite time of year in Scottsdale, Ariz. Mr. Baker, the retired owner of a medical device distributor, would sit outside in the cool evening, enjoying the quiet and his view of the mountains.

That all ended five years ago, when airplanes started roaring overhead every three to five minutes. He called Phoenix Sky Harbor International Airport and found out that the Federal Aviation Administration had changed the flight paths.

Now, he said, “you can’t open your doors and windows.” Evenings, he stays inside. On Sunday mornings, when he does yard work, the aircraft noise begins about 6.

The new flight paths were the result of a long-planned F.A.A. program to modernize the nation’s airspace, minimize wasted fuel and increase the number of flights. The Next Generation Air Transportation System, known as NextGen, uses GPS instead of radar to guide planes and digital communication rather than radio. Because air traffic controllers know exactly where planes are, they no longer need to leave as much of a buffer between them. Flight paths are more predictable, narrower and at lower altitudes.

But as the F.A.A. has rolled out the program, the people who live below the new, more concentrated flight paths have risen up. Dozens of grass-roots organizations nationwide with names like the Scottsdale Coalition for Airplane Noise Abatement, UproarLA and Southern Maryland Fair Skies Coalition say NextGen is disrupting their lives with excessive noise and provoking concern over possible risks to health and property values. Now, after initially overlooking affected communities, the F.A.A. is trying to involve them.

“It is a tinderbox of conflict between airports and the residents that surround them,” said Henry Harteveldt, the founder of Atmosphere Research Group, a travel-industry advisory firm. His own sleep has been interrupted by noise from San Francisco International Airport.

Clifford Winston, an economist at the Brookings Institution, said the F.A.A. should have anticipated that some residents would be upset. “Why don’t we have an efficient noise policy when they’ve changed the rules of the game?” he asked.

Congress initiated the NextGen program in 2003 to improve the efficiency of air traffic; the F.A.A., as part of that effort, later designated 11 so-called metroplexes — where several airports serve major metropolitan areas — as a focal point. But community input on the new routes was not part of the plan.

As flight paths changed, residents of Boston; San Francisco; Culver City, Calif.; and Washington, D.C., sued the F.A.A. over the increase in noise. The City of Phoenix brought the first successful lawsuit and had the flight paths reversed in 2017. Phoenix Sky Harbor International Airport tallied fewer than 25 noise complaints a year from 2010-14. When flight paths were altered in 2014, that number jumped to over 2,500; in 2015, complaints increased to almost 12,000.

The F.A.A. said it was “committed to working with airport and community-sponsored round tables to understand and address concerns regarding noise from aviation.” It added, “In the event airspace changes are recommended, care must be taken to avoid simply shifting aircraft noise from one community to another and to ensure broad community buy-in for the proposed changes.” The system is now expected to be fully rolled out by 2021, to allow the F.A.A. to confer with communities it overlooked.

Although not designated a metroplex, the New York area is one of the most congested in the country for air traffic. Its three airports, Kennedy International, LaGuardia and Newark Liberty, have some NextGen features, and residents in nearby Nassau County and Queens in particular complain frequently about noise.

“A misconception about sound is as long we don’t hear it, it doesn’t matter if you hear it,” said Erica Walker, a postdoctoral researcher in the Boston University School of Public Health. She is monitoring sound levels in several Boston neighborhoods and in October began a yearlong sound study of flight paths in Chelsea, just outside the city, where the median household income is $51,000. Residents tell her, “No one is going to listen to us.”

Thanks to quieter engines and planes, fewer people are exposed to significant noise now than in the mid-1970s, falling to just over 400,000 now from about seven million, according to the F.A.A. The number of people flying has risen to one billion from 200 million in 1975.

The problem is the concentration of flights. Peter Kirsch, a partner at Kaplan, Kirsch and Rockwell, the law firm that represented Phoenix in the F.A.A. suit, said noise standards had evolved in the last four decades. What was previously acceptable is not now, he said.

R. John Hansman, a professor of aeronautics at Massachusetts Institute of Technology who studies aviation noise, said his research showed that people experience a broad spectrum of noise sensitivity. Still, he said, “the more precise trajectories show increases in complaints.”

Scottsdale didn’t join the Phoenix lawsuit challenging the new flight paths, but Jim Lane, Scottsdale’s mayor, said his city had not ruled out a new suit. While the F.A.A. restored former flight paths over Phoenix in 2017, the new ones over Scottsdale stayed.

Still, Mr. Lane estimates that fewer than 10 percent of Scottsdale’s 250,000 residents, including Mr. Baker, are affected. Citywide there is no agreement about opposing the flight paths.

Mr. Baker said no one at a meeting of the homeowners’ association this past spring was happy. But he said he was not planning to move. “We’re going to fight this.”

Bud Kern, who organized the Scottsdale Coalition for Airplane Noise Abatement, said he hears plane noise every 90 seconds during busy times. The F.A.A. is finishing up responses to comments it received last spring during its outreach in the Phoenix area.

Michelle Allen of Studio City, Calif., understands his frustration. For the last two years, she said, she has been awakened by plane noise at random times throughout the night. She believes it is coming from Hollywood Burbank Airport, about six miles away. It started the new paths in March 2017.

She said that her windows rattle and her bed moves, and that the only time she sleeps through the night is while she is away on vacation. The noise is affecting her 12-year-old son’s academic performance, she said. He loses his train of thought while doing homework.

Her preferred recourse, besides the airplane hotline, is to complain via an app called AirNoise, which records offending flights and sends the information to Hollywood Burbank Airport.

Patrick Lammerding, the airport’s deputy executive director of planning and development, said the app complaints don’t include details about the noise, but Hollywood Burbank Airport provides an online form to track noise issues and a toll-free, 24-hour hotline. He said that in 2016, the airport received 577 complaints; a year after the changes, in 2018, the number rose to 222,798; in the first half of 2019, complaints soared to 616,022.

Experts say there are ways to make noise less noticeable. For example, Hollywood Burbank Airport asks passenger airlines to comply with a curfew of 10 p.m. to 7 a.m. Slowing the speed of the airplane is possible, although that increases carbon dioxide and other emissions, making an aircraft less fuel efficient and an airline less environmentally responsible.

Planes could also remain at higher altitudes before descent, but “it’s a multidimensional game of chess,” Mr. Harteveldt said. “One wrong move and it’s a terrible loss. One smart move and it’s a win-win for everyone.”