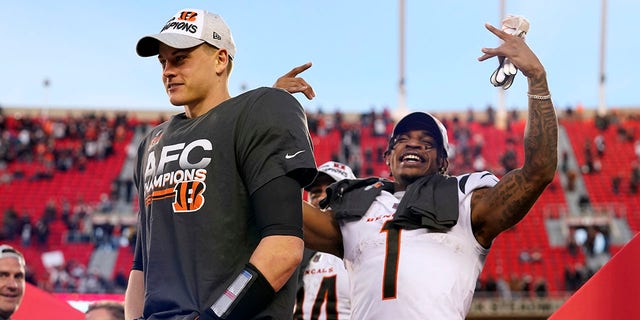 Legendary Cincinnati Bengals wide receiver Chad “Ochocinco” Johnson is going with his former team in Sunday’s Super Bowl matchup against the Los Angeles Rams, and he thinks newly named NFL Offensive Rookie of the Year Ja’Marr Chase is going to be the player to watch.

SUPER BOWL 2022: WHAT TO KNOW ABOUT THE GAME

“The funny thing about their WiFi – I’m not going to say connection – their WiFi is what it’s always been. Think about what they did at LSU,” Johnson said. “There’s a reason Burrow went to the table and said I want Ja’marr Chase to come in. Make sure we draft Ja’Marr Chase and not the lineman (Penei Sewell).”

Cincinnati Bengals wide receiver Ja’Marr Chase celebrates after scoring a touchdown during the second half against the Kansas City Chiefs Jan. 2, 2022, in Cincinnati.
(Associated Press)

“I think Chase being a Bengal is part because Joe Burrow wanted to have him here so they could pick up right where they left off at LSU, which is why they’ve been so stellar in just his rookie season,” Johnson continued.

Johnson also spoke about the possible matchup between Chase and Rams’ cornerback Jalen Ramsey, saying it would be hard to predict who might have the edge if those two are paired up Sunday.

Johnson predicted the Bengals will walk away Super Bowl champs with a 20-17 win and says fans shouldn’t expect to see the large scoring gap they did when Cincinnati took on the Kansas City Chiefs in the AFC Championship Game.

“I think the fact that the game got away from the Bengals, and they were able to come back in the second half … I think you make certain adjustments to make sure that doesn’t happen because in a game of this magnitude you don’t want to be climbing from behind. You want to keep it even or you wanna go ahead, you wanna play smart.”

Johnson spoke to Fox News just hours before Chase was named the 2021 NFL AP Offensive Rookie of the Year. He predicted Chase would win. When asked if Chase could be the first NFL rookie to win Super Bowl MVP, the former wideout said Chase had a legitimate shot.

Chad Ochocinco of the Cincinnati Bengals during a game against the Carolina Panthers at Bank of America Stadium Sept. 26, 2010, in Charlotte, North Carolina.
(Getty Images)

“You know that I’m going to say it, and if it comes true and comes to fruition I’m going to play the lotto right after.”

Chase was also named the 2021 Pepsi Zero Sugar NFL Rookie of the Year, an honor Johnson accepted on his behalf.

The Bengals and Rams meet at SoFi Stadium in Inglewood, California, Sunday at 6:30 p.m. ET.