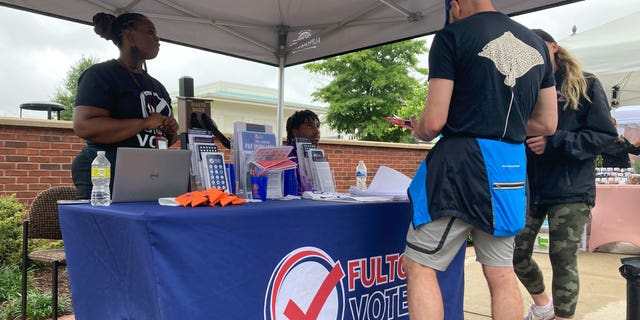 Outraged by false allegations of fraud against a Georgia elections employee in 2020, Amanda Rouser made a vow as she listened to the woman testify before Congress in June about the racist threats and harassment she faced.

“I said that day to myself, ‘I’m going to go work in the polls, and I’m going to see what they’re going to do to me,’” Rouser, who like the targeted employee is Black, recalled after stopping by a recruiting station for poll workers at Atlanta City Hall on a recent afternoon. “Try me, because I’m not scared of people.”

About 40 miles north a day later, claims of fraud also brought Carolyn Barnes to a recruiting event for prospective poll workers, but with a different motivation.

“I believe that we had a fraudulent election in 2020 because of the mail-in ballots, the advanced voting,” Barnes, 52, said after applying to work the polls for the first time in Forsyth County. “I truly believe that the more we flood the system with honest people who are trying to help out, it will straighten it out.”

Amanda Rouser poses for a photo in front of a recruiting desk for new poll workers at Atlanta City Hall on Sept. 14, 2022, in Atlanta. Rouser was motivated to serve as a poll worker for the first time during the upcoming midterm election by false allegations of fraud against a Georgia poll worker after the 2020 presidential election. (AP Photo/Sudhin Thanawala)
(Associated Press)

Barnes, who declined to give her party affiliation, said she wants to use her position as a poll worker to share her observations about “the gaps” in election security and “where stuff could happen afterwards.”

Nearly two years after the last presidential election, there has been no evidence of widespread fraud or manipulation of voting machines. Numerous reviews in the battleground states where former President Donald Trump disputed his loss to President Joe Biden have affirmed the results, courts have rejected dozens of lawsuits filed by Trump and his allies, and even Trump’s own Department of Justice concluded the results were accurate.

Nevertheless, the false claims about the 2020 presidential contest by the former president and his supporters are spurring new interest in working the polls in Georgia and elsewhere for the upcoming midterm elections, according to interviews with election officials, experts and prospective poll workers.

Like Rouser, some aim to shore up a critical part of their state’s election system amid the lies and misinformation about voting and ballot-counting. But the false claims and conspiracy theories also have taken hold among a wide swath of conservative voters, propelling some to sign up to help administer elections for the first time.

People visit a booth set up by Fulton County to recruit new poll workers at the Alpharetta Farmers Market on Sept. 10, 2022, in Alpharetta, Ga. Lies about the integrity of the 2020 presidential contest by former President Donald Trump and his allies are spurring new interest in working the polls in Georgia and elsewhere in the nation for the upcoming midterm elections. (AP Photo/Sudhin Thanawala)
(Associated Press)

The possibility they will play a crucial role at polling places is a new worry this election cycle, said Sean Morales-Doyle, an election security expert at The Brennan Center for Justice.

“I think it’s a problem that there may be people who are running our elections that buy into those conspiracy theories and so are approaching their role as fighting back against rampant fraud,” he said.

But he also cautioned that there are numerous safeguards to prevent a single poll worker from disrupting voting or trying to manipulate the results.

The Associated Press talked to roughly two dozen prospective poll workers in September during three recruiting events in two Georgia counties — Fulton County, which includes most of Atlanta and where more than 70 percent of voters cast a ballot for Biden, and Forsyth County north of Atlanta, where support for Trump topped 65 percent.

About half said the 2020 election was a factor in their decision to try to become a poll worker.

“We don’t want Donald Trump bullying people,” said Priscilla Ficklin, a Democrat, while taking an application at Atlanta City Hall to be a Fulton County poll worker. “I’m going to stand up for the people who are afraid.”

Carlette Dryden said she showed up to vote in Forsyth County in 2020 only to be told that she had already cast a mail-in ballot. She said elections officials let her cast a ballot later, but she suspects someone fraudulently voted in her name and believes her experience reflects broader problems with the vote across the country.

Still, she said her role was not to police voters or root out fraud.

An election official assists a voter at a polling location during the Senate runoff elections in Atlanta, Georgia, U.S., on Tuesday, Jan. 5, 2021. Georgia voters are turning out in record numbers to cast ballots in two runoff elections that will determine which party controls the Senate for the next two years. Photographer: Dustin Chambers/Bloomberg via Getty Images

“What I’m signing up to do is to help others that are coming through here that may need assistance or questions answered,” she said.

Georgia was a focus of Trump’s attempts to undo his 2020 election defeat to Biden. He pressured the state’s Republican secretary of state in a January 2021 phone call to “find” enough votes to overturn Biden’s victory in the state and seized on surveillance footage to accuse the Black elections worker, Wandrea Moss, and her mother, Ruby Freeman, of pulling out suitcases of fraudulent votes in Fulton County. The allegation was quickly knocked down, but still spread widely through conservative media.

At a farmer’s market in the politically mixed suburb of Alpharetta north of Atlanta, Deborah Eves said she was concerned about being harassed for working at a voting site but still felt compelled to sign up.

A substitute teacher and Democrat, Eves visited a recruiting booth set up by Fulton County officials next to stands selling single origin coffee, honey and empanadas.

“I feel like our government is ‘we the people, and ’we the people’ need to step up and do things like poll working so that we can show that nobody’s cheating, nobody’s trying to do the wrong thing here,” she said.

Allison Saunders, who worked at a voting site for the first time during the state’s May primary, said she believes Moss and Freeman were targeted because they are Black. Saunders, a Democrat, was visiting the farmer’s market with her son.

“More people that look like me need to step up and do our part,” said Saunders, who is white. “I think it’s more important to do your civic duty than to be afraid.”

Threats after the 2020 election contributed to an exodus of full-time elections officials around the country. Recruiters say they have not seen a similar drop in people who have previously done poll work — temporary jobs open to local residents during election season. But some larger counties around the country have reported that they are struggling to fill those positions.

Working the polls has long been viewed as an apolitical civic duty. For first-time workers, it generally involves setting up voting machines, greeting voters, checking that they are registered and answering questions about the voting process.

Elections staff in the U.S. generally do not vet the political views of prospective poll workers deeply, although most states have requirements that seek to have a mix of Democratic and Republican poll workers at each voting location.

Forsyth County’s elections director, Mandi Smith, said she was not worried about having people who believe the last presidential election was fraudulent serve as poll workers. The county provides training that emphasizes the positions are nonpartisan and that workers must follow certain rules.

“It’s a very team-driven process, as well, in the sense that there are multiple poll workers there and you are generally not working alone,” she said.

Ginger Aldrich, who attended the county’s recruiting event, said she knows people who believe the last election was stolen from Trump. Their views made her curious about what she described as the “mysterious” aspects of the voting process, such as where ballots go after they leave the voting site.

“There’s going to be some people that are unscrupulous, and they are going to spend all this time figuring out how to beat the system,” said Aldrich, who is retired.

While she believes there is fraud in elections, she said she was willing to use her experience as a poll worker to try to convince people that there were no problems in her county with the midterm elections.