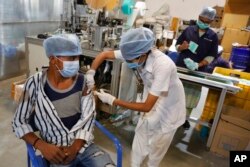 Denmark proposed new lockdown measures Friday to curb the alarming spread of the new omicron variant of the coronavirus, as other European countries consider imposing travel and other restrictions to stem the variant’s spread.

The new variant has fueled infections in Britain close to the peak levels of early 2021, while other European countries and the United States are also experiencing surges.

Danish Prime Minister Mette Frederiksen said at a news conference the restrictions, which need parliamentary approval, would include crowd limits in stores, the closure of theaters, other entertainment venues and conference centers, and a mandatory mask requirement in most public places.

The Danish government reported 11,559 omicron cases Friday – a sharp increase from a day earlier – and said the new variant, which is more transmissible than earlier variants, now accounts for one-fifth of new cases reported daily.

Ireland and Germany were also considering further restrictions just days before Christmas and other holiday festivities begin in earnest. Earlier this week, France restricted travel to and from Britain, where omicron is surging.

A German Health Ministry spokesperson said the government could announce later Friday that travelers to Germany from Britain would be required to quarantine for two weeks. The restrictions are being considered as German Health Minister Karl Lauterbach predicted Friday the omicron variant would spark a “massive fifth wave” of the pandemic.

Portugal’s health minister warned Friday that omicron cases were doubling every two days and could account for 80% of all new cases by the end of December, much higher than the current rate of about 20%.

The country’s official count Friday was 69 confirmed cases. Portugal has one of the world’s highest rates of vaccination against COVID-19.

In Australia on Friday, authorities hurried to track down hundreds of people who attended a Taylor Swift album release party in Sydney last week. The party has blown into a super-spreader event, propelling new infections that include the omicron variant to a new pandemic high for the second straight day.

In India on Friday, the health ministry reported a total of 101 cases of the omicron variant and that some districts were showing a rise in overall infections.

More than 5.3 million people have died of COVID-19 globally since the coronavirus emerged in Wuhan, China, almost two years ago, according to the Johns Hopkins University Coronavirus Resource Center.

The center reported more than 8.6 billion doses of vaccines had been administered worldwide as of mid-day Friday, a massive logistical campaign complicated by omicron’s surge.

Several countries are racing to accelerate vaccination campaigns as mounting evidence supports the need for booster doses to combat the omicron variant.

In Europe, European Union governments agreed to order more than 180 million doses of a BioNTech-Pfizer vaccine adapted for omicron, the head of the European Commission said.

South Africa, which first identified the omicron variant, said Friday it would donate about 2 million doses of Johnson & Johnson’s vaccine to other African countries next year via a medical supplies platform established by the African Union.

Some information in this report came from Agence France-Presse, The Associated Press and Reuters.