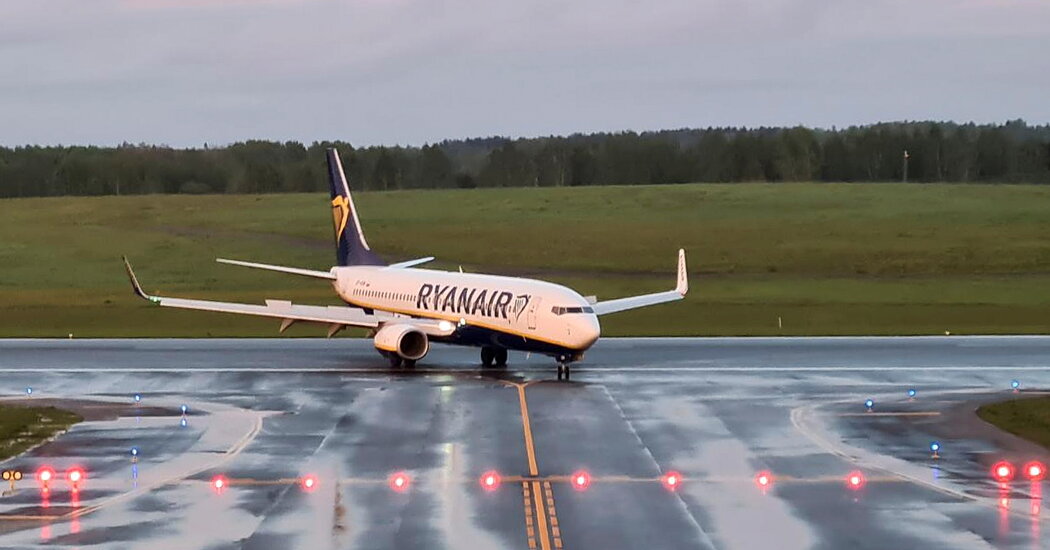 A former air traffic controller has been telling Polish investigators what he knows about the diversion of the plane carrying a Belarus dissident in May.

WARSAW — This summer, as Polish guards repelled migrants trying to cross their country’s eastern border with Belarus, one man who slipped furtively into Poland received a warm but top-secret welcome.

Unlike the desperate people from Iraq and elsewhere seeking a better life in Europe, the man was offering a dramatic intelligence coup — inside information on the forced landing just a few weeks earlier in Minsk, the Belarusian capital, of a Ryanair flight from Athens to Vilnius, the capital of Lithuania.

The plane’s passengers included a prominent opponent of President Aleksandr G. Lukashenko of Belarus, the dissident journalist Roman Protasevich, who was arrested along with his Russian girlfriend, Sofia Sapega, when the plane landed in Minsk.

European security officials who requested anonymity because they were not authorized to discuss confidential information said that the man welcomed by the Poles had worked as an air traffic controller at Minsk’s airport. Since his defection, he has provided detailed evidence that the Ryanair flight was targeted for a fake bomb threat as part of an operation to grab Mr. Protasevich orchestrated by Belarus’s intelligence service, the officials said.

Asked about the defection, Stanislaw Zaryn, director of Poland’s Department of National Security, declined to comment on specifics but said that Polish officials investigating what he described as the Ryanair “hijacking” had managed “to obtain an account of a direct witness of the actions taken at the control tower in Minsk.”

He added that, according to the witness, an officer of Belarus’s intelligence and security agency, the K.G.B., was in the control tower at the time and “at a crucial moment took control of the air traffic controller.” Throughout the incident, the Belarusian officer “maintained ongoing telephone contact with someone to whom he reported on what was currently happening with the plane,” Mr. Zaryn said.

The defector’s account of what happened does not fundamentally alter what has been suspected all along but, provided by a witness who was directly involved, it helps Polish prosecutors build a solid legal case against Belarusian officials that could be tested in court, though none of those implicated is likely to appear for any future trial.

The security officials named the air traffic controller as Oleg Galegov, an ethnic Georgian who is married to a Belarusian woman. On duty in the Minsk control tower at the time of the Ryanair incident, Mr. Galegov was responsible for telling the plane’s pilot that there was a bomb on board and that he should halt his journey to Vilnius and land in Minsk for “security reasons.”

“For your information, we have information from special services that you have a bomb on board and it can be activated over Vilnius,” the air traffic controller said, according to a transcript of his communication with the Ryanair plane released in May by the Belarusian authorities. The pilot, a Lithuanian, was skeptical.

Told that airport security staff had received an email about a bomb, the pilot asked which airport had been sent the warning. After 20 minutes of back and forth the pilot was told that “the code is red,” and he reluctantly agreed to divert to Minsk.

Mr. Lukashenko personally ordered a fighter jet to escort the plane. According to his press service, Mr. Lukashenko gave an “unequivocal order” to “make the plane do a U-turn and land.”

The subsequent defection of the air traffic controller, which has not been previously reported, has helped Polish prosecutors working on a criminal investigation into the incident. The Boeing 737 at the center of the drama was registered in Poland and operated by a Polish subsidiary of Ryanair, an Irish carrier.

It also helps explain why relations between Belarus and Poland have become so poisonous, with Mr. Lukashenko accusing his western neighbor of plotting “an insurrection” to unseat him, and Poland accusing Belarus of funneling migrants to the border in a “hybrid war.”

As the two countries traded vitriol in public, the air traffic controller from Minsk has been telling Polish investigators what he knows about the forced landing. That information threatens to expose the role of Mr. Lukashenko’s brutal security services in what the Ryanair boss, Michael O’Leary, has condemned as a “premeditated hijacking.”

Nasha Niva, an independent news outlet whose website has been blocked by the Belarusian authorities, reported on its Telegram channel in July that Mr. Galegov had gone on vacation in June and had not been seen since. It quoted a colleague as saying that he had taken a holiday in his home country, Georgia.

Ivan Gerlovsky, deputy general director at Belaeronavigatsiya, a state company that manages air traffic control in Belarus, told the outlet that the personnel department had called Mr. Galegov’s mother-in-law in Minsk without success and was trying to establish where he was.

Belarus’s security agency, called the K.G.B., as it was when the country was part of the Soviet Union, in August signed a cooperation agreement with the security service of Georgia, another former Soviet republic — which would probably have raised the risks for Mr. Galegov if he had been in Georgia. By then, however, he had arrived in Poland He has since left, one of the European security officials said. His current whereabouts was unclear.

Since disappearing over the summer, the air traffic controller has deleted all his social media accounts.

The forced landing of a passenger jet carrying 170 people stirred outrage across Europe and prompted demands that the European Union strengthen sanctions it had already imposed on Belarus over a 2020 presidential election in which Mr. Lukashenko claimed an implausible landslide victory.

When European foreign ministers met in May to discuss a new raft of measures aimed at punishing Belarus, Mr. Lukashenko responded with a threat to mobilize migrants as a retaliatory weapon.

Soon after the European bloc imposed new sanctions in June, what had been a trickle of migrants from Belarus into Poland and also into Lithuania, both members of the European Union and NATO, suddenly became a flood as Belarus eased visa requirements and allowed thousands of people, many of them ethnic Kurds from Iraq, to enter previously tightly controlled border zones.

That the Ryanair bomb threat was a hoax has never been in any real doubt: An email sent in the name of Hamas warning of a bomb and cited by the Belarusian authorities as proof of a genuine security risk was not sent until after the plane was ordered to land in Minsk. Hamas, a militant Palestinian group, denied sending any message.

Suspicions that Belarusian security services had orchestrated the hoax were strengthened by the previously unreported findings of a separate investigation by the police and the prosecutor general’s office in Lithuania. Their inquiries found that a passenger who disembarked after the plane landed in Minsk was a Belarusian man believed to have been recruited by his country’s military intelligence service.

That man, identified as Siarhei Kulakou by Lithuanian investigators, arrived in Vilnius a day before Mr. Protasevich took an outbound flight to Athens for a vacation, and then joined the dissident on the return flight to Vilnius a week later.

To this circumstantial evidence of a secret operation by Mr. Lukashenko’s security services, however, has now been added the testimony of the defector and recordings he bought with him to Poland that establish how the operation went down in the Minsk control tower, the security officials said.

As soon as the plane landed, Belarusian security agents grabbed Mr. Protasevich and Ms. Sapega. Since then, the two have been seen only at a news briefing staged by the Belarusian authorities in June and in government-issued videos in which they confessed, apparently under duress, to organizing “mass unrest.”

An opposition Russian news outlet, Dozhd, reported on Sunday that Belarus had filed formal criminal charges against Ms. Sapega that mean she could face at least six years in prison.

Mr. Protasevich’s whereabouts and fate are not known.