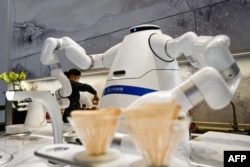 Two-time Paralympic athlete Tyler Carter hopes to reach Beijing on February 25 despite an extra steep hill of obstacles. The 28-year-old alpine skier vying for a spot on the U.S. team is resolved to face a “slew” of anti-pandemic restrictions without blaming anyone.

“It’s just kind of the reality that we’re in, and all reports I’ve had is that China has been doing a great job of keeping everyone safe, making sure appropriate measures are taken,” Carter told VOA from Colorado Springs, Colorado, where he is based.

Carter says he’s OK with the pre-departure virus tests and more on arrival in Beijing’s Yanqing District. He’s prepared to step into the new sports center sight unseen — except on TV during the Games happening now. He practices daily, either in a gym or in the snow. Carter’s foot was amputated when he was a year old.

Athletes already at the Games have just gone through what Carter is about to experience on his journey to Beijing. China’s zero-COVID policy for the Winter Olympics is challenging athletes worldwide, but overall, shows signs of outward success for the host country, analysts believe.

Beijing kicked off the 2022 Olympics on Friday with Chinese President Xi Jinping pledging that China would “do its best to deliver to the world a streamlined, safe and splendid” event.

About 3,000 athletes and their delegations are competing at venues in or near Beijing.

Athletes, journalists and related staff must operate in safety bubbles where they are in contact only with one another. Police and guards open and close the gates for buses and other approved vehicles approaching the fence-ringed Olympic hotels.

Those who are staying inside the bubble must test for the virus daily and live in an environment with climate-controlled sleeping pods, dedicated airport-to-venue buses and robots, not humans, who make them food and cocktails.

Athletes would feel more energized if they could go to Beijing’s bars and mix with locals after their events, said Mark Thomas, managing director of U.K.-based, China event-focused S2M Group sports consultancy. Athletes and analysts have also said it would feel different if the competitors were performing in arenas packed with cheering fans.

Unlike pre-COVID Games, athletes this time have few opportunities to preview their courses or practice in the host city before competing. Additionally, athletes can be barred from events if they test positive for COVID-19, so even leading up to the Olympics, many athletes put themselves in self-imposed lockdowns and adapted their training to ensure they would test negative in order to participate in the Games.

“It’s probably going to make all the people participating in elite sports rustier, which isn’t good, and particularly in sports that are quite dangerous like bobsled, luge and downhill skiing, that’s a risk,” said Joshua Kurlantzick, a senior fellow at the Council on Foreign Relations.

“I think it would be wrong to say this Games is not affecting athlete performance and athlete mood,” Thomas said, “but on the other hand I think there’s a general stoicism within the sporting community that there is a still a privilege to compete and be part and have the ability to be actually doing what you enjoy and competing at the top levels,” he added.

“Can you imagine the experience it would be for an athlete?” said John Swartzberg, a clinical professor emeritus from the University of California, Berkeley.

“You’re going to essentially be flown around the globe to get there and having very minimal interaction with others and certainly no interaction with the outside world and then flown out of there,” Swartzberg said. “And if you become sick or if you test positive, you’re put into isolation, and you may miss your event.”

China’s strategy is all but sure to squelch any spread of COVID-19 by plugging as many transmission channels as possible, Swartzberg said.

China, where COVID-19 was first reported, is keen to stop any cross-contamination between Olympians and its general public after several outbreak clusters and lockdowns in January.

The anti-pandemic restrictions play into many Chinese people’s sense of their country as a disease-free one versus the outside world where multiple countries are fighting the omicron variant, said Scott Harold, a Washington-based senior political scientist with the Rand Corp. research group.

Normally an Olympics host uses the Games to showcase its venue cities and local culture to the world. China’s Ministry of Culture and Tourism is planning a post-Olympics integration of sports, cultural and tourist industries in Beijing and co-host city Zhangjiakou to the northwest, the official news agency Xinhua reports.

In Xi’s remarks at the opening banquet, he said Bejing is “committed to organizing a green, inclusive, open and clean Games, China has made every effort to counter the impact of COVID-19, earnestly fulfilled its solemn pledge to the international community, and ensured the smooth opening of the Beijing Winter Olympic Games as scheduled.”

Carter, the alpine skier, remains upbeat about the possibility of competing in Beijing.

“It’s the only way to make this work, is to keep us in a bubble,” he said.