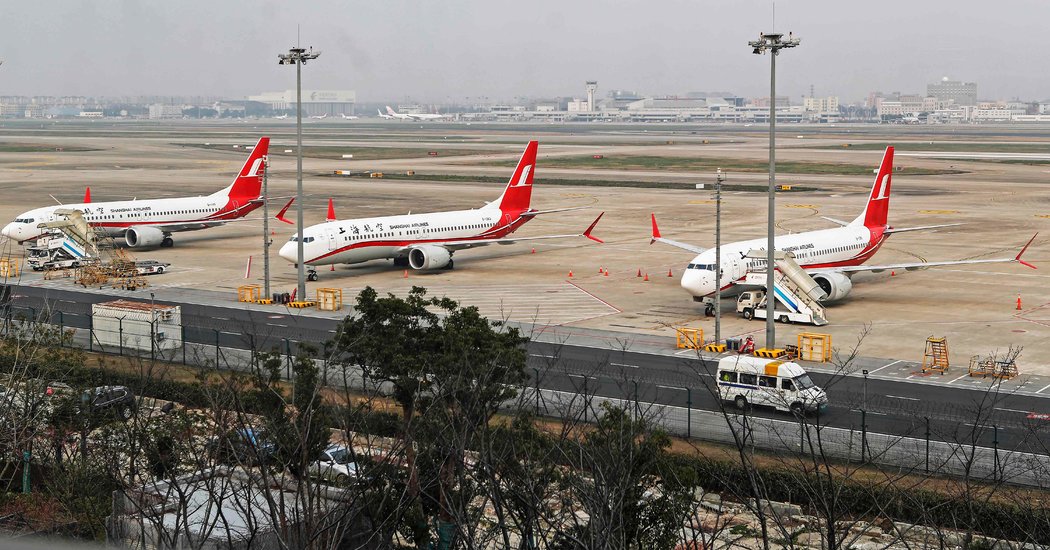 BEIJING — Once known for its deadly skies, China doubled down on aviation safety as it grew in wealth and power.

This week, as it took the lead among world governments in grounding the Boeing 737 Max 8, China showed its willingness to assert itself in airline safety.

Chinese regulators acted swiftly on Monday, grounding 96 of the 737 Max 8 jetliners operated by Chinese carriers less than 20 hours after one operated by Ethiopian Airlines crashed on Sunday. It was less than five months after a similar deadly accident involving that model.

Although dozens of other governments, from Indonesia to France, also banned the flights after China’s decision, it was not until Wednesday that the United States said it would also do so.

That is a big shift from a generation ago, when Chinese regulators largely followed the Federal Aviation Administration’s lead. Today, Chinese airlines are among the safest in the world, according to industry statistics.

“In the past, we mainly acted according to F.A.A.’s decision,” said Lin Zhijie, an aviation consultant in the southeastern city of Xiamen. “If F.A.A. said ‘ground,’ we’d ground, and vice versa.”

Beijing regulators’ willingness to act on their own now, Mr. Lin said, “is a landmark event, and worth watching.”

Investigators are beginning to explore what caused the Ethiopian Airlines crash, which killed 157 people. It is not clear whether the Max 8 has a fatal safety flaw. But the Chinese airline industry said the precautionary move was a sign of its commitment to safety.

“China Eastern Airlines has 14 Max 8 planes, and we have already suspended all of them,” Liu Shaoyong, the airline’s president, said this week as governments and other carriers were still deciding how to react.

“Our primary concern is for the safety of lives and to maintain a strong sense of responsibility,” he said.

The challenge for China will be whether it can sustain its improved safety record as its airline sector continues to grow. In its annual market forecast, Boeing predicted that China would make up nearly one-fifth of global air traffic by 2037, compared with about 14 percent now — an expansion that will require purchasing thousands of planes and training legions of new pilots.

Concerns over training linger. This week, Li Jian, the deputy director of the Civil Aviation Administration of China, cited uncertainties over whether pilots could fly planes manually if they were to encounter problems with automated systems.

The cause of the Ethiopian Airlines crash is not yet clear. But the groundings were driven in part by regulators’ concerns about similarities to a deadly accident in October, when a Max 8 flown by Lion Air crashed off the coast of Indonesia, killing 189 people. Preliminary inquiries into that crash suggested that a combination of poorly maintained flight instruments and a balky automated flight system might have played a role.

“Our pilots have the ability to deal with it — we could simply shut down the computer intervention,” said Noa Sun, a pilot in China of Boeing 737s, although he has not yet flown the Max 8 version of the plane. He also cautioned that, if there was a problem, no pilot would have much time to react.

China has broad ambitions to compete with the United States and Europe in the business of flying airliners. The country is building its own jets, with long-term ambitions to compete with Boeing and with Airbus, the European aerospace giant. China makes airliner electronics equipment and is developing its own jet engines. And its executives now play major roles in international air transport organizations.

Some of these ambitions have raised concerns within the Trump administration because the line between civil and military technology can blur quickly in the aviation business.

For example, the China Aviation Industry Corporation, a state-owned enterprise better known as AVIC, has become a big producer of commercial aircraft components for Boeing. It also makes some of the world’s most advanced stealth fighter jets for the Chinese Air Force. The Trump administration put some kinds of aircraft equipment, like jet engines, in the initial 25 percent tariffs that it imposed last summer on $50 billion a year of goods imported from China.

China has not always been so self-confident in international aviation. A spate of deadly crashes in the 1990s, including seven from 1992 to 1994 that killed a total of 492 people, prompted China to turn to the F.A.A. for help. The F.A.A. sent advisers and provided voluminous information on how it regulated practically every detail of aircraft operations in the United States.

Chinese regulators successfully adopted the same procedures. While other fast-growing economies in middle-income countries have had periodic crashes, China has not had a major crash since 2010. That was when an Embraer ERJ-190LR, imported from Brazil and operated by Henan Airlines, crashed and burned while trying to land on a foggy runway in northeastern China. The crash killed 44 of the 96 people aboard.

Some of the ways China keeps its skies safe are familiar — sometimes, annoyingly so — to frequent fliers. Even in good weather, Chinese airports do not let planes take off or land as quickly in succession as many airports in the West. When thunderstorms threaten, they space out the takeoffs and landings even more. Sometimes air traffic controllers tell pilots to land somewhere else. Long delays lead to frequent stories in the Chinese media of frustrated passengers who start fights or open an emergency door for fresh air. But the measures help keep fliers safe.

China passed the United States in 2005 as the world’s biggest market for the delivery of new commercial jets and has never looked back. But while China initially imported almost everything for its commercial aviation sector, it is working hard to learn how to make planes and equipment itself.

Airbus now assembles dozens of A320 jets, a competitor to the Boeing 737 although not the most advanced version, at an assembly plant in the Chinese port city of Tianjin. AVIC entered a joint venture with General Electric eight years ago to manufacture some of the world’s most sophisticated aircraft electronics.

A lavishly financed state-owned enterprise, the Commercial Aircraft Corporation of China, or Comac, has developed a single-aisle passenger jet, the C919. Near Shanghai’s main international airport, Comac has a sprawling, brand-new campus of more than 110 buildings, some of which are designed for the simultaneous assembly of numerous aircraft.

The C919 had its first test flight two years ago. Comac had more than 500 orders for the plane before that flight even took off, although almost all of them were from Chinese state-controlled airlines. Comac is scheduled to start delivering the aircraft to the state-controlled carrier China Eastern, its first customer, in 2021.

The 158-seat aircraft is designed to compete with Airbus’s A320neo and with Boeing’s 737 Max series.

Chinese officials say their cooperation with airline regulators elsewhere shows their willingness to be part of the international aviation community. They also cite their emphasis on safety, the same factor that led Chinese regulators to ground the Max 8.

“That’s our attitude, to ensure safety and be responsible for the people,” said Wang Yu, the president of Spring Airlines, a budget carrier.