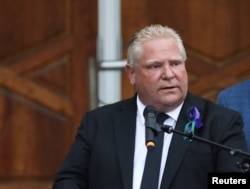 Trudeau made the announcement in an address to the nation Monday after meeting virtually with the leaders of Canada’s provinces.

“These blockades are illegal, and if you are still participating, the time to go home is now,” Trudeau said.

The “Freedom Convoy” protests were started by Canadian truckers who opposed a COVID-19 vaccinate-or-quarantine mandate by the government. The demonstrations have since attracted protesters angry about other pandemic restrictions as well as the policies of Trudeau’s administration.

Trudeau invoked the 1988 Emergencies Act, which allows the federal government to override the authority of Canada’s provinces.

An earlier version of the act has been used only once in peacetime — by Trudeau’s father, former Prime Minister Pierre Trudeau. He used the act in 1970 after a militant group of Quebec separatists kidnapped a British diplomat and a provincial Cabinet minister.

Trudeau said the new emergency measures “will be time-limited, geographically targeted, as well as reasonable and proportionate to the threats they are meant to address.”

On Sunday, Canadian police cleared a convoy of vehicles blocking the Ambassador Bridge connecting Canada and the United States between Windsor and Detroit after the province of Ontario declared a state of emergency to break up the demonstration.

A convoy of trucks and other vehicles has also clogged the streets of Canada’s capital, Ottawa, for more than two weeks, and convoys have blocked several smaller border crossings with the United States.

Also Monday, Ontario Premier Doug Ford said he would lift several pandemic restrictions in the province, the epicenter of the protest movement, but said the move was not because of the demonstrations.

“Given how well Ontario has done in the omicron wave, we are able to fast-track our reopening plan,” Ford said.

The Canadian protest movement has been mirrored in other countries.

Israelis took part in their own freedom convoy Monday. Hundreds of vehicles drove along the main highway from Tel Aviv to Jerusalem and converged on parliament.

About 500 vehicles arrived in Brussels on Monday for a similar protest. However, the vehicles were barred from the city, and police directed them to a parking lot on the outskirts of the city. Protesters then walked into the city where they held demonstrations.

Similar protests took place in France over the weekend.

In other global developments Monday, Hong Kong leader Carrie Lam said that “the onslaught of the fifth wave of the epidemic has dealt a heavy blow to Hong Kong and overwhelmed the city’s capacity of handling.”

She added, “The situation is highly undesirable, and the government feels worried and sorry about it.”

According to Reuters, Hong Kong had a daily infection rate of about 100 at the beginning of February, but that has now ballooned to about 1,300 daily cases and is expected to increase.

Lam said in a statement that Hong Kong would work with China to fight the “aggravating situation.”

In Sweden, the Public Health Agency on Monday recommended a second COVID-19 booster shot for people ages 80 and older to strengthen their immunity against the surging omicron variant.

“Every time we roll out a plan, why can’t we put them to the front?” Myron Quon, executive director of the Pacific Asian Counseling Services, an organization in Los Angeles, told the Post. He said the four tests for families in vulnerable communities “is just not sufficient. Not even close. They’ll have to ration.”

The Johns Hopkins Coronavirus Resource Center reported Monday that there are more than 413 million global COVID-19 cases and 5.8 million global deaths. Over 10 billion vaccines have been administered, according to the center.

Some information in this report came from Reuters, The Associated Press and Agence France-Presse.