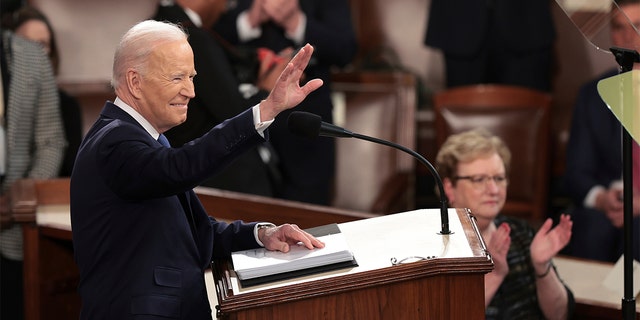 “We have fought for freedom, expanded liberty, defeated totalitarianism and terror. And built the strongest, freest, and most prosperous nation the world has ever known. Now is the hour. Our moment of responsibility. Our test of resolve and conscience, of history itself.” With an eye to generational struggles of the past and a clear focus on the current crises at home, and especially aboard, President Joe Biden delivered his first State of the Union address.

Previous presidential addresses have mostly been a litany of aspirational policies and legislative aims, which Biden certainly touched on. The president discussed at length his domestic agenda, including practical steps to solving inflation, addressing gas prices, staying competitive around the globe, and providing more resources for tackling the opioid crisis.

Yet, his speech to Congress—which came at one of the most consequential moments in modern history—will be likely remembered more for the president’s direct words targeting President Vladimir Putin, corrupt Russian oligarchs, and in support of the Ukrainian people.

One of the most powerful moments of the night came when the Ambassador of Ukraine to the United States, Oksana Markarova, was introduced by the president in the gallery sitting alongside the First Lady. The sustained standing ovation, with many members waving the Ukrainian flag and dressed in the nation’s colors, was a strong bipartisan show of support from the world’s sole superpower.

In fact, Joe Biden, the statesman, has been preparing for this moment his entire career. As he said, “Putin’s latest attack on Ukraine was premeditated and unprovoked. He rejected repeated efforts at diplomacy. He thought the West and NATO wouldn’t respond. And he thought he could divide us at home. Putin was wrong. We were ready.”

NATO is stronger than ever, our European allies are united in a way we have not seen since the Cold War, Japan is preparing to host our nuclear arsenal, and Germany has agreed to increase defense spending and expand their military capabilities. Not since September 11, 2001 has the world been so united against the forces of evil and in support of the principles of liberty.

The president also returned to a key focus he outlined in his inaugural address, when he spoke of the present battle between democracies and autocracies across the world. This battle has intensified over recent weeks, as we’ve seen a large autocratic regime invade a smaller neighbor in an attempt to destroy a functioning democracy. As he said in his address, “in the battle between democracy and autocracy, democracies are rising to the moment, and the world is clearly choosing the side of peace and security.”

After rallying Americans and Members of Congress from both parties in support of the people of Ukraine at the outset of his speech the president pivoted to many key issues at home. The domestic portion of his speech was dedicated to core Democratic Party issues like strengthening unions, advancing civil and LGBT rights, passing the Voting Rights Act, and support of his nominee to the Supreme Court, Judge Katanji Brown Jackson.

Perhaps with an eye towards the upcoming midterms, Biden also spoke about lowering the cost of prescription drugs, helping with childcare costs and making the tax code more fair. But key GOP priorities were not ignored: he gave his support to providing additional funding for law enforcement, investments in modernizing our infrastructure including specifically thanking those Republicans in the chamber that voted for the final bipartisan bill, as well as strengthening healthcare for our veterans.

President Biden’s first State of the Union showcased American resolve, deep patriotism, and a recommitment to the values of democracy and pluralism. His speech had something that all Americans could agree on, and of course, disagree on; but that’s the hallmark of a vibrant, engaged democracy, something Vladimir Putin will never understand.

And something we should never allow the Ukrainians to lose.