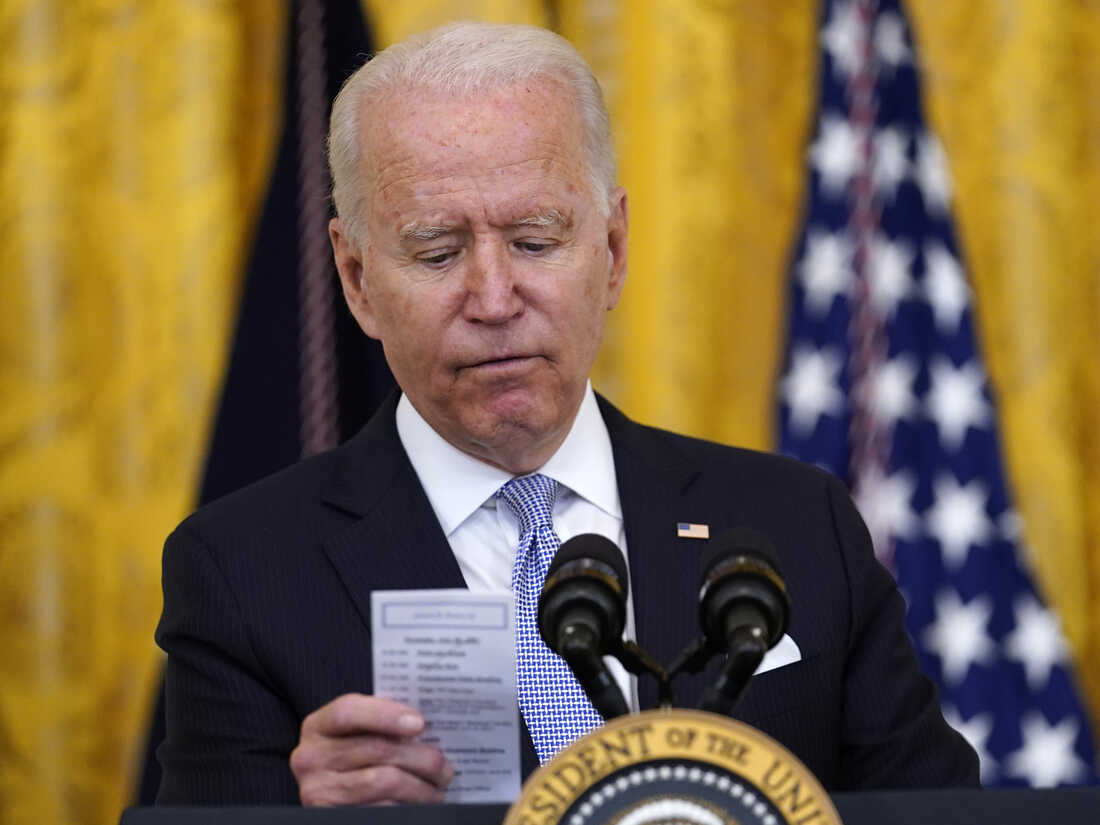 The night before his inauguration, Joe Biden (right) held a memorial for people who had died from COVID-19 at the Lincoln Memorial.

President Joe Biden pulled his daily schedule card out of his jacket pocket and read a number printed on the back.

Biden then held a moment of silence on the White House’s south lawn, which was illuminated by lanterns symbolizing American lives lost to the COVID-19 pandemic. Just a month earlier, on the eve of his inauguration, he had led a similar ceremony at the Lincoln Memorial recognizing the country’s then 400,000 COVID deaths.

“To heal, we must remember,” he’d said. “It’s important to heal as a nation.”

But as the year went on, and the death toll grew, Biden’s emphasis shifted away from remembering and healing. His public statements now focus more on the tactical work of fighting the historic pandemic, as he addresses vaccines, testing, and supplies.

The last time Biden publicly pulled out his schedule card to read the COVID death toll was July 29. The number then was 609,441. Biden’s vaccination drive was hitting a wall of resistance, the delta variant wave had started, and the president now labeled it a “pandemic of the unvaccinated.” He increasingly expressed aggravation with those who hadn’t done their “patriotic duty” to get the shot.

President Biden reads the number of COVID-19 deaths from a card he keeps in his pocket on July 29, 2021.

Kristin Urquiza yearns for a return to those now distant, solemn memorials.

“You know, I lost my dad in May of 2020 and I’m still struggling with it,” said Urquiza, who founded a group called Marked By COVID, which is trying to draw more attention to the lives lost in hope of saving others.

She spoke at the Democratic National Convention, delivering the stinging line that her father’s “only pre-existing condition was trusting Donald Trump — and for that he paid with his life”

She had hoped Biden would keep marking the grim milestones but then 600,000 came and went with little mention.

Kristin Urquiza and her mom Brenda Urquiza at an Oct. 24, 2020 campaign event in Phoenix for Democratic Senator Mark Kelly.

The death toll has continued to rise with little more than written statements from President Biden at each major increase. In remarks Tuesday about the federal response to the fast-spreading Omicron variant Biden paused to mention COVID deaths. He reflected briefly on the empty chairs at the Christmas dinner tables of families who had lost loved ones to the coronavirus before moving on to discuss testing, the economy and schools.

Urquiza says it’s a missed opportunity to remind people of what’s at stake.

“I think a lot of people who have been close to the issue are just feeling like the president used COVID to get elected and not much has changed,” she said.

Carrie Pizano thought she had made it through the pandemic without her worst fears coming true. She’s a nurse in San Diego who participated in a vaccine trial and volunteered giving COVID shots in community clinics.

“Selfishly, I didn’t want to know anyone who died from this,” Pizano said.

Then two months ago, she got a devastating call. Her grandmother was in the hospital and her uncle soon followed. She thought they were vaccinated, but it turns out they hadn’t gone through with it.

Her uncle and grandmother died of COVID within two weeks of each other.

“She had other ailments going on but she did not need to die alone struggling to breathe,” Pizano said. “It was not necessary and it’s completely devastating and heartbreaking for me to know that’s how my sweet grandmother died.”

Pizano feels like the rest of the country has moved on. She sees people out shopping not wearing masks and hears complaints about COVID fatigue. But she can’t turn away. She sees unvaccinated patients sick with COVID at her hospital and she’s still raw with grief over the loss of her grandmother and uncle.

People may be done with COVID, but the loved ones of 800,000 people and counting will never be the same, she said.

“I’m sorry that you don’t want to see it,” she said, anger in her voice. “This is called reality.”

Carrie Pizano and her grandmother Joanne Clark in 2019. Clark died from COVID-19 in October 2021. “She did not need to die alone, struggling to breathe,” Pizano told NPR.

Biden is focused on the rapidly shifting fight

Biden administration officials say they are focused on the current difficult reality: a rapidly shifting fight with a new variant now raging. For now, their focus isn’t on mourning.

There’s also a question of whether it makes sense for Biden to pause on recognizing the growing number of deaths, says presidential historian Tevi Troy.

“It would be weird to do a marking every hundred thousand deaths,” said Troy, who wrote a book about how presidents have responded to crises. “It’s almost an acknowledgement of failure every time you get that new number in front of all the zeroes.”

Troy said he understands why Biden’s first instinct was to mark the milestones. It was a break from his predecessor who didn’t acknowledge them and there was a sense when Biden came into office that vaccines would soon bring the crisis to an end.

When he was running for office, Joe Biden began frequently citing the number of COVID deaths from a card he carries in his pocket. This file photo is from Sept. 9, 2020.

“We in the United States have a way of commemorating events,” said David Oshinsky, a Pulitzer Prize-winning medical historian at NYU. “Generally we commemorate them when they’re over.”

With the end of polio in sight, President Eisenhower held an event in the White House Rose Garden in 1955 to honor Jonas Salk, the man who developed the life-saving vaccine.

“This was like commemorating the end of World War I,” Oshinsky said. “I mean, a war had been won. A medical war against an insidious childhood crippler, it had been won.”

But this is not that moment. Biden should hold off on another memorial until COVID is less frightening and killing far fewer people, Oshinsky said, because with each public memorial, the commemorations lose some impact.

Drawing attention to COVID deaths may not be a political winner

Still, drawing more attention to the lives lost could have an impact, said Joshua Sharfstein, who specializes in public health at Johns Hopkins University and served in the Obama administration. He said losing a loved one is terrible no matter your politics, so talking about it could help heal a nation divided over COVID.

“I think there’s an opportunity to use the common pain that people feel to try to bring the country together,” said Sharfstein.

Republican pollster Frank Luntz agrees. If Biden talked more about those who have died — 400,000 since he took office — he could move people to get vaccinated, Luntz said. But drawing attention back to COVID, the failure to contain it, and the number of people still dying, is not a political winner.

“As a political adviser, I’d say to him, if you want to be a statesman, talk about these key milestones,” Luntz said. “If you want to get reelected, ignore them.”