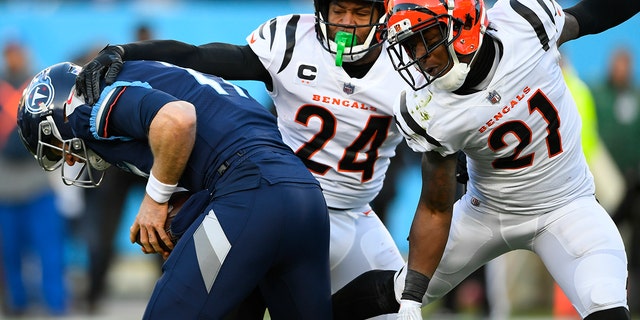 Are the Cincinnati Bengals the first team that comes to mind when it comes to 2021’s free agency spending?

The Bengals invested $24 million in March on cornerback Mike Hilton as they finished revamping their starting secondary — a process started in the previous free agency — and it seems to be paying off.

The former Pittsburgh Steelers — and one of the league’s best slot men — helped secure Cincinnati’s win over the Tennessee Titans on Saturday.

At a crucial moment in the Bengals’ divisional round playoff game — just as the Titans seemed to be gaining momentum, and were at Cincinnati’s 9-yard line — Hilton intercepted a pass from quarterback Ryan Tannehill intended for wide receiver Chester Rogers and brought it back to the Bengals’ side.

Hilton jumped to bat the ball in the air and snatch it. He could have even had a chance to return it had Tannehill not run to tackle him after the INT.

After going undrafted out of the University of Mississippi, Hilton signed with the Jacksonville Jaguars as an undrafted free agent in 2016.

While Hilton got the interception and took it 19 yards, he wasn’t the only Bengal who intercepted a Tannehill pass. Bengals safety Jessie Bates III and linebacker Logan Wilson cashed in on INTs, too.

Titans DB Armani Hooker grabbed a Burrow pass shortly after Hilton’s interception and gave the offense a chance to score in the third quarter.

Cincinnati Bengals cornerback Mike Hilton (21) celebrates and interception he made against Tennessee Titans quarterback Ryan Tannehill (17) during the second half of an NFL divisional round playoff football game, Saturday, Jan. 22, 2022, in Nashville, Tenn.
(AP Photo/Mark Humphrey)

The Bengals went on to beat the Titans 19-16 in Nashville and will face the winner of the Chiefs vs. Bills matchup in the AFC Championship.