Consumer packaged goods companies (CPGs) and retailers are among the largest intermodal shippers. Today’s edition of The Stockout highlights data relevant for shippers that utilize rail intermodal or are looking to move in that direction for transportation savings and/or to promote dedication to environmental, social and governance (ESG) initiatives.

Will there truly be a peak season for rail intermodal this year?

October is the traditional peak month for intermodal volume. In light of the goods shortages during the past couple fall shipping seasons, that peak was elongated into November and even December and January, as shown in the volume chart above.

In advance of that seasonal peak, domestic intermodal volume typically starts to pick up in August (see 2019 and 2020 above in blue and green, respectively). That hasn’t happened so far this August, which may be related to the largest retailers canceling billions of dollars of inventory, as consumers eschew big-ticket discretionary purchases.

Why an intermodal fall peak season matters to shippers

The presence or absence of a peak season will likely influence the trajectory of intermodal contract rates next year.

Contracts are most heavily bid early in the year, and the negotiating power typically follows the prior fall’s peak season — there is more upward pressure on rates when the previous fall’s peak season was strong. That was the case the past two years with intermodal contract rates rising at double-digit percentages from 2020-21 and again from 2021-22 after seasonal peaks in late 2020 and late 2021.

In addition, intermodal contract rates rose steadily throughout the year, both in ’20 and ’21. Now, nearly two-thirds through ’22, intermodal contract rates are roughly in line with the beginning of the year. The potential lack of a meaningful upcoming peak season, in addition to intensifying competition from the highway, could cause downward pressure on rates during the early ’23 bid season.

There have been plenty of anecdotes from shippers about poor rail service and the chairman of the Surface Transportation Board is not optimistic about rail service levels and also concerned with the railways’ ability to effectively service the fall grain harvest.

While many of those comments apply to rail carload traffic, it’s clear from recent data that rail intermodal service also remains poor. The data below highlights continued intermodal service issues. The chart below shows that three of the five Class I railroads have more loaded intermodal railcars in their systems that have not moved in 48 hours than respective historic averages. BNSF and Norfolk Southern have the most unfavorable variance versus history, with the number of intermodal cars delayed by two days or longer 124% and 96% above respective historical averages, as shown below.

The Class I railroads have largely blamed labor availability as being the primary reason for the service issues.

In past cycles, after terminating or furloughing workers during volume downturns, the railways had no problem hiring or rehiring workers when volumes again returned. That didn’t happen this time due, I believe, largely to morale issues as employees were required “to do more with less” and spend more time away from home.

The chart below shows the weekly average of intermodal trains on the BNSF railway held per day, broken down by cause. The volume of intermodal trains held on BNSF in recent months exceeds the number from the middle of last year, a period of very poor rail service. In addition, the reasons for trains held certainly include available crews (shown in dark orange — a factor that seems to have intensified of late) and locomotive power, in addition to “other” factors, such as general congestion). 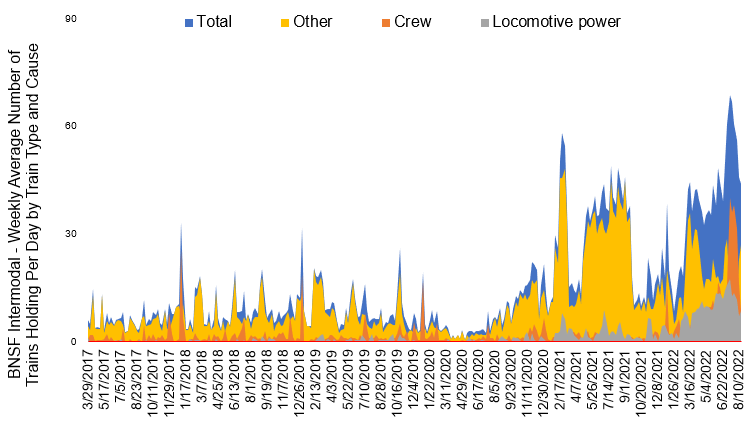 Intermodal’s competitiveness with truckload has intensified

The Intermodal Contract Savings Index is a measure of the difference in rates between dry van and domestic intermodal on the same origin-destination pairs (same three-digit ZIP codes) with fuel surcharges included for both modes.

For all lanes greater than 400 miles — lanes shorter than that are assumed to be truck-only lanes — the intermodal savings rate is 12%, down from 18% last year but still near the midpoint of the historic 10%-15% discount. What’s more interesting is the Long Haul Intermodal Contract Savings Index, which includes only lanes that exceed 1,200 miles (white line above), has declined from nearly 30% at this time last year to 16.8%.

Part of that decline is timing — truckload contract rates respond faster to market conditions than intermodal rates. In a declining freight market, that results in a narrowing spread. The decline in the intermodal savings rate on long-haul lanes implies that dry van contract rates are moving lower in those lanes, which likely includes many lanes outbound from Los Angeles, a truck market that is unusually loose for this time of year.

For example, the average dry van spot rate in the Chicago-to-Atlanta lane declined 36% since March. Highlighting the intensifying competition, domestic intermodal provider Hub Group reported that its “local east” intermodal volume (volume that originates and terminates in the Eastern one-third of the U.S.) declined 14% year over year in the second quarter, and the company attributed its share loss to highway carriers that participate in the spot market.