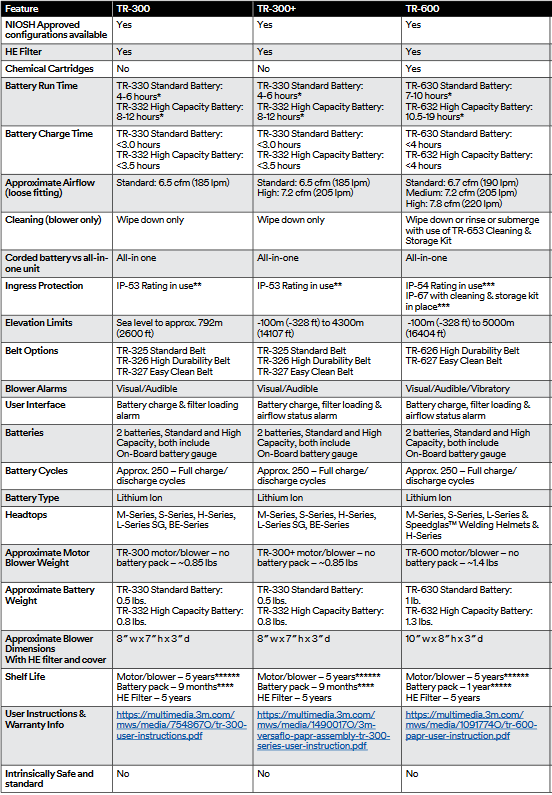 As the COVID-19 pandemic continues to spread, modern healthcare workers and first responders are once again tasked to continue combating the virus. However, as innovations and directed actions have been taken over in the last year to incorporate certain safety measures and uniform protections for frontline workers—respirators and other personal protective equipment (PPE) have been in increasingly high demand.

In an effort to provide modern healthcare workers, along with many other essential professions, with the equipment needed to conduct their work safely—3M has released and adapted their TR-300+ and TR-600 Versaflo Powered Air Purifying Respirators (PAPR) series to defend workers against an ongoing problem with no simple solution. By providing longer battery life, ease-of-access, and adaptive use, as well as methods for simple sanitation and widespread distribution—these series have become invaluable to the modern healthcare worker.

Which PAPR is Better for Your Industry?

Below is the official product comparison chart for the Versaflo PAPR product lines, as provided by the manufacturer 3M. While both the TR-300+ and TR-600 have some important similarities making all of them reliable options for someone looking for a respirator, there are some differences that a potential user should consider if they want to ensure it meets their exact needs. To assist with this task, a series of notable differences between the two product lines are mentioned beneath the chart.

While the various models between the 300+ and 600 series offer similar masks, and soft-cap head coverings—it is important to note that the 600 series heavy-duty models also feature hard-hat equipment for welding. That said, the 300+ series offers the M-307 which can still be used for general heavy-industrial environments.

A small change that has allowed the 300+ series to improve upon the 300 series is the implementation of airflow adjustment. While the 300+ improves the amount of air able to be received, it doesn’t have the high 220-lpm of the 600 series—maxing out at 205-lpm.

While both series offer audible and visual alarms to let the user know when the product is running out of battery or unable to properly filter; in keeping with the plausibility of more industrial use, the 600 series also features a vibratory alarm.

One of the most notable and immediate differences between the 300+ and the 600 series is length of time for a single use, as well as the ease of cleaning. While the materials for both offer the same shelf-life and maximum number of chargers per-battery—there are features which make the 600 series more convenient for extended-use and rapid-cleaning.

The 300+ series battery ranges from 4-6 hours and 8-12 charge-time respectively. In comparison, the standard battery-life of the 600 series is 7-10 hours while the high capacity is 10.5-19. While the 600 series is more effective for longer work periods, it does come with some minor downsides. For example, the 300+ batteries take around 3 hours to charge, as the 600 series take 4 hours.

Both series have options for disposable shrouds that protect the skin around the mask. Additionally, the blower on both systems can be comfortably cleaned with a wipe-down. However, an added option for the 600 Series, not available to the 300+, is the ability to implement submersible cleaning with the TR-653 Cleaning & Storage Kit.

Comfort, Versatility, and Ease of Use

One of the most important things for modern healthcare workers is how easy each respirator is to use on a long shift.. That said, while the 600 series is remarkable for its battery life and industrial use, it wasn’t designed with frontline workers in mind. While the 300+ series is founded around versatility and patient interaction.

A key thing to note in regards to comfort is simply the weight of the blower and battery—both of which the 300+ series is less than the 600 series. While it may not last as long, everything from the mask to face shield to ergonomic design was framed around a long work day for the 300+ series.

While the 600 series and 300+ series are very similar in design, functionality and use—it is important to note that the 300+ series was created with the COVID-19 pandemic directly in mind. After hearing responses from frontline workers, 3M pivoted to adapt and make sure the 300+ series could be used to benefit a broad range of healthcare and pharmaceutical workers. That being said, some of those innovations carried over to the modern 600 series, as it can cater to multiple branching industries while also adhering to necessary healthcare desires.