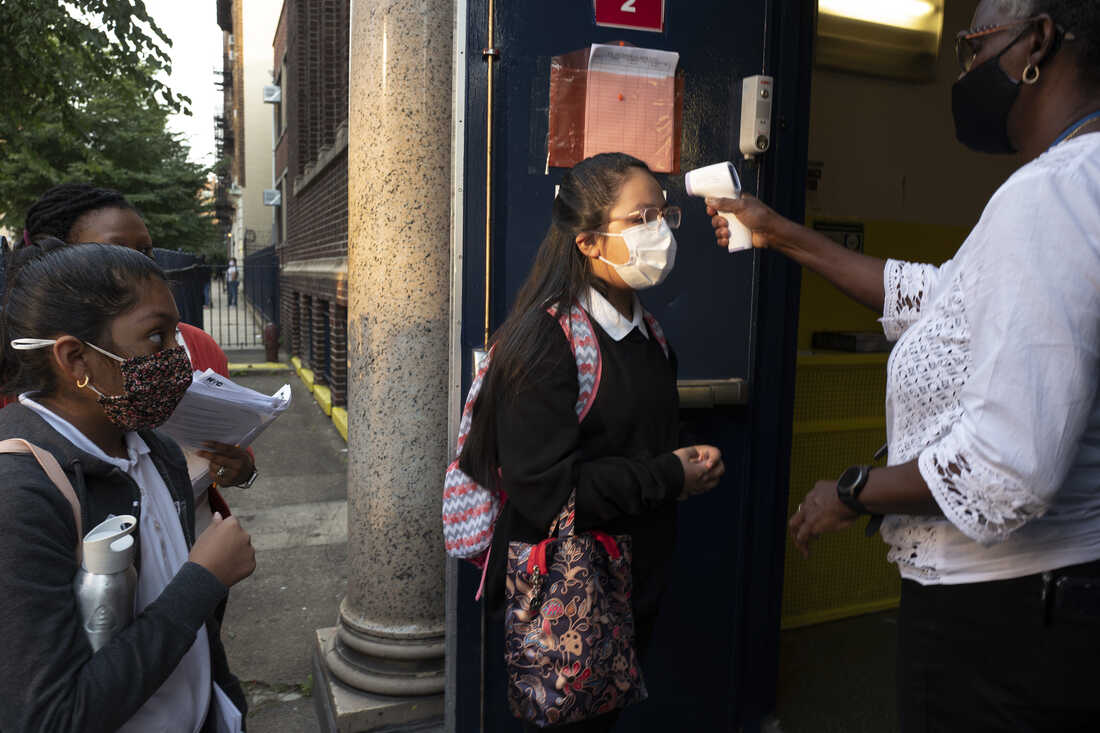 A girl leads her mother and brothers as they arrive at Brooklyn’s PS 245 on Monday in New York. Classroom doors are swinging open for about a million New York City public school students in the nation’s largest experiment of in-person learning during the coronavirus pandemic.

The first day of school coincided with several milestones in the city’s pandemic recovery that hinge on vaccine mandates.

Nearly all of the city’s 300,000 employees were required to be back in their workplaces, in person, Monday as the city ended remote work. Most will either need to be vaccinated, or undergo weekly COVID-19 testing to remain in their jobs.

The city was also set to start enforcing rules requiring workers and patrons to be vaccinated to go indoors at restaurants, museums, gyms and entertainment venues. The vaccination requirement has been in place for weeks, but had not previously been enforced.

There will also be a vaccine mandate — with no test-out option — for teachers, though they have been given until Sept. 27 to get their first shot.

Unlike some school districts across the country that are still offering online instruction to families that prefer it, New York City officials provided no remote option despite the persistence of the highly transmissible delta variant of COVID-19.

New York City kept schools open for most of the last school year, with some students doing a mix of remote and in-person instruction, but the majority of families chose all-remote learning. That choice won’t be available this year, Mayor Bill de Blasio has insisted.

“There are kids who have not been in a classroom in a year and a half, and they deserve better,” de Blasio said Monday. “Kids need to be back in school for their mental health, their physical health, their ability to develop socially, and for so many reasons.”

U.S. Secretary of Education Miguel Cardona visited a Bronx elementary school and appeared remotely at the mayor’s briefing to praise the city’s school opening plan. “They did it right, and I know this is going to be an awesome year for New York, for everyone,” Cardona said.

Masks are required, as are vaccinations for some sports

Masks will be required for all students and staff members, as is the case in schools across New York state.

Samiya Ramdial’s mask was firmly in place for the start of first grade at Public School 33 in Manhattan — and so were her spiffy black sneakers.

“These are great shoes,” Samiya said. “I can dance in these.”

Under the city’s blended learning model, Samiya was in kindergarten in person part-time last year and learned remotely the rest of the time.

“She preferred in person of course, because she got to see her friends, and she enjoys being with the teachers as well,” her mother, Christina Brea, said.

A girl has her temperature checked as she arrives for the first day of school at Brooklyn’s PS 245 elementary school on Monday in New York.

There is no vaccine mandate for students 12 and over who are eligible for inoculations, but vaccinations will be required to participate in contact sports like football and basketball as well as some extracurricular activities like band practice and theater. About two-thirds of the city’s 12-to-17-year-olds are currently vaccinated.

In the U.S., anyone 12 and older is eligible for COVID-19 vaccines. The Food and Drug Administration’s vaccine chief said last week he is hopeful children as young as 5 will be eligible to get vaccinated by the end of 2021.

Teachers and parents are pushing back

De Blasio, a Democrat in his final months in office, has insisted that masks, cleaning protocols and random COVID-19 testing makes school buildings safe. But he has gotten pushback both from parents who want their children home and from unions representing teachers and other school staff members.

The city has been in arbitration with the United Federation of Teachers, which represents almost 80,000 teachers in city public schools, over issues including accommodations for teachers who say they have health issues that prevent them from being vaccinated.

The arbitrator ruled late Friday that the city must offer non-classroom assignments to teachers who aren’t vaccinated because of medical and religious exemptions.

A mother gives her son a kiss as he arrives for the first day of class at Brooklyn’s PS 245 elementary school on Monday, in New York.

Under the school system’s coronavirus protocols, if there is a a positive case in an elementary school classroom, students in the class will receive remote instruction while quarantining for 10 days. In middle schools and high schools, only unvaccinated students will quarantine.

De Blasio said he does not expect many classrooms to close.

“We do not expect to see anywhere near the kind of closures or classroom disruptions that we saw last year,” he said Monday.

City and workers clash over full-time return to the office

Meanwhile, other unions for city workers have objected to the mayor’s decision to order employees back into workplaces, saying that if they were performing their jobs well remotely, they should be allowed to continue.

“The way that this full-time return to office was rolled out with less than two weeks notice has been the part that has been so disorienting,” said Ashley Firestone, who works for the city’s Department of Cultural Affairs.

“There are so many aspects of this that have not been considered and thoughtful in a humane or empathic way to the humanity of the workers that have been putting themselves on the line for the last 18 months on behalf of the city,” she added.

Some city employees like Yvette Santiago had been back to work on a limited basis. But the mandatory full-time return will require some adjustment.

“The return to work has been a little anxious,” said Santiago, the director of the Department for the Aging. “I’m just trying to adjust.”

The Municipal Labor Committee, an umbrella group for unions representing municipal workers, has also threatened legal action if the mayor moves to eliminate the option of weekly virus testing for workers who opt not to get vaccinated.

Around the city, enforcement of vaccine mandates began

The outbreak had disrupted much of public life, including the shuttering of restaurants and other gathering places. City officials have pushed for vaccinations to prevent the further spread of the virus, particularly more highly transmittable variants that could prompt another round of mass closures.

At the Museum of Modern Art in midtown Manhattan, lines formed at the door as patrons swiped through phone apps or dug into their wallets for their proof of vaccination.

And a group of restaurant and bar owners has sued over the vaccination requirement for indoor dining and employees, saying the city has overstepped its legal authority.

Allison Torres, a server at Court Square Diner in Queens, had turned away nearly a dozen customers by midmorning, including a regular.

“I’m sorry, today is when they go strict,” she explained to a couple of young men before turning them away because they did not have proof they’ve been vaccinated.

Torres said the diner would follow the rules “because they’re the rules — but we don’t have to like it.”